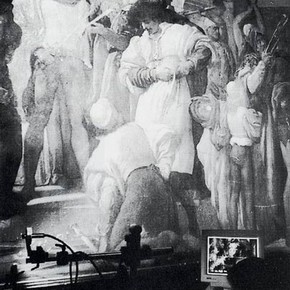 Conservation of Lord Leighton's frescoes, a V&A project to mark the centenary of his death in 1996. (click image for larger version)

'The Industrial Arts Applied to War' and 'The Industrial Arts Applied to Peace' were painted by Frederic, Lord Leighton in the late nineteenth century as the crowning achievement of the South Court of the South Kensington Museum. In February of this year the Victoria and Albert Museum undertook to have both paintings conserved in a six-week programme of work by a team of students from the Courtauld Institute's Conservation of Wall Painting Department. Their conservation is part of a wider effort by the Museum to mark the centenary in 1996 of Leighton's death (see 'Leighton Centenary 1996 '  below), which will include a Study Day and displays devoted to the artist's work.

Leighton worked on the monumental paintings between 1878 and 1886. 'War' was completed first in 1880 when it was described in The Athenaeum as 'a very fine illustration of culture in art, backed by a rare sense of what is beautiful and graceful in invention, treatment, and all technical qualities'.1 'War', as its title implies, depicts the preparation for warfare, and its setting is the Italian early Renaissance: men and boys tend to their armour and test their swords, cross-bows, and other weapons, while the few women present embroider banners. The architectural setting for 'Peace' is an idyllic classical one in which the fruits of labour and commerce are shown in all their bounty.

The paintings were not only ambitious in scope but also experimental in their technique. The decoration of the new Houses of Parliament in the mid-nineteenth century saw the embarrassing failure of true fresco (see footnote ) painting in England, but nevertheless generated a revival in mural practice. In 1862 Thomas Gambier Parry published his recipe for spirit fresco, a system for painting on walls which substituted a complex mixture of beeswax, oil of spike lavender, spirits of turpentine, elemi resin, and copal varnish for the inorganic process of true fresco. It was promoted as the solution to all the problems of painting on a grand scale: the elusive qualities of true fresco - durability, a matt surface, and luminous effect - were all guaranteed, without the drawback of a limited palette. Leighton became an enthusiastic advocate of the new technique, putting it into practice most notably in the painting of 'War' and 'Peace'. 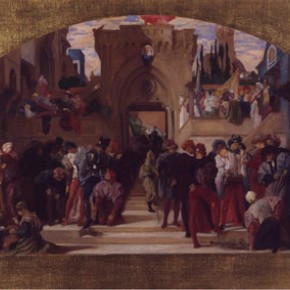 Although Leighton painted 'War' in strict accordance with Gambier Parry's instructions, he introduced a number of modifications when he came to paint 'Peace'. The spirit fresco technique demanded, among other meticulous preparations, a rough plaster ground to encourage maximum penetration of the medium. Leighton disliked this effect and applied a smoother ground for 'Peace', altering the painting process accordingly. This fundamental difference between the two paintings is reflected in their quite different histories of deterioration and restoration which began much sooner than Leighton or Gambier Parry ever imagined.

In a very short time both paintings were obscured by accumulated atmospheric dirt. More alarmingly, 'Peace' began to suffer from powdering paint, discoloration, and the mysterious exudation of the medium - faults which can be attributed to Leighton's modified painting technique. Between 1896 and 1942 these problems became persistent, and both paintings underwent extensive restoration treatments often one year after another. Early cleaning attempts on 'War' tended to remove paint from the peaks of the granular plaster surface while leaving dirt in the troughs. To disguise this, the painting was covered with a wax varnish which was frequently polished to saturate the appearance of the colours. In 1933, defective exterior guttering caused considerable damage in the upper part of the painting.

In general, however, 'War' remained largely stable and escaped with fewer interventions than 'Peace'. The smoother plaster surface of Leighton's later painting lent itself to rather more aggressive cleaning and, as a corollary, wholesale repainting. In its relatively short history, 'Peace' has been cleaned no fewer than 11 times - with rainwater pressed on with sponges, soft bread, ammonia solution, cold water containing Fuller's Earth, Castille soap, saponin and water, and pumice powder to name a few methods - and has been repeatedly recoated with spirit fresco medium and wax-resin varnish to preserve the fugitive paint.

In 1950 the construction of partitioned galleries reduced the viewing area of the paintings to the status of dimly lit corridors. The history of treatment of the paintings and their large scale were major factors in circumscribing the latest conservation effort, which from an early stage was envisioned as limited in scope. On 'Peace', surface dirt was removed with silicone-based sponges, and very dirty areas swabbed over with saliva. These measures produced a slightly shiny effect - an undesirable quality when the painting now has to be viewed at such close range - which was counteracted by applying white spirit to 're-form' he wax-based preservative still present on the painting and re-establish its matt appearance. Although extensive cleaning tests were carried out on 'War', any perceived advantages were far outweighed by the problems associated with the granular paint surface, and it was decided to do no more than remove surface dirt with soft brushes. Greater priority was given to the repair and reintegration of the recent damage, again associated with the defective guttering, and to the reduction of extensive surface blooming which had resulted from water infiltration.

In effect, the latest treatment of Leighton's paintings has been very superficial and the conservation methods employed have hardly broken new ground. The greatest improvement to the viewing of the paintings will be made by the introduction of new lighting. What has made this a particularly interesting all-round project has stemmed in large part from the wealth of archival material relating to the physical history of the paintings. The study of this material - in conjunction with extensive current documentation which included video microscopy, infra-red reflectography and UV light examination - helped to define a more restrained conservation approach. It is hoped that it is an approach which will once more revive appreciation for these notable paintings.

The V&A is commemorating the centenary of the death of Fredrick, Lord Leighton, with two displays. A major research and conservation project during the last two years will culminate in the opening on 15 February 1996 of Leighton and South Kensington, in Galleries 107-9 and 102. At the heart of the display will be the two frescoes 'The Industraial Arts Applied to War' and 'The Industrial Arts Applied to Peace', discussed in the above article by Stephe Rickerby. These great frescoes adorned the lunettes at each end of the South Court, once the architectural centrepiece of the South Kensington Museum. 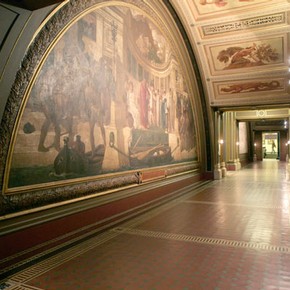 After the radical architectural alterations of the post-War period it became difficult to appreciate the breathtaking quality of Leighton's works which will now become apparent once again. In addition to the conservation and relighting of the frescoes, the present display restores much of the original elaborate decorative scheme, including ceiling paintings by Godfey Sykes, Frank Moody and W.E.F. Britten. Leighton and South Kesington outlines the history of the frescoes and includes the elaborate half-size cartoons for each image.

On public display for the first time, also newly conserved, is the full-size cartoon for 'The Industrial Arts Applied to Peace'. Alongside these large works will be a series of pencil drawings relating to the composition, on loan from Leighton House. A second display, 'Leighton as a Book Illustrator', in the National Art Library display cases, will examine a neglected area of Leighton's output, bringing together the illustrations to George Eliot's 'Romola' with the artist's more dramatic illustrations to Dalziel's 'Bible Gallery'.