New Working Practices - Could we do it like that? 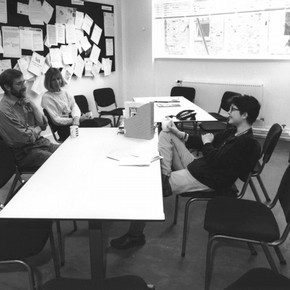 The move to new accommodation within the Museum was seen as an opportunity to review how the Department currently operated and how it could be improved.

A working party of three conservators - Marion Kite (Textiles), Pauline Webber (Paper) and Fi Jordan (Ceramics) - and I were chosen to look at this issue. The work done by this party applied to the whole Department and not solely those sections that were moving into the new building.

Five key areas were identified for examination: communications, work practices, improving the working environment, common space and any 'other' issues. We started to tackle these subjects by asking all members of the Department for their input and opinions. From the responses we received it became clear that we had some sensitive subjects to consider.

'Communications'; focused primarily on information technology and office automation and how the Department could best harness the resources that it already had available to it. The discussion ranged from how to structure network drives and identifying the need for 'voice mail' to where to put the photocopier.

The most sensitive area of our brief proved to be that of work practices. We discussed what percentage of a conservator's time should be dedicated to 'hands on' object treatment and whether it would be feasible to have certain days during the week as 'Conservation Days' when the Department effectively closes its doors to the outside world to concentrate solely on object treatment. We also looked at how enquiries could be dealt with in a uniform and efficient way and debated the issue of whether private work should be allowed to be performed in studios, outside working hours. These proved to be emotive issues for some members of the Department, which would require a change in the Department's culture to be resolved.

'Better Working Environment'; concentrated on the maintenance and cleanliness of the studios and we identified basic standards that should be adhered to. As with most large organisations, the same issues are often addressed from different angles, and the majority of our recommendations on this topic have been implemented in the new studios.

'Common Space'; provided an agreed framework for the use of shared resources such as the coffee lounge and library, to eliminate possible conflicts in the future. Other matters was mainly concerned with how we communicate externally and identified the need for focused and informative handouts.

Aside from agreed studio maintenance schedules, little as yet has changed following the submission of our recommendations. However, I am grateful for the opportunity to work with people whom I would not normally have the opportunity to. It also provided a great insight for all concerned into the issues facing other sections in the Department. Forming this party shows a positive step by the Heads of Groups to improve both how the Department runs and the environment in which we work. Hopefully when resources are available - both time and money - the other issues that we raised can be addressed and resolved.