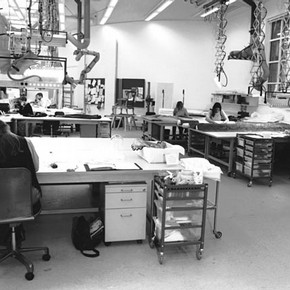 Until December of last year, Textile Conservation occupied three separate sites. The main studio was situated at the top of the lecture theatre stairs and had been used for some form of conservation activity since 1909. For many years it was known as the Art Workroom and a curious combination of sculpture and textile repair was carried out side by side. In the early 1960s, tapestry and carpet conservation moved to the North Yard and remained there until the beginning of 1993 when the studio was demolished to prepare the site for the new RCA building. In the interim period, tapestry and carpet conservation moved to temporary accommodation at Blythe House, at Olympia. A third studio was established in the 1970s under the direction of Sheila Landi, former Head of Textile Conservation. This was housed in the converted stable block at Osterley Park House in West London and was specifically designed for the conservation of very large objects and long term projects.

The separation of activities into three areas had some advantages. Specialist skills developed in each of the three studios. The main studio dealt with an enormous range of smaller objects, encompassing costume, accessories, flat textiles (up to a manageable size) and ecclesiastical and archaeological textiles. Tapestry conservation inevitably involves very long term work, generally carried out on a frame and needs a different kind of skill. Osterley concentrated on very large projects such as Indian palampores (covers), bedhangings and some large costume projects; it also offered conservators a rare chance to work on practical projects without interruptions. Three locations also provided opportunities for students and interns to benefit from three very different working environments and areas of expertise within one institution.

The disadvantages were obvious. It was often difficult to maintain unity within the team; there were frequent problems with communication; staff working at Osterley, albeit an idyllic setting and one of the most beautiful studios in the country, were often isolated and felt out of touch with the main focus of the Museum. Coming into the Museum for meetings and seminars was time-consuming and this problem was magnified when tapestry conservation was forced to move to Blythe House. Equipment was duplicated, but in many cases objects had to be moved offsite to take advantage of specialist facilities such as the washing floor or the vacuum hot table at Osterley.

The primary concept behind the planning of a new central studio was to integrate these three separate areas and provide a facility worthy of both an unparalled collection of over 100,000 textiles from many different cultures and a highly skilled and dedicated team of conservators. In the initial stages and in consultation with conservators, the designers looked at the essential functions which are necessary for a textile conservation studio. These included the separation of wet and dry areas including a purpose built washing floor, large flexible spaces which could be used for a variety of activities, defined areas for the use of dyes and solvents; efficient fume extraction, adequate storage for materials and dummies, and enough space for each conservator to embrace work not only on a variety of textile types but also to have individual areas for paperwork. In addition there had to be enough space for filing, slides and reference material and improved access to computer facilities. 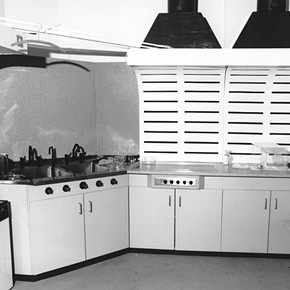 The initial layout of the studio was possibly the least complex part of the planning. The space allocated was the largest that could be offered and had easy access. A ground floor location was essential for moving large objects in and out of the studio. There was little debate about the location of the main functions - the wash floor and wet area, the main working areas and the separate area for dyeing and the use of solvents. Three major difficulties emerged at this stage. The studio did not provide enough wall space for the construction of sidebenching (for paperwork and the use of computers); there was not enough storage for materials and haberdashery and there was the major question of how we could accommodate the amalgamation of work from two studios dealing primarily with very large and long term objects (some projects at Osterley utilised table space for a number of years rather than months).

Extra wallspace was provided, with some reservations, by the construction of a low partition dividing the main working space into two areas, one designed to deal with larger objects and housing two tapestry frames and large mobile tables; the other designed to cope with smaller objects, equivalent to the function of the former main studio. Extra storage space was negotiated in a room opposite the studio which is fitted with an object store and roll racking for support fabrics. Additional storage for haberdashery was achieved by utilising a mezzanine area. We also obtained a second, smaller studio on the fourth floor as a very necessary overspill space for projects which may involve the concurrent conservation of a number of large objects. 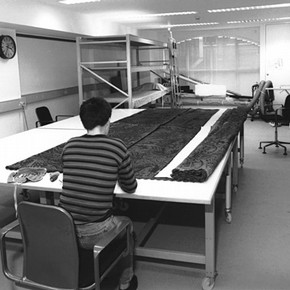 The finished studio is architecturally beautiful. It is a clear, streamlined and exciting space with 13 workstations. With a team of nine this gives us the scope to include students, contract workers and interns who can all benefit, as we can, from observing a whole range of different conservaton projects being worked on in one location. The ceiling height of 4.5m is not only visually stunning but a real bonus when assessing very large objects. The mezzanine store replaces an invaluable facility which existed at Osterley - the ability to view an object hanging on the hoist from above and assess it from a distance.

The large washfloor will be complemented by a lightweight gantry which will enable us to reach the centre of large carpets and tapestries during wetcleaning. Almost all of the equipment is mobile, giving us an infinite variety of flexible space which can be used in any way according to the demands of the project. Tables designed for the conservation of large objects are adjustable in height for those occasions when it may be easier to stand when working. Each conservator has a much more generous space around their workstation and tables can be moved into different positions to facilitate the addition of frames.

Moving into a new studio is a bit like moving house. Not everything is exactly as we imagined it would be and as we continue to work with the new studio we become more conscious of adjustments that still need to be made. However, for the first time in many years the textile conservation team is in one location. This is a wonderful new freedom and is already releasing many fruitful ideas. We look forward to the opportunities which this new integrated studio will produce.