Nappies at the National Museum of Childhood 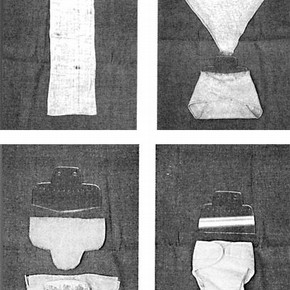 It is not generally realised the National Museum of Childhood at Bethnal Green (NMC) holds one of the most important and comprehensive collections of children's dress in the world, numbering over 4000 items.  The collection dates from the 16th century to the present day and includes general dress, accessories, fancy dress and baby clothes.  The baby clothes are an important part of this collection and NMC holds the only swaddling bands from the 16th century that are known to have survived.

During the past three years over 150 objects from this collection, including 26 mounted figures, have been displayed in the top floor galleries at NMC and a programme of rotation has been instigated in order to keep these displays up to date and to 'rest' the objects that should only be on display for a limited time.  Nappies are a universally necessary item for the care of small babies, so it is not surprising that a small display of nappies was included in the latest rotation of the Birth and Infancy Gallery.  The nappies chosen included a 17th century linen tailclout, two 1925 American cotton diapers, a cotton EarthwiseTM (Earthwise Baby Ltd.) reusable nappy with Velcro TM(Selectus) fastening, and a contemporary, disposable girl's PampersTM (Procter & Gamble) nappy.

It was necessary that the display methods chosen would show the nappies safely and effectively. They would also have to be in keeping with the general style of the galleries which had been established previously, and which, with an eye to economy, was based on mounts that could be produced cheaply in-house.  The nappies were to be displayed in a glazed wall-case and fixed to a backboard which had been prepared, sealed and covered with Conservation approved fabric in the workshop at NMC.

The Pampers and Earthwise nappies had not been used and were in good condition.  The tailclout and diapers needed only minimal conservation which included washing, some stain removal and darning.  The diapers showed evidence of much use and wear; they were grey in colour and had a number of holes.  It is interesting to note that the diapers would have been fastened with a nappy pin, but the areas of damage did not all correspond to pin holes and this damage was more likely to have been caused by repeated laundering.  It was decided that one of the diapers would be fastened with a steel nappy pin for display, so the pin was lacquered with FrigileneTM (Wm. Canning Ltd.), a cellulose nitrate based lacquer, in order to seal it and isolate it from the textile.

The tailclout would have been secured in place by swaddling bands and may have been worn by the unfortunate child for many hours as it was a complex process to unwrap the infant once it was bound up.  It was decided to display the tailclout simply, by stitching it to the backboard, folded as worn, and the fold was padded with a small polyester wadding cushion covered in cotton lawn. 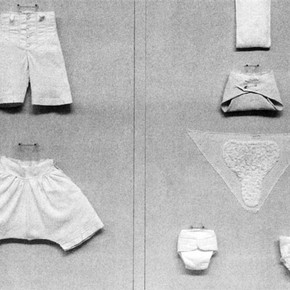 One diaper was displayed by stitching it flat onto the board in order to show the specially shaped terry-towelling absorbent panel while the other diaper and the two nappies were prepared for display on padded PerspexTM (ICI) hanging mounts.

Patterns were taken and Perspex shapes with sloping shoulders were cut from 6mm Perspex sheet.  These Perspex shapes fitted the nappies exactly when they were fastened but still allowed a little room for shaped padding.  The edges of the perspex were smoothed and two 10mm holes were drilled in the top of the shapes to allow for fitting onto perspex rods which would be fixed projecting from the backboard at a 900 angle.  A line of small holes large enough for a needle to pass through were drilled lower down the perspex shape.  These were to allow the padded section of the mount to be stitched on.  For each of the stands, the padded section was an individually styled shape cut from layers of polyester wadding to fit the nappy.  These were then covered with lawn cotton and the whole was stitched through onto the perspex mount.  Each nappy was put onto its completed mount and fastened.  Care was taken with the insertion of the nappy pin to the diaper making sure that it passed between the threads of the weave of the nappy and at no time split a thread to avoid causing further weakness.  The supported nappies on their hanging mounts were then fixed onto the rods projecting from the backboard.