Preparations for 'Carl and Karin Larsson: Creators of the Swedish Style'

'Should I die which, surprisingly enough, could happen, I believe that the home will carry on just as well, although not just in the same way.  But then it wasn't the same yesterday as today. A home is not dead but living, and like all living things must obey the laws of nature by constantly changing...'1

The first major exhibition ever held outside Sweden on the work of Carl and Karin Larsson opens at the V&A on 23 October 1997. It focuses on the famous house they created at Sundborn in Sweden and its extraordinary impact on interior design world-wide over the last century. The highlights of the exhibition include a specially commissioned wooden model of Sundborn and five room-sets containing the original furniture and fittings lent  from the Larsson home for the first time. Almost all the exhibits are from public and private collections in Sweden. The show is co-curated by Michael Snodin, Head of Designs, in the Prints, Drawings and Paintings Collection and Dr Elisabet Stavenow Hidemark of the Nordic Museum, Stockholm with the design historian, Denise Hagströmer, as the guest curator of the section on the Larssons' legacy. 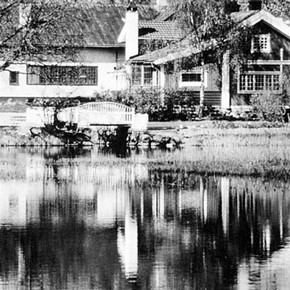 The Exhibitions Department arranged a one week trip to Sweden in December 1996 for the V&A's exhibition designer, Sharon Beard, and ourselves. A two day visit to the house at Sundborn, now a museum called Carl Larsson-gården, was included to increase our familiarity with the 150 loan objects, to establish the current condition of the objects and the environmental conditions in the house, to check aspects of the room-set designs, and to discuss the packing and transportation of the loan. The rest of the week was spent in Stockholm where meetings were arranged with the Nordic Museum, the Nationalmuseum and an art transport company.

Carl Larsson (1853-1919) is Sweden's most beloved artist. In 1889, Carl and his wife Karin (1859-1928) were given a rural cottage in the village of Sundborn (Figure 1). When the holiday cottage became the permanent home for their large family, it was enlarged and transformed. In total contrast to the prevailing style of dark heavy furnishings, its bright interiors incorporated an innovative blend of Swedish folk design and fin de siècle influences, including Japonisme and Arts and Crafts ideas from Britain. The Larssons created a style of interior decoration recognised as quintessentially Swedish with colourfully painted furniture and woven textiles. Karin designed and produced the textiles and her loom is one of the objects in the exhibition. Through Carl's watercolours of his house and family  1,2,3 the couples' ideas on interior design reached a large audience (Figure 2). 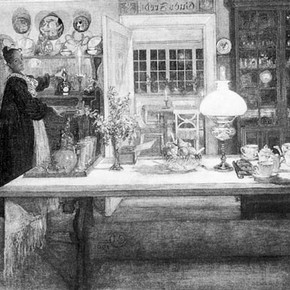 Figure 2. The Dining Room depicted in 'For a Little Card Party', Carl Larsson, 1901. Courtesy of the Nationalmuseum, Stockholm (click image for larger version)

After Carl and Karin Larsson's death their descendants formed a trust, the Larsson Family Association. It was a founding principle that the house should continue to be used and not be just a museum. Consequently, the family regularly holds celebrations at the house, enjoying and using its contents. Not surprisingly, this causes some conflict between those whose priority is the preservation of the spirit of the place and its continued use and those who are responsible for the preservation of the objects and the fabric of the building as an important part of the national heritage - with 60,000 visitors a year. Museum or home? It is a paradox; the fact that it is still lived in undoubtedly contributes to its special atmosphere and charm but it inevitably causes wear and tear. Throughout our stay at Carl Larsson-gården, we had, as museum professionals, a somewhat surreal feeling, as we sat on the chairs, slept in the beds and used the table, which we will next see carefully installed as museum objects in our exhibition.

The known vulnerability of large painted wooden objects to changes in environmental conditions, meant that the painted furniture coming from Carl Larsson-gården was the focus of concern from the Conservation Department. Problems have arisen when there has been a large difference between the environmental conditions that an object is used to, such as an unheated church, and those in the Museum. The former might have a typical relative humidity of 70%RH whereas the relative humidity in the exhibition space would be set at 50%RH 4. At our request the climate in several rooms at Carl Larsson-gården was monitored with electronic loggers5 from July 1996. Shortly after our visit, we were provided with graphs that showed considerable and quite rapid fluctuations in both temperature and relative humidity6 .There were few signs of flaking on the painted furniture, so it seems the pieces are able to withstand these sudden changes in relative humidity with minimal damage. Since it is anticipated that the conditions during the exhibition will not fluctuate as widely (between 45-55%RH and 18-22 C) the painted furniture should not be at risk from its temporary change of environment. 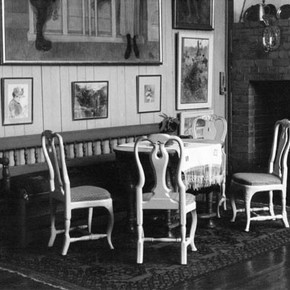 Figure 3. View of the Studio, showing furniture, tablecloth and wall sconce that will be in the exhibition. Photography by Nicola Costaras (click image for larger version)

Assisted by the curator, Marianne Nilsson and Lennart Persson, a freelance conservator who has worked on the collection for several years, we moved through the house considering each loan object from our different viewpoints: conservation, design, transport and packing (Figure 3). We checked the object dimensions, took photographs, discussed display proposals and hanging fittings. We agreed what conservation work would be carried out on the painted furniture before it travelled. Lennart's knowledge of the conservation history of many of the objects was extremely useful. We also considered the packing requirements of the various objects. The designer discussed the room-sets with Anders Eriksson from the Nordic Museum, whose Technical Production Department would build them.

Our meetings at the Nordic Museum and Nationalmuseum involved a brief look at the loan objects, agreeing who would carry out the packing and transport. The Registrar at the Nationalmuseum arranged a meeting of everyone involved with the loan including the freelance paper conservator who will condition check the loans from private lenders, representatives from the transport company and an officer from the Swedish Royal Air Force.

As part of the Swedish government's sponsorship of the exhibition, the Swedish Royal Air Force offered to fly the room-sets and objects to London and return them to Sweden at no cost to the V&A. First Lieutenant Malmgren briefed us at this meeting on the facilities and loading procedures of a TP 84 Hercules aircraft7. The Swedish Air Force has had previous experience of handling fine art shipments 8.

In addition to the Sundborn loan, the packing and transportation of all the other loans within Sweden were discussed with the fine art transport company. As well as the Nationalmuseum and the Nordic Museum in Stockholm the lenders include four major Swedish museums, nine organisations and 14 private lenders.

The visit to Sweden was felt to be extremely useful by both the Conservation and the Exhibition Departments. The Conservation Department welcomed the opportunity to build on the positive experience of similar reconnaissance for the William Morris exhibition in 1996. In the past, loan objects have often been seen for the first time by a conservator on arrival in the Museum just prior to the exhibition. Having the opportunity to examine the condition of the objects well in advance meant that any objects that needed conservation could be identified and treated in good time before transportation. Preparations could be made in advance for particular display and packing requirements. Anders Clason, the Swedish Cultural Attaché in London, worked tirelessly to raise sponsorship and persuaded six Swedish Ministries, including the Ministry of Defence, to support the exhibition. Project team members benefitted enormously from early visits to Sweden, generously financed by the Swedish Embassy. Without the visits we would not have the same appreciation of how truly cherished and important the Larssons are to all Swedes.