The Stein Loan of Textiles in the Victoria and Albert Museum

A brief glimpse into the history of Chinese Central Asia is afforded by a small display case located in the Textile Study Rooms of the Victoria and Albert Museum 1 . A view of old trading routes, now called 'The Silk Road', can be seen through part of a collection known as 'The Stein Loan' displayed in these rooms. The aim of this article is to briefly explore the history and conservation of the loan within the Museum context. 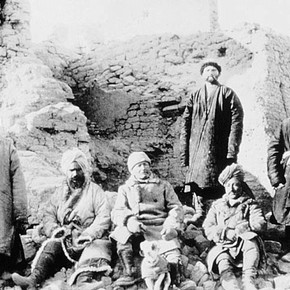 During the first two decades of this century Sir Marc Aurel Stein (Figure 1) undertook three expeditions to explore ' The Silk Road'. The road dates from at least the last few centuries before Christ and along it cultural interchange between India, Western Asia and the Far East occurred. Its heyday was during the Tang Dynasty (618-906AD) but it eventually declined in the Ming Dynasty (1368-1644AD). Stein's discoveries were described by a contemporary, Sir Leonard Woolley, as 'the most daring and adventuresome raid upon the ancient world that any archaeologist has attempted'.

The North and South routes which circumnavigated the Taklamakan Desert, could support life only in the few oases along the desert's perimeter. The inhabitants of these settlements left behind a very cosmopolitan groups of artefacts which conjure up images of thriving, bustling caravan stations. However, one should not romanticise these trade routes which often had soaring heat during the day and freezing nights. So although this area is not conducive to human life, the  arid climate actually aided the preservation of numerous textiles and organic objects.

The importance of the Stein Loan cannot be over emphasized, not only for what can be learnt from the vast array of technical excellence exhibited in the finds but also from insight into the trade and culture of 'The Silk Road'  peoples. The display in the V&A amounts to only a handful of some 700 textiles on loan to the Museum. The remainder of Stein's collections are deposited in the British Museum and the National Museum of India in New Delhi.

At the time of their excavation Stein's textiles and artefacts created a great deal of interest because of their rarity and early provenance. It was Mr Fred Andrews, Stein's assistant, who in his 1920 article in The Burlington Magazine for Connoisseurs 2 (Burlington) stated that 'the first impression of a casual examination of the specimens was the absence of general resemblance to anything in textiles with which we are familiar'.

Mr Kendrick, Keeper of Textiles at the V&A wrote to Dr Arnold, the Director of the V&A, on the 5 August 1920, enthusing about the textiles cited in the Burlington article. Kendrick  states that 'it is of the greatest importance that these stuffs should be accessible to students, in some form, at no very distant date' 3 . Kendrick was worried that unless a detailed scientific study of the textiles was undertaken, the only knowledge would be based on the drawings published by Mr Andrews, 'almost worthless for critical purposes'.

Stein's main concern however was to obtain good photographic reproductions of those textiles which were to illustrate the report he was busy writing of his Third Central Asian Expedition finally published in the book Innermost Asia 4 . He wrote from his camp in Srinagar in October 1922 to Kendrick that many of the textile remains 'needed further systematic cleaning before they can be reproduced'. He further writes that 'for their cleaning and preservation some such special chemical treatment is obviously needed as our ancient paintings on silk received at the British Museum'. Stein believed the British Museum's workrooms to have unsuitable conditions for his collections, nicknaming them 'Les Caves'; ironically one of his greatest 'finds' had been in Qianfodong (Caves of the Thousand Buddhas) near Dunhuang. In seeking alternative accommodation it was proposed that some should come to the V&A if he could succeed in obtaining permission from the Government of India.

The deposition of the textiles at the V&A was therefore seen by both parties as mutually beneficial. Kendrick proposed to provide only working accommodation for Stein and Andrews, 'possibly a corner in the Art-work Room'. However the Museum did not expect to incur any of the cost involved over cleaning materials, even though the textiles 'might be saved from inexperienced and unsuitable treatment'. 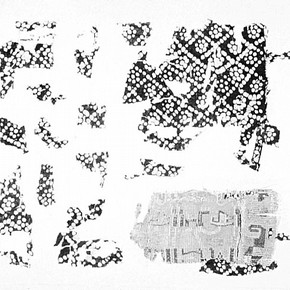 Eventually by December 1923 the V&A was loaned a group of textiles from Stein's Second expedition and finally in 1932, 34 specimens from the Third Expedition followed. All the fragments from the second loan were described as having exact copies in either the British Museum or New Delhi collections. They display fine examples of complex weaving and design details in keeping with the Museum's collections of the decorative arts. There are glazed weaves, gauze, self patterned weaves and polychrome figured weaves plus felts and leathers. The objects include shoes, balls of yarn, items of everyday use and religious paraphernalia. All types of decorative technique have been used such as, embroidery, resist and clamp resist dyeing 5  and painting.

Originally the work of restoring and mounting was entrusted by the Government of India to a Miss Joan Joshua who was based at the British Museum in the 1920s. She acted as Stein's assistant in various literary and artistic capacities in connection with Innermost Asia. The treatment used on some of the textiles  was published in Embroidery magazine 6 , which for that time was rare - scientific conservation was still very much in its infancy. 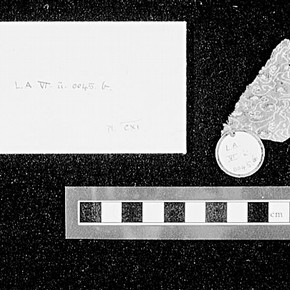 Figure 3. Polychrome patterned silk from Lou-lan Site A with the envelope it is stored in (Site number LA.VI.ii.0045.b.) (click image for larger version)

The publication is very useful when looking at these textiles. Where possible they were cleaned by soaking in water for several hours, some were reinforced with a chemical 'restorative' cellulose nitrate solution. Finally thin strips of Japanese  paper were attached to the reverse side of the textile with a flour and water paste forming a strengthening lattice. The whole  was then attached to pure linen mounting board using the same paste (Figure 2). This technique 'offered the possibility of unmounting if necessary at some future date, without damaging it, by  carefully working a sharp knife between the mount and the paper strip'. This showed unusual foresight.

Many ethical dilemmas face the conservator when approaching these textiles now. For example the historical background, not only of the textiles but of Stein's meticulous excavation procedures. After 60 years, many of the textiles not treated by Joan Joshua are still neatly wrapped in the paper parcels and envelopes as Stein left them.  Many of the handwritten labels identifying their find location are in his own handwriting. Although they are showing signs of corrosion, consideration has to be given whether to keep them in-situ (Figure 3).

Now, in the 1990s, some of the textiles attached to linen card are showing further signs of damage, directly due to the treatment they received. The cellulose nitrate has left them fairly brittle and differential tensions between textile and board have built up over time causing splitting. 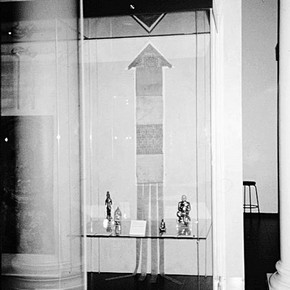 Interventive conservation has been undertaken on a handful of textiles since their arrival in the Museum; these are mainly textiles now on display (Figure 4). The remainder are now housed in the new textile store in the Far Eastern Collection Offices. A recently conducted survey to see how the loan was used and how best to limit unnecessary handling resulted in the commencement of a program of photography to record all the textiles. Students and visitors will then be able to look through the photographs prior to or instead of touching the textiles. This is somewhat reminiscent of the eager plans of those scholars in the Museum in the 1920s.

For all their rarity and academic value these textiles are not currently a high priority. This is due to limitations of  resources and other commitments which has often left it  'more celebrated than studied' 7 .

1. This article was adapted from a paper presented at the  'Ars Textrina' conference, University of Leeds in July 1995.

5. Resist dyeing involves painting or printing areas on a piece of cloth or yarn with a resist of paste or wax, the dye does not penetrate where  resist. Clamp resist dyeing involves the use of carved wooden clamps between which the fabric is sandwiched before dyeing. The dye would only penetrate certain areas of the carved clamps therefore creating a pattern.

7. Wilson, Verity, 'Early Textiles from Central Asia: Approaches to study with reference to the Stein Loan Collection in the Victoria and Albert Museum', 'Textile History', 26 (1) 1995, pp. 23-52.