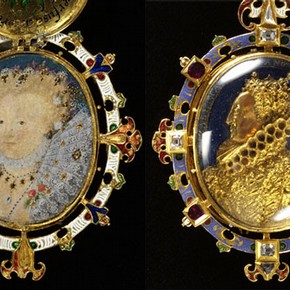 Earlier this year it was possible to arrange for the loan of a Raman  Microscope, free of charge, from Instruments(SA) Ltd. Dr. Robert Withnall was invited, from the University of Greenwich, to operate the instrument and - equally importantly - to interpret the results.

The main area of investigation (carried out over the course of two days) concerned the in-situ analysis of framed portrait miniatures. An additional half-day was spent analysing objects from other sections of the conservation department and explaining the theory of the instrument.

The use of Raman spectroscopy as a non-invasive, non-destructive method of pigment analysis is well known within the field of conservation1,2.  Its application to works of art on paper3 is particularly useful where the paint layer is usually too thin to allow pigment sampling to be ethically or technically possible.

Before the relatively recent development of portable Raman spectrometers, access to this type of analysis was difficult to arrange because of the size of the instrument and the need to realign the optics after moving it. This meant that the object had to be taken to the instrument, normally housed in some university laboratory distant from the museum collection. Alternatively analysis relied on the invasive method of taking a sample which could then be analysed at the laboratory.

This paper will look at the use of the new range of portable Raman spectrometers, which can be easily transported to and within the studio. Due to developments such as charge coupled device (CCD) detectors, air cooled lasers and holographic filters, Raman spectrometers are physically smaller - hence portable - and they allow a more rapid collection of data. The instrument used in this study was a LabRam Microprobe4.

The theory of Raman spectroscopy is described in the literature5. Professor C. V. Raman discovered the Raman effect in 1928. In the inelastic light scattering process, a single photon is scattered by a molecule and loses energy during the scattering event. The difference in energy between the original and scattered photons corresponds to a vibrational energy of the molecule of interest. The vibrational Raman spectrum acquired provides a 'fingerprint' of the molecule. Identification of the material can be made by reference to a library of spectra6.

In practice a low powered laser light is directed on to the material to be analysed. The back-scattered radiation is collected by the objective lens of the microscope and the unwanted Rayleigh scattered light is rejected by a holographic super-notch filter. The data was processed via a PC with a software package that allows analysis of the obtained spectra. The pigment particles to be analysed could be located in situ by viewing the image on a video screen using a camera attached to the microscope.  Areas with a diameter of less than 1µm can be focused on for analysis.

Analysis of portrait miniatures through the cover glass

One extremely useful function of Raman is its ability to be used through a microscope. This means that the incident beam can be focused on individual pigment particles. This is obviously a tremendous advantage when dealing with portrait miniatures where only tiny areas of colour may have been applied. Pigment mixtures can also be distinguished and analysed separately through the microscope. Another advantage, that has not been previously explored, is the possibility of focusing through the cover glass of the miniature. This means that pigment analysis can be carried out without having to take the miniature out of its locket/frame. This avoids the often difficult and time consuming  process of opening the miniature's locket.

The Heneage Jewel (Figure 1) was chosen for analysis, as it is a rare example of a portrait miniature, which is still in its original setting. The Heneage Jewel (also known as the Armada Jewel) is thought to have been given to Sir Thomas Heneage by Elizabeth I circa 1600. The miniature itself was painted, by Nicholas Hilliard (1547-1619), in 1580, according to a gold lettered inscription on the blue background. However this inscription may well have been added at a later time.

Hilliard who was originally trained as a goldsmith may have been involved in the making of the Jewel. We know much about miniature painting technique from the treatise Hilliard wrote in about 1600 entitled A Treatise Concerning the Arte of Limning7. In this document he also describes in detail the pigments that he used. It was interesting therefore to analyse the various pigments on the miniature and compare them to the ones described in Hilliard's treatise. It was also decided to analyse the cover glasses and the precious stones on the Jewel. 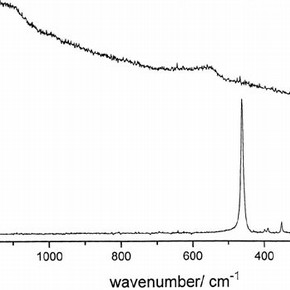 Figure 2. Raman spectra of (a) the domed cover on the front of the locket and (B) the flat cover on the reverse side (click image for larger version)

In Figure 1 can be seen the cast gold profile of Elizabeth I, glazed by a domed, transparent cover and the gemstones set into the edge of the front of the locket. The Raman spectrum of the domed cover (Figure 2) shows a very strong band at 464cm-1 and weaker bands at 207, 265, 355, 392 and 402 cm -1, which are assigned to alpha quartz i.e. rock crystal by comparison to its literature spectrum.

It had long been supposed that this domed cover was rock crystal but this is the first time, as far as is known, that definite evidence has been obtained. In contrast the flat transparent cover used to glaze the miniature exhibits weak broad bands centered on 546 and 1087 cm -1; these are assigned to an amorphous glass.

It was possible to confirm that the red gemstones are rubies, as they give a characteristic fluorescence spectrum with sharp bands at 1379 and 1409 cm -1 (when using a helium neon laser). The clear gemstones that alternate with the rubies were confirmed as diamonds, showing a very strong sharp band at 1331 cm -1.

All pigment analyses on the miniature were performed by focusing the laser radiation through the cover glass and collecting the back scattered light. Identifications were made by comparison with published spectra.

Figure 3 shows a detail of three pearls from the miniature. In his treatise Hilliard describes in detail how to paint a pearl...

'the pearls laid with white mixed with a little black, a little indigo, and a little massicot, but very little in comparison of the white, not the hundredth part. That being dry, give the light of your pearl with silver, somewhat more to the light side than the shadow side and as round and full as you can; then take a good white, delayed with massicot, and underneath at the shadow side give it a compassing stroke, which shows the reflection that a pearl hath'.8 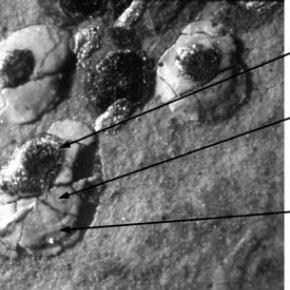 Raman analysis of the pearl revealed that the main  'blob' of white contains lead white (basic lead carbonate) but no traces of indigo or massicot were found. The crescent shaped compassing stroke at the bottom right hand edge of the pearl was found to contain - somewhat unexpectedly- orpiment (arsenic (III) sulphide) with traces of pararealgar (arsenic (II) sulphide) and not massicot (orthorhombic lead(II) oxide) as recommended in the treatise. In the sixteenth century massicot may well have indicated lead tin yellow. This was more surprising as earlier in his treatise Hilliard warns that:-

'All ill-smelling colours, all ill-tasting, as orpiment... are naught for limning; use none of them if you may choose'9

Figure 4 shows detail of the flowers and leaves, which were analysed. The flowers were found to consist of vermilion (mercury (II) sulphide) and the leaves consisted of malachite (a basic copper carbonate) and another green which so far, it has not been possible to identify.

The background blue was analysed in a number of different places and found to contain azurite (a basic copper carbonate) and lazurite (the blue part of ultramarine) and in one case a mixture of the two with lead white. These inconsistent results are probably due to retouching to the considerably damaged background. 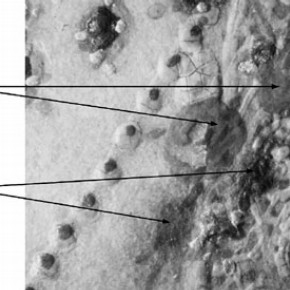 Figure 4. Detail of flowers and leaves from the miniature of Elizabeth I, Heneage Jewel. Scale: 10 x magnification. Photograph by Nick Frayling (click image for larger version)

Touches of purple decoration around the head were examined and found to consist of discrete blue particles, which gave strong Raman spectra corresponding to lazurite. However the purple itself gave no other distinct result.

Various other pigments were also analysed. Full details will be published in the 'Journal of Raman Spectroscopy' in 1999.

Analysis of other objects

Objects from other studios were also examined using Raman microscopy. A number of these objects were three-dimensional and results could have been obtained more efficiently using a microprobe attachment. This was not available to us at the time but consists of a fibre-optically connected probe that can be readily used instead of the fixed microscope, making it possible to take readings from awkwardly shaped objects.

This object currently being conserved by Annabelle Mills, in Paintings Conservation, for the British Galleries was examined in a number of different areas using Raman. This painting has been restored and has overpaint on some of the black lettering and in the sky area.

Raman microscopy indicated that the large capital letter was a mixture of vermilion and iron ochre. Another of the letters was found to contain carbon black.

This object is currently being conserved by Metaxia Ventikou in Sculpture Conservation. Most of this object is overpainted with only a few fragments of original pigment remaining. It was possible to identify both vermilion and orpiment using Raman microscopy.

The portable Raman Microscope proved to be an invaluable instrument for pigment analysis. It is a non-destructive, non-invasive method which is capable of analysing tiny areas of pigment (including individual pigment particles) that could not have been resolved using other methods. It also has the advantage of being able to identify the chemical compound rather than just the elemental composition as with XRF (X-ray fluorescence) or PIXE (external beam particle-induced X-ray emission).

The novel application tried during this project of analysing pigments through the cover glass of the miniature's locket proved very successful. Again this is a technique that could not be accomplished using other types of instrumental analysis.

Raman microscopy also proved to be a quick and efficient method of analysis for other materials such as gemstones, quartz and mica.

Pigment analysis on three-dimensional objects was also possible though would have been easier with the microprobe attachment.