Developing a collaborative approach to the conservation of lacquer

In 1999, a proposal was made for the treatment of the Mazarin chest as part of the Japanese Agency for Cultural Affairs’ (Bunkacho) Conservation of Japanese Treasures in Overseas Collections programme. The chest was to be shipped to the Tokyo National Research Institute for Cultural Properties (Tobunken) where it would be expertly treated using traditional materials and techniques. 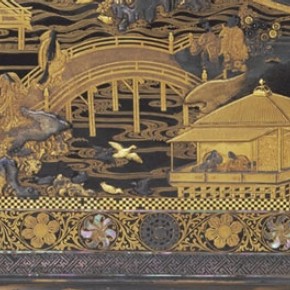 The Mazarin chest is one of the foremost examples of an oriental lacquer (urushi) object designed and made in Japan in the early seventeenth century for export to the West. Although much of the lacquer made for export was mass produced and of poor quality, a few articles of exceptional quality were produced in the 1630s. The V&A has three of these exceptional pieces, one of which is the Mazarin chest (412-1882). The chest is decorated with scenes from the Tales of Genji, a Japanese novel dating from AD 1000-1025, and also a range of other pictorial scenes.

Although the chest is in a fairly stable condition and is not actively deteriorating, many areas of decoration are loose or poorly adhered. This loose decoration is very vulnerable to damage and further loss when the chest is transported or otherwise handled. Shrinkage cracks in the lid are the result of a long history of low relative humitidy (RH) in the Museum and its stores, combined with the original cleated construction techniques. There has been some loss of lacquer decoration along the splits and the surviving lacquer in these damaged areas is at risk of further loss.

After much discussion, it was agreed that it would be preferable to treat the Mazarin chest in the UK. Firstly, there is the risk factor involved in transporting such a heavy and fragile object to and from Japan. Secondly, there are many thousands of lacquer objects in the V&A’s collections, and it seemed appropriate to develop skills within the Museum so that these could be used to benefit both the Mazarin chest in particular, and the lacquer collection as a whole.

As a broad generalisation, approaches to the conservation of lacquer in the West and in Japan are quite different. Throughout the development of conservation ethics in the West, reversibility (or more recently retreatability) has been a key concept. With this in mind, there has been a long-standing desire to use materials that do not cross-link, so that conservation treatments can be removed in the future, if necessary, without damaging original material.

In contrast to this approach, the conservation of lacquer in Japan still largely relies on the use of traditional materials. These materials are based on urushi, the material originally used to create oriental lacquer  objects, which cross-links as it dries. Freshly-cured urushi is considered by some to be a super-durable material, as it is impervious to solvents and barely affected by extremes of pH.

In early 2000, I was invited to Japan for six weeks to study the history and conservation of lacquer. My visit was sponsored by the Japan Center for International Co-operation in Conservation. I spent one month at the Tobunken observing and discussing conservation treatments and making sample boards, ten days visiting sites relevant to the history and development of Japanese lacquer and ten days participating in the conservation of lacquer objects in the studio of Kazumi Murose, a lacquer artist and restorer.

Transferring knowledge and practice back to V&A and the UK 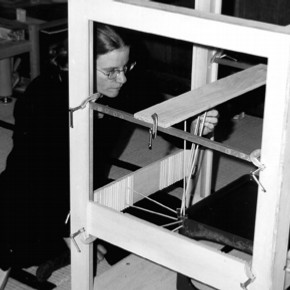 One of the key issues raised in reference to the conservation of the Mazarin chest in Japan was the need to ensure suitable storage for the Mazarin chest after a traditional conservation treatment. Traditional lacquer-based materials cure properly. An area of concern was the possible effect on the chest of the changes in RH necessitated by a traditional treatment. The chest has had a long period of acclimatisation to a comparatively low RH in London (35-45%), but would be treated traditionally and at a comparatively high RH (60-80%) before being returned to the much lower RH in London. The timing of the Sharing Museum Skills secondments was particularly fortuitous. Ticca Ogilvie had conducted extensive research into the design of humidification systems as part of her doctoral research on the moisture sorption characteristics of wooden objects. She was able to offer comprehensive advice on a humidification and monitoring system for the storage of the Mazarin chest

The V&A will be continuing a collaborative approach to the treatment of lacquer objects in our collection. We are developing research projects that will be undertaken at the V&A (with Brenda Keneghan, Polymer Scientist) and at the Tobunken (with Wataru Kawanobe, Head of the Restoration Material Science Section). Possible avenues for research include assessing cleaning treatments, comparing Japanese and Western consolidation and surface treatments, and assessing and adapting traditional fill materials.

I would like to thank Jonathan Ashley-Smith and Albert Neher for their generous and continuing support for this project; the Japan Center for International Co-operation in Conservation for sponsoring my visits; Hiroshi Kato and Yoshihiko Yamashita and their colleagues at the Tobunken and beyond for making my visits to Japan such fruitful exchanges.