During January 2002 I spent four weeks working in Kolkata (Calcutta) on a preservation project centred around this collection of paper-based materials associated with the artist and film-maker Satyajit Ray. My involvement with the project began in 1995 when I visited the Ray family home where the archive is situated and did an initial survey of the paper-based materials. On my return to England I wrote a report listing an action plan and a proposed budget for the conservation materials required. In 1995 I had only seen a small portion of the collection and so had only been able to carry out a sample survey of a small cross-section of the total number of items. Follow-up visits in 1996 and 1997 helped to formulate plans for a future project and to draw up a budget with a view to raising funds. 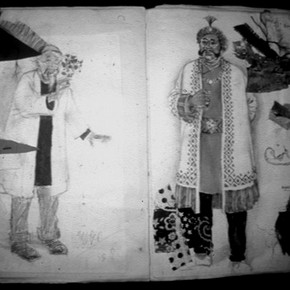 Figure 1. Page from one of the Khero Khata showing design drawings as well as textile samples pinned through pages. Photography by Mike Wheeler. (click image for larger version)

The most valuable part of this collection from the point of view of the history of cinema, and also the largest single component (totalling over 10,000 pages), is the Khero Khata or ‘Red Books’. Averaging two for every full-length feature and one for every short film, they include scripts in various stages of development including the final shooting scripts detailing each scene and shot. There are also detailed sketches, diagrams and designs.

Other ‘treasures’ include screen plays, music notation sheets, designs and sketches for costumes and sets, production stills, drafts of Ray’s own fiction, advertising and book designs, correspondence, over 1000 personal photographs, examples of his early drawings and sketches, typographic and calligraphic designs, diaries and personal scrapbooks.

The focus of the current preservation project by the Ray Society is this collection housed in the Ray family home– a large apartment in central Kolkata. The conservation part of this project was inextricably linked with a subsequent programme to digitise the material, currently underway. From the initial 1995 survey information a proposal was put together for the conservation materials required to carry out essential first aid on the archive, as well as sufficient funds to purchase storage boxes and storage furniture for the collection. Funding received from the Ford Foundation (New Delhi ) and the India Foundation for the Arts (Bangalore) in 2000 allowed the purchase of significant quantities of conservation quality materials and paid for my travel to India.

The task of preserving this archive is complicated by the fact that the collection is integral to its current location – the Study in the home where Ray lived and worked. This factor dictated that any new storage methods introduced had to fit in with the existing family furniture. The Study in which Ray worked has been left exactly as it was at the time of his death. The desire to interfere as little as possible with the original layout of the room led to the planned creation of a small storage area just off the Study, sufficient to accommodate plan chests and a system of shelves to hold Solander boxes and other conservation enclosures.

On arrival in Kolkata one of my first tasks was to look at the different areas of the collection in detail, as well as accurately measuring all of the paper-based materials with a view to making or ordering enclosures. Working within the Ray family house was a unique experience which required some period of adjustment. As well as fitting into the family’s own timetable, I also had to find a way of working within their home in somewhat makeshift circumstances in a manner that was not intrusive. The working conditions within the house were obviously very different from those under which I normally work in the V&A Paper Conservation Studio. It was quite testing at times, especially when the electricity failed in the middle of lining a poster, or when trying to reassemble a highly damaged document. Completing the work by the dim light of a low wattage bulb powered by an emergency generator was, at times, both stressful and challenging.

Initially the intention had been to buy most of the conservation materials in England and send them out in advance of my visit to await my arrival. However, I soon realised that my knowledge about the extent and condition of the Ray collection was far too limited and that I might waste precious funds on buying and importing unnecessary, expensive specialist materials. After some thought I decided on a compromise – to take a small amount of vital materials with me, but to defer the major purchases until after I had seen and measured a cross-section of everything in the archive. The costs of air-freighting equipment are high, so it was important to source as many materials as possible in India as funds were limited.

The essential conservation supplies I brought from England were looked at with interest – and in some cases bewilderment – by the Indian Customs & Excise Department on landing in Kolkata. In many instances it was possible to use materials available in India for conservation purposes without compromising standards. Papers for folders and interleaving as well as lining and repair are available from suppliers in India and Nepal. Acid-free mounting card was already being imported from the UK by a company in Chennai (Madras).

High levels of airborne dust made the use of boxes and enclosures highly desirable as a preservation measure for a wide range of the paper-based materials. A considerable amount of time was spent measuring books and photographic albums with a view to providing phase storage boxes at a later date. Some experiments have already been carried out using locally available buffered mounting card, which is considerably cheaper than the imported folding box board. The phase boxes used by the National Art Library at the V&A provided a basis for the types of boxes used for the Ray collection. 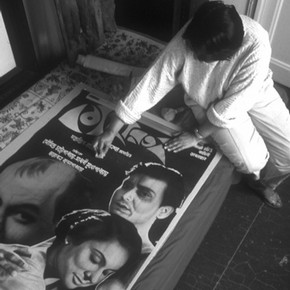 A collection of several hundred movie posters relating to Ray’s films were examined on an item-by-item basis. These had been stored rolled up in a trunk in Ray’s study in the apartment. The paper was very discoloured and fragile and many items were torn and creased. The first job was to go through the objects, unrolling them and compiling a condition survey. Progress was slow as many of the items needed surface cleaning in order to give an accurate assessment of their condition.

After some experimentation, it was decided to line all of the damaged posters with a thin, hand-made Nepalese paper using methyl cellulose adhesive. Both of these materials were available in Kolkata. Sustainability of the project was deemed to be a very important factor, so using local products wherever possible was always preferred over using imported goods. This technique was an adaptation of the lining technique currently employed at the V&A for preservation of posters.

Before beginning any conservation work, the photographs were sorted into two categories – those relating to the Ray family and images whose principal connection is with the films. Initial treatment of these  loose photographic prints, as well as helping to organise the photographs according to the films to which they relate. In this respect it was invaluable to work alongside two Bengali colleagues who had in-depth knowledge of the films. 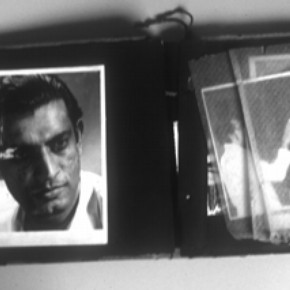 Negatives relating to each of the films were removed from acetate and glassine sleeves and re-housed in polyethylene negative enclosures which I had brought from England specifically for the purpose.

The notebooks (Khero Khata) containing the original scripts and shooting directions had been identified as being of primary importance to the collection and were targeted as a priority for conservation. These were all surface-cleaned and placed in phase boxes which I had had made in England prior to my departure. These enclosures supplemented similar boxes made in India from locally available, alkaline buffered mounting card. These notebooks have already been photographed as part of an earlier project to make the entire archive available in digital format so that researchers need not handle the originals. 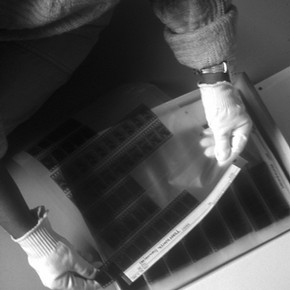 An important part of this project has been working with and helping to train two conservators in Kolkata who have been continuing the preservation work. Mr Subir Dey and Mrs Rahki Bali have been working hard to complete many of the preservation initiatives. Together we have established priorities for conservation and drawn up a work programme. Currently they have been completing work on the collection of movie posters.

Further training and visits will take place and advice will continue to be given concerning the suitability and purchase of appropriate materials through this ongoing collaborative project between the V&A Paper Conservation Section and the Ray Society in Kolkata.