The observed object: the distance between the studio and the gallery

'The observer infects the observed with his own mobility… so whatever the object, our thirst for possession is by definition, insatiable.' 1

Samuel Beckett’s study of Marcel Proust here describes a very different kind of object from those found in a museum. Nevertheless, it offers a good starting point and a stimulation for thinking about how we perceive the object and what its interpretation might involve. As such, it is directly relevant to us working in the conservation field. The 'thirst for possession' which Beckett refers to in relation to the object, I regard as not so much the physical sense of having and holding onto, but rather as understanding. That is how I want to discuss it here. It is in this way of 'possessing' an object that I see conservation as having a major role; one which comes before anything else.

This particular role that conservation has to play is always in need of being defined and redefined, exactly because there is an infinite possibility in the relationship of the observer and the observed object. That, of course, might mean that the observer then would also have to be understood. But the observer is never static. He or she moves both in time and in place. This mobility is an aspect which, sadly, is usually discussed in a historical  context within the conservation profession. Conservators very often and for a variety of reasons, have to remove old interventions from objects. This has led to an assumption that old restorations are relics of a past profession not comparable to today’s practice. While at the same time, and it would seem at this point only natural, decisions to alter past interventions represent a declaration of present achievements.

Seemingly liberated from a past where decisions directly reflected the prevailing aesthetics, old interventions would be described as 'being revealing about the sensibilities of the time rather than the artist’s intent'  2  for example. Here, quite arbitrarily, is an apparent presumption that the importance of artistic intent in today’s western society is something different to the sensibilities of the times. What is it then, if not a reflection of the way we place value on objects? Of where we stand, in the here and now when the object’s significance is assessed? From this perspective the context within which we, as conservators, evaluate our own work would then automatically create a certain space for any type of mobility of the conservator-observer and the variety of cultural influences on the approach to preserving the object firmly set in the past.

And so, despite the importance of cultural influences, or perhaps because of their complexity, in the way the object is read by the conservators in the various fields, this still remains the most elusive of things to investigate: the impact the mobility of the observer has on the observed object. It is almost like a secret garden, which although concealed, you know is there, but there is no map to follow in order to get to it. In museum studies, for example, a lot of research and literature has been developed over the last few years, on the role of the museum audience, actual and potential, and the audience’s ever-changing impact on the understanding of the object. The conservation profession has been happy to disregard its own mobility.

Instead, since the early days, the profession developed according to what was, at the beginning of the twentieth century, the modern life and corresponded to the idea of natural science. Typically modern life then was described by Georg Simmel in his theory of fashion as 'the calculative exactness of practical life which had brought a transformation of the world into an arithmetic problem, fixing every part of it by mathematical formulas' 3 . It was the reduction of qualitative values to quantitative ones and this was a line that conservation followed as it moved towards becoming a discipline in its own right.

But this becoming did not happen in a smooth and linear continuum, in the way we find it often described in conservation literature. Rather, because of the embodied memories of a vulnerable past, and choices placing conservation in an ambiguous present, the conservator has emerged as the professional advocate for the rights of the object and its well being in the face of physical change. In an effort to regain some of the lost sense of security found predominantly in technical fields, conservators are taking a 'scientific stance with an associated ethic of impartial detachment from issues of taste and discrimination.' 4

A never-ending and exhausting striving for the objective approach to conservation, whether this involves treating the object or controlling its direct environment, is at work. A tradition has been created in the conservation field of focusing on the behaviour of materials, mechanisms, possible interventions and long-term efficacy of treatment, physical condition and causes of deterioration. With the distinct idea that ethics are unrelated to aesthetics, conservation has largely favoured a deterministic approach of cause and effect.

In the search for this impartial detachment, conservators profess a non-involvement and a non-subjective approach for the benefit of a greater truth, one which lives inherently within the object. One that is always there, fixed in the material of the object, ready in its totality to project towards the future. However, truth, said Kierkegaard, is subjectivity. And the mobility of the observer implies subjectivity. As Jonathan Ashley-Smith observed: 'it is we the human beings that have the needs, the desires and rights not the objects. It is we who create the values.' 5 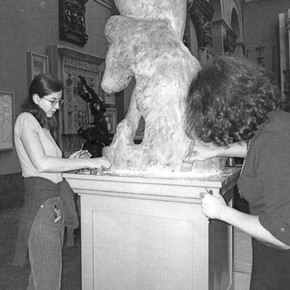 As the observer is mobile, so the object observed cannot be a static embodiment of a culture with a fixed meaning. And in this sense its preservation is a complex and continual process that recreates its product. Mobility and change are inevitable, and are bound together as the observer and the observed are. And while 'conservation is not really a bridge between science and art anymore than bakery is' 6 , I believe it to be part of what we call the human science and it is worth regarding it as such.

Popular culture, fashion, trends and values cannot then be seen as something irrelevant to conservation and the context within which it operates. A simple source or a single interpretation of the object is a misguided one and further research in the way conservation decisions influence the understanding of objects and the dynamics that influence those decisions, are avenues that need exploring within the conservation field and by conservators.

I am grateful to Professor Sandra Kemp, Jonathan Miles and Yve Lomax from the RCA and to Helen Jones and Metaxia Ventikou from the Conservation Department of the V&A.

4 Drysdale, L., The Eternal Triangle: Relationships Between Conservators, Their Clients, And Objects in Preprints for the UKIC 30th Anniversary Conference, 1958-1988, UKIC, London, p 19.