This article outlines research of ‘corrosiveness tests’ as carried out at the Victoria and Albert Museum to test materials for possible interactions with museum artefacts. The majority of the practical work was undertaken by Nobuko Shibayama, as part of her Fellowship whilst at the V&A in 1996.

Simple corrosiveness tests are accelerated ageing tests of the type widely described in corrosion literature since the mid 1960’s 1 and now refined in British Standard BS903 (1987)2. They are commonly known as ‘Oddy Tests’ as they were introduced into museums by Andrew Oddy in the 1970’s3 . Samples of test material are placed in a sealed environment at elevated temperature and humidity together with metal test coupons as indicators. Possible hazards are then indicated by the severity of corrosion on the test coupons. The tests used at the V&A are based on the test as described by Oddy. Each material being tested is placed in three separate reaction vessels containing a silver, copper, and lead coupon, respectively, maintained at 100 % rh. The vessels are placed in an oven at 60°C and the metal coupons are inspected for signs of corrosion at weekly intervals over the course of 28 days. At the end of this period, they are removed from the reaction vessels and the severity of corrosion on the coupons is categorised.

Although the test has several advantages (see Table 1), there are also significant problems. A British Museum survey comparing ‘Oddy testing’ in   number of different conservation laboratories showed that there was significant variation in the appearance of metal coupons after the test and, even when this variation is excluded, there was also significant variation in the interpretation of the result4. The study concluded that tighter specifications of the protocol, with particular emphasis on pre-treatment, positioning, and purity of the coupons and ways of sealing the test vessel, increases the consistency of the data. However, the interpretation of the results still remains very subjective and the most difficult part of the test. Also, many institutions evaluate the results for each type of coupon separately, and relate them to specific museum objects. However, the coupons are of pure elements, unlike most museum artefacts, and were chosen because they will reveal the presence of a variety of damaging vapours by corroding. Interpreting the corrosion occurring on, say, a pure silver coupon in terms of risks to actual silver artefacts is not entirely straightforward. This difficulty becomes even more serious when considering the implication of test results for nonmetallic artefacts.

In this study, reference materials were sought which would allow the test to be quantified as a first step to improving consistency. The materials need to contain reactants representative of those causing deleterious interactions with artefacts, but must also have precisely determined and consistent compositions. Wood-based products were rejected because, although they are known to emit a whole cocktail of corrosive gases, they do not have precisely defined properties and are significantly affected by seasoning and other treatments. As natural materials are unlikely to fulfil the criteria of having precise and consistent compositions, certified materials from commercial sources were examined. Cellulose diacetate (general laboratory grade with 39.8% acetyl content, from Aldrich Chemical Company) and harbour marine sediment (certified reference material PACS-1 supplied by Laboratory of the Government Chemist) were finally chosen. Cellulose diacetate produces acetic acid on hydrolysis and this reacts particularly with the lead and copper coupons. The harbour marine sediment was chosen as it contains sulphur and chlorine that react mainly with silver and copper. Actual corrosion products on the coupons were identified using X-ray diffraction (XRD). The results are summarized in Table 2. 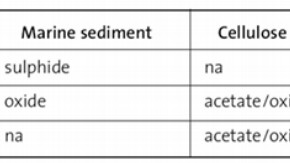 Tests were carried out using these standard materials to examine whether a threshold could be set for the amount of material causing significant interaction with the coupons in the reaction vessels. All tests were run in duplicate to assure reproducibility without extending the resource commitments unacceptably. The experiments showed that 5 mg or more of harbour marine sediment caused unacceptable corrosion of the copper and silver coupons while 0.5 mg or less gave no interaction. The threshold for the marine harbour sediment therefore lies between 5 mg and 0.5 mg.

Both of the materials chosen as standards are corrosive and very small quantities of these materials cause coupon failure. It is difficult to set a more precise threshold than those quoted above as the reproducibility of the tests seems to reduce as the amount of material is reduced. The reproducibility seems poor for quantities less than 1 mg. This is no doubt due partially to the difficulty in weighing out such small masses reproducibly; less reactive materials might form better standards. One possibility would be to dilute the reference materials with known proportions of suitably inert fillers, therefore increasing the threshold masses accordingly.

The use of a coupon to represent non-metallic artefacts was also investigated. A high purity acellulose paper was chosen as the coupon material. Deterioration of the cellulose by oxidation or hydrolysis should increase the proportion of carboxylic and aldehydic groups in the sample. As the oxidisation increases, diffuse absorption bands in the low energy (900 cm-1–1400 cm-1) regions of the infra-red spectrum also appear. Both of these changes should, in theory, be detectable by infrared spectroscopy. To test the usefulness of cellulosic coupons, they were exposed to 500 mg of each of cellulose diacetate and harbour marine sediment (significantly more than the determined ‘thresholds’ for metal coupons). Infra red spectra of the paper coupons aged in the presence of either material had increased absorbance for the bands in the 3310 cm-1 and 1100 cm-1 regions. The increase in absorbance at 3310 cm-1 is consistent with the addition of extra hydroxy groups as the cellulose chain is cleaved, though reduction of absorbance in this region is often reported in the literature for aged cellulose. The absorbance peak at 1110 cm-1 is attributed to glucoside linkages and could be indicative of cleavage of the cellulose chains. However, although the ageing conditions were quite severe, the resultant spectral changes were only small, and further work in this area would be needed.

Coupons were also examined by UV-Vis-NIR spectroscopy but no systematic changes on exposure to corrosive materials were detected. A final part of the current study was briefly to examine the effect of the volume of the test vessel. Although differences were noted (with coupons in smaller test vessels apparently having a greater sensitivity to corrosion, as might be expected) the results are by no means conclusive.

Simple corrosiveness tests are valuable in museums for quick evaluation of possible deleterious interactions of materials with artefacts. However these tests, which have become so ubiquitous in museums, have a major drawback in that they appear very simple to perform but their interpretation to real environments and real artefacts is far from straightforward. The apparent simplicity of the tests is also, no doubt, responsible for much of the misuse of results from such tests (such as using the coupons individually as models for artefacts). Further, small discrepancies in methodology have a significant effect on the results of the test, leading to poor reproducibility. Luckily,most inadvertent mistakes (such as using contaminated reaction vessels) are likely to worsen a material’s apparent performance. It might be hoped, therefore, that the results from these types of tests would err on the side of caution, although there are several possible mechanisms for apparently reducing any signs of corrosion on the coupons (such as not cleaning/degreasing the metal coupons sufficiently or failing to maintain the humidity in the vessels).

Standard materials are essential if the variability of tests is to be evaluated and separated from variability due to, for instance, variations in the actual composition of a test material. The standard materials chosen here are a very useful starting point. The precision with which the threshold for the onset of unacceptable corrosion on the coupons was determined might be improved with further experiments and by using less aggressive standard materials, although it is a common feature of corrosion experiments that results show greater variability as the quantities of reactive species are reduced. (In fact, it might be interesting to establish regions where the reproducibility reduces below a given point and use this to determine the threshold for onset of unacceptable interactions.) The thresholds allow calculation of the concentration of (particular) pollutants that cause unacceptable corrosion to the coupons in the test environment in the time over which the tests are run. This, in turn, helps to determine the extent to which the data can be extrapolated back to realistic environmental conditions.

Further work is needed to assess possible non metallic coupons. Although infrared spectra of paper coupons showed absorbance increases in the 3310 cm-1 and 1100 cm-1 regions the changes were not sufficiently obvious even for the very exaggerated amounts of corrosive materials used.

This work would not have progressed without the support and encouragement of other members of the Conservation Research Team. In particular, the contribution of David Ford is acknowledged.

2 BS 903:A37:1987, Methods of testing vulcanized rubber; part A37; determination of adhesion to and corrosion of metals, The British Standard Institute, London.