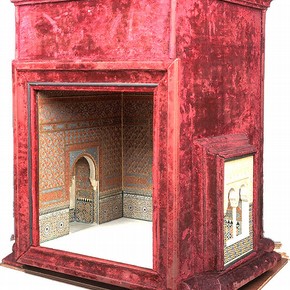 Figure 1: Model of Portion of the Tower of the Captive, Alhambra, Granada, Spain

The architectural model, signed by Enrique Linares, of the Tower of the Captive in the Alhambra's palace, Granada, will be one of the many curious objects selected for the Architectural Gallery (figure 1). This model aims to reproduce one of the great achievements of Hispano-Muslin architecture.

The model of the tower, built in the 14th century in Southern Spain, was made about 1880 with velvet, wood, paper, painted plaster and marble.

The variety and fragility of the materials, the weight (99kg) and the size (95x92x63.5cm) makes this object a complex one in conservation terms. As a result of this complexity, the conservation treatment varied in nature and degree of difficulty. Overcoming the handling of this object in order to sort out structural problems was a major concern. Consolidating the structure was also a challenge.

The model is made of painted plaster and consists of three walls and a ceiling. A wooden case, covered with red velvet, houses the model. Torn paper has been placed in between the wooden case and the plaster model to secure the plaster within its case and also to absorb any potential impact. This case resembles, in shape and colour, the original tower with plain walls of a reddish colour. The red colour of the velvet enhances the polychromy, which decorate the walls and ceiling of the interior. The painting on the plaster aims to represent painted tiles just above floor level, painted and gilded stucco panels above the tiles and the wood ceiling and door. The floor, the columns dividing the windows and the windowsills are made of white marble. Like a painting, a frame surrounds a big opening that is in place of the fourth wall, inviting the viewer to look inside. The two lateral windows offer different views on the interior.

The velvet, which covers the wooden case that houses the model is unfortunately in a very poor condition. Textile conservators of the V&A were consulted for advice that stated that the conservation of the velvet is practically impossible. Even the use of Parylene 1 as a consolidant was ruled out. The method of application of Parylene takes place in vacuum and creates a thin (less than 1µm), even and transparent film. It has been used to rescue very fragile objects such as leaves! To ensure a successful consolidation, removing the velvet from the case would have been ideal but was an operation presenting high risks. Consolidating the velvet in situ brought other problems for the rest of the object. Further this co-polymer is renowned for having bad ageing properties and reversing the treatment is impossible 2 . The velvet, therefore, was not consolidated and was only lightly vacuumed using a very soft natural hairbrush.

Before any further decisions are made this non-intervention will require regular assessments in order to monitor the rate of degradation once it is on display.

Three steps were established to address the object's structural problems whilst minimising contact with the badly damaged surface. The first step was simple but effective: a plywood board, longer than the base of the model and with handles at each end, was cut so the object could be moved and transported according to the need without touching the velvet.

The second consisted of building an 'L' structure in plywood padded with two lengths of Plastazote®, one at the top and one at the bottom edge of the back of the model. This enabled the model to be tilted on its back so that work could be carried out on the base of the model, where three of the feet were detached or loose. This way, handlers did not touch the model and instead, only two points of the velvet were in contact with Plastazote® covered with acid-free tissue. 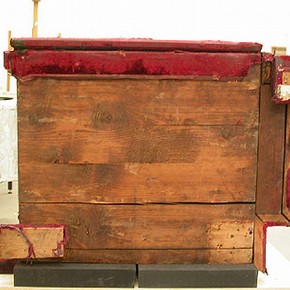 Figure 2: Bottom of model showing structural problems. The feet on which the case stands are missing

Finally, a template, provisionally made of plywood, was sprayed three times with a polyurethane coating (Selabond RJ119) and left to cure for two weeks. It was to go underneath the model and in between the feet that are at the base (figure 2). The board was a few millimetres thicker than the height of the feet. It took the weight off the four feet that even after treatment were still considered to be too weak to carry the whole weight of the object. A permanent structure was to be made of sprayed metal and an acrylic sheet.

Some precautions were taken prior to tilting the object to stabilise the base. X-ray radiographs (figure 3) showed nails and screws of different sizes and shape in the wood indicating that the wooden structure had many times been repaired. In order to ensure that the plaster model would be able to sustain its own weight in a horizontal position, balls of acid-free paper were closely packed to fill the inside space of the model.

Having overcome the problem of handling the model, the next difficulty was the fixing of the loose wooden velvet-covered mouldings to the main body of the case. The mouldings were originally fixed to the main body with nails passing through both the velvet and the wood. The nail heads were cut off to be less obtrusive and no glue had been used. Most of the nails protruding from the loose mouldings were removed, but some were simply pushed back in their original hole. Stainless steel brads were also used on existing holes. Wooden dowels and High Tack Fish Glue were used where wood was in contact with wood. 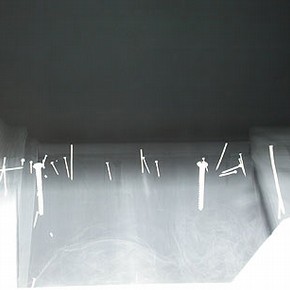 In some cases two loose pieces of moulding were fixed together from the inner angle with an 'L' shape metal plate before being fixed back to the main body. The metal plates are made of mild steel (previously coated twice with Paraloid B72 in acetone). A piece of spun bonded polyester fabric was fixed with rabbit skin glue onto the metal plate and the visible wood to avoid the metal scratching the velvet covering the case. As the space between the two sections of moulding was tight it was possible to place the mouldings in position using a light pressure. Acid-free tissue was used to fill voids that could potentially cause further structural problems, following the principle of torn paper mentioned before.

Several strategies were formulated in order to maintain the present condition of the velvet, i.e. avoid handling the object while solving urgent problems such as the structure of the wooden case supporting the velvet without conserving it. Both being in direct contact made the challenge even greater. The poor condition of the velvet is one of the reasons why the model won't be seen in its entirety when exhibited. Nevertheless, this article provides an opportunity to analyse the integrity of this object as a whole.

I am grateful to Tim Miller, Frances Hartog, Marion Kite and Boris Pretzel from the V&A Conservation Department, Tanishka Kachru from the Word & Image Department and the handlers from Technical Services for their contribution towards this project.