The Ardabil Carpet - a new perspective

The Ardabil carpet will form the centre piece of the new Jameel Gallery of Islamic Art at the V&A  which opens in July 2006. This most famous of Persian carpets has been the subject of endless copies ranging in size from small rugs to full scale carpets. There is an 'Ardabil' at 10 Downing Street and even Hitler had an 'Ardabil' in his office in Berlin. 1 The real Ardabil was first seen in London in 1892 when it was exhibited in a dealers showroom in Wigmore Street. William Morris described it as 'a remarkable work of art . . the design is of singular perfection . . its size and splendour as a piece of workmanship do full justice to the beauty and intellectual qualities of the design'. It was Morris, in his capacity as one of the V&A's Art Referees, who persuaded the Museum to raise, with the aid of public subscription, the then vast sum of £2000 to purchase the carpet in March 1893.

The Ardabil carpet measures 10.51m x 5.34m (34' 6" x 17' 6") and is thought to be one of the largest carpets in the world. Unknown to the Museum at the time, there was a second Ardabil, more finely knotted, which is now in the Los Angeles County Museum of Art. This carpet has lost its borders and part of its central field; a portion of the missing areas are thought to have been used to  repair the carpet owned by the V&A. 2 Occasionally fragments originally taken from the Los Angeles carpet have appeared on the open market. The two carpets were almost certainly a royal commission and would have taken about four years to weave. Their origins remain unclear but they are said to have come from a complex of shrines and mosques at Ardabil in North West Persia, burial place of  Shaikh Safi al-Din, ancestor of Shah Ismail, founder of the Safavid dynasty. At one end of the Ardabil carpet, a cartouche contains an inscription which dates it to 1539/40 AD. The large central medallion is characteristic of carpets woven in Tabriz (North West Persia) and the fantastic design of the ground of the carpet consisting of two layers of swirling leaves, stems and flowers is typical of the art of the early Safavid dynasty.

After its acquisition the Ardabil carpet was given a linen support and repairs were carried out in silk thread.  It was attached to a 3 fold frame and placed behind glass in Gallery 42 where it remained on display until 1974, when it became obvious that the repairs were failing and that the carpet needed further support. Furthermore it was very dirty and lacked the clarity of its sister carpet in Los Angeles which had been wet cleaned. The Museum had no facility to clean an object of this dimension and it was taken to Birmingham where it was washed outside on a specially constructed ramp using local water which comes directly from the Welsh mountains and is low in mineral and chlorine content.  After its support and repair it was attached to a secondary support of  Terylene sheeting which was lashed to a new 12 section metal frame using pre-shrunk Terylene ropes around all 4 sides. A series of ties connected the carpet and the sheeting to the frame at regular intervals. 3

The work carried out on the Ardabil in 1974 ensured its safe display for 30 years. However, the real beauty of the Ardabil carpet has never been seen in the Museum. The glazing which protected it had a slightly green tinge and obscured the vibrancy and harmony of its ten colours and the brilliance of its design. The carpet was designed to be seen flat; the difference in size between the two lamp motifs is deliberate and counteracts the foreshortening of the design along its length. This was achieved at a time when the use of perspective in Safavid art was uncommon. Low cushions would have been placed on the end of the carpet where the weaving began; thus the carpet would have been viewed against the pile, making the colours appear even more luminous. 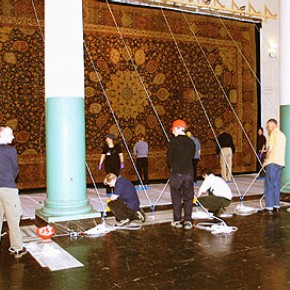 The Jameel Gallery will allow the Ardabil to be seen horizontally for the first time since 1892. The carpet was de-installed in June 2004 and was the last object to be taken out of Gallery 42 to clear the space for its refurbishment. The whole operation was filmed just as its installation had been filmed 30 years earlier. Preparatory work in the first half of June released the ties which secured the carpet and its Terylene support to the multiple section frame. On de-installation day, the frame carrying the carpet was pulled out on its runners to the east side of the Gallery. Eight pulleys had been attached to the high framework supporting the runners.  The lacing which held the Terylene support to the top of the frame was undone and the carpet and its support were gradually transferred with new lacing to a two part baton made of wood faced with aluminium. Eight ropes were threaded through the pulleys, attached to the top of the baton and tensioned on eight anchor points on the Gallery floor. The remaining lacing on the sides and bottom of the Terylene was undone so that the carpet and support were then totally suspended from the baton (Figure 1). Slowly and gently this huge and very fragile object was gently lowered by a team of technicians under the expert and appropriate guidance of Marion Kite (Marion had been involved in the installation of the carpet 30 years earlier) (Figure2). The carpet was moved safely to a larger central space in the Gallery on a large polyester floor cloth, made specially for the de-installation by a sail maker. The stitching which attached the carpet to its Terylene support was released and the carpet was rolled and taken to the Textile Conservation studio.

The Ardabil carpet will be one the star objects of the Jameel Gallery. It will be displayed flat under a suspended canopy. Its central position in the new Gallery will ensure that it can be viewed from all sides. The canopy forms the top of the case which will enclose the Ardabil and will thus protect the carpet from general gallery lighting. Glazing will be of low-iron glass with an anti-reflective coating applied to both sides. Adjustable fibre optic lighting will illuminate the carpet but extensive testing is necessary to determine the level of lighting. 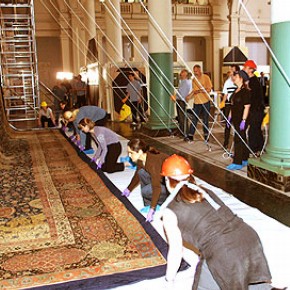 Given the size of the carpet, its prominence in the new Gallery, and its importance to the collection, it will not be possible to rotate this artefact or take it off display after a few years. It is therefore essential that the Museum is aware of the long term consequences for the carpet of continued illumination and the likely benefits that might be gained by different lighting proposals. The response of four of the ten colours present in the carpet will be established using the equipment originally designed to determine the response of William Morris's Bullerswood carpet, presently on display in the British Galleries. 4 The equipment consists of a dual beam UV-visible-near infrared spectrometer coupled to an external integrating head using optical fibres. The external integrating head is used both to concentrate intense illumination (from a Schott microscope illuminator fitted with a tungsten halogen lamp) on to selected areas of the carpet and, periodically, to measure the reflectance spectrum of the area under consideration to determine colour changes as a function of exposure. The equipment was designed specifically to allow the response to illumination at levels likely to be encountered in the museum to be determined from the exposure trials with a high degree of precision, thereby allowing extrapolation of data well beyond the exposures actually used in the experiments. Although the process does induce some limited damage to the selected areas (as they are exposed to up to 8 mlx.h of illumination), judicial choice of measurement areas (in the present instance, on the back of the carpet) limits the damage to the artefact. Measuring the response of actual areas on the carpet guarantees that the results are applicable to it in its current condition.

The experiments will take place over the course of the next three months and will feed directly in to the decisions on how best to illuminate the carpet. As it will not be possible to take the carpet off display once the Gallery has opened, it is also the intention to provide means to blackout the carpet in its new display case, allowing the illumination to be restricted if this should become necessary.

I am grateful to Jennifer Wearden for advice and information