Lustre is one of the most important decorative techniques of Medieval and Renaissance pottery in the Mediterranean basin. It is manufactured by depositing a metal on a tin-opacified lead glaze, producing brilliant metallic reflections of different colour and iridescence (see cover image).1

Historically, lustre was first used during the 9th century AD to decorate pottery in Mesopotamia,
and it spread throughout the Mediterranean basin together with the diffusion of Islamic culture(10th-14th centuries. Lustre decorations reached new heights between the 15th and the 16th centuries in Italy with manufacturing based in Deruta and Gubbio, where lustre was used to decorate the finest polychrome pottery of the Italian Renaissance. Many examples of lustre pottery from Deruta and Gubbio are now housed at the V&A in London.

In order to investigate and better understand the manufacturing technology, the V&A collaborated with the University of Perugia under the European-funded MOLAB access programme within EU-Artech.2 The uniqueness of this programme lies in the fact that the scientific instrumentation to be used in the study travelled with the operators to the V&A. In March 2005 the MOLAB research team from Perugia visited the V&A (Figure 1) with their mobile analytical equipment in order to characterise a selected number of lustre dishes signed by the renowned Italian Renaissance potter Mastro Giorgio Andreoli that were held in the collection at the V&A. The MOLAB (MObile LABoratory) consists of portable, non-destructive, non-intrusive, scientific equipment that travels across Europe, allowing scientists and conservators to carry out in-situ measurements directly in a museum, a conservation studio or an archaeological site, thus avoiding all the risks and costs associated with the transportation of valuable works of art to a laboratory. The data collected are still being analysed, and are expected to allow us to correlate composition, structure and colour of the lustre on the plates that were examined. 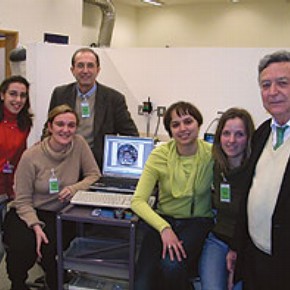 The origin of the lustre decoration technique is one of the most complex and at the same time fascinating issues in the history of ceramics. Lustre preparation is described by Cipriano Piccolpasso in the second book of 'Li tre libri dell'arte del vasaio' 3: a mixture of silver, copper and iron salts or oxides, together with red ochre and vinegar, was applied onto the surface of the glaze, the kiln's temperature was raised to approximately 600°C, and smoking organic substances were added to create a reducing atmosphere in the kiln. Surprisingly, recent works4 demonstrated that lustre consists of a heterogeneous metal-glass composite film, some hundreds of nanometres5 thick, analogous to that present in the modern metal-glass nanostructured composites synthesized for high technology applications. In lustre, separate silver and copper nanoparticles appear dispersed within the outer layers of the glaze.

The dimensions and density of the nanoparticles can be locally homogeneous. However, going across the glaze layer towards the ceramic support, the dimensions of the nanoparticles decrease from tens of nanometres to a few nanometres. Although the mechanism leading to nanocluster formation in a glassy matrix is still debated, it is reasonable to assume that the first step of lustre formation consists of silver and copper ions penetrating into the glaze. This occurs through an ion exchange between the alkali ions present in the glaze and silver and copper ions present in the mixture of the lustre recipe. However, an extended study on the original lustre wares executed by the ancient masters has not been attempted to date. All the studies carried out so far have been done on a few small fragments, which cannot be considered as representative of a larger number of cases. The collaboration between the V&A and the University of Perugia represents the first step within a campaign of measurements to be carried out on a large number of original (and in some cases signed) wares, in order to compare data among a large number of cases of great historical and artistic relevance.

Three techniques were used during this project, energy dispersive X-ray fluorescence (EDXRF), Raman spectroscopy and visible and near-infrared spectroscopy (VIS-NIR). The use of a portable EDXRF spectrometer allowed the detection of the presence of copper and silver, which can be related to the colour of the decoration. Portable fibre-optic VIS-NIR spectroscopy equipment allowed the quantification of colour and, at the same time, the qualitative detection of copper and silver nanoparticles. This identification was carried out by measuring the surface plasmon resonances typical of nanoparticles dispersed in a transparent medium. Finally, the glassy network of the glaze was studied by portable micro-Raman spectroscopy. Raman spectra from many different areas of the lustre decoration were recorded, making it possible to compare spectra taken from different decorations of the same dish or analogous decorations in different dishes.