The new Miniatures Gallery at the V&A opened to the public at the beginning of March 2005. This gallery tells the story of the portrait miniature in Britain from its first appearance at the court of Henry VIII in the 1520s to its decline with the emergence of photography in the 19th century. The new Miniatures Gallery continues on from the newly established paintings and watercolour galleries. The final stage in this suite of new galleries will be the new Jewellery Gallery due to open in 2008.

Conservation's input to the gallery began in 2003, when the plan to move the miniatures from the Henry Cole Wing into the main body of the Museum was first suggested. A survey of the miniatures currently on display at the time - and from which the final selection would be made - was carried out. It was decided that most of the miniatures would benefit from some cleaning and that some 20% needed more intervention because of problems of flaking paint, warping ivory, glass disease etc. It was estimated that, on average, object related work (assessment, condition reporting, photography, treatment and installation) would take some six hours per object.

A project team was formed, which included representatives from Collections, Conservation, Learning & Interpretation, Visitor Services, Design and Projects & Estate. The first meeting was held in January 2004.

The cases, manufactured by Goppion of Italy, incorporate a pyramid-shaped glass top that allows an unhindered view of the miniatures. The support board for the miniatures is at the same angle as the sloping front of the glass case - again for ease of viewing. The cases are opened by mechanically lifting the glass top using a hand-operated or electric drill. In hindsight this is not ideal as it involves using the drill while lying in a prone position underneath the case.

Portrait miniatures are painted in relatively thin layers of watercolour on vellum or on ivory. Consequently miniatures are particularly sensitive to light. From the outset Conservation was insistent on being able to control the total light exposure in order to limit fading and thereby preserve the miniatures for future generations. A similar protocol had been advanced and put into practice in the British Galleries. For the new Miniatures Gallery it was decided to use infra red sensors to operate the lighting only when the miniatures are being viewed. As space is limited in the gallery and the cases are close together, this was not easy to achieve. The sensors had to be customised to limit their peripheral sensitivity. When individual cases are approached by the visitor the lights slowly increase from a default level of 10 lux to a maximum level of 50 lux. After approximately four minutes the lights gradually dim back down to 10 lux. In addition there is down lighting around the edges of the gallery. This illuminates the walls  without affecting the objects and 'welcomes' the visitor into the space. In the old Miniatures Gallery, once inside, visitors had to press a button to illuminate an individual case but the gallery itself was poorly lit and not particularly inviting. 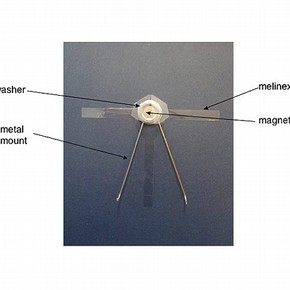 The new visitor operated lighting is intended to achieve approximately 20% exposure. For a ten hour opening day this would equate to two hours per day in total. To monitor the actual exposure it is envisaged that radio telemetry voltage sensors will be placed in perhaps two of the cases which will be able to convert when the lights are switched on to a measure of cumulative exposure. At the time of writing these devices are still at the development stage. Magnifying glasses are also provided for the visitor to further enhance their experience.

It was also decided to use a magnetic system for displaying the miniatures in the cases. The magnets used are made from neodymium and are described by the manufacturers as 'permanent' - they are guaranteed for 20 years. These magnets are available in many different shapes and sizes and from various suppliers. There are definite advantages to using magnets for display. Aesthetically it allows the use of a metal backboard with clean, sharp edges, which would be more difficult to achieve with a textile-covered support. Also by using magnets there is no need to pin into the backboard, a practice which can often leave unsightly holes if a mistake is made or if a change of display is required. The most significant efficiency with the magnets however was highlighted during installation, which went very quickly. Previous experience with the pinning method had proved to be extremely time consuming. It is also difficult to position the miniatures using pins as the curator may wish to try various options before settling on a final location. The magnetic system has no constraints and allows maximum flexibility. The miniatures can be slid around until a satisfactory arrangement is decided upon. The magnetic system is shown in detail in Figure 1. 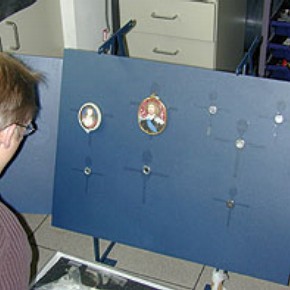 Each miniature sits on a metal mount made of wire and coated at the ends in Paraloid B72 (ethyl methacrylate methyl acrylate copolymer). The metal mount hooks over a magnet and washer. The Melinex® sheet (polyester film) serves a dual purpose. It sits between the magnet and the backboard with four arms coming off it. These arms can be used to pull the magnet into the right position. This is necessary since the magnets are very strong and not easy to move without the smooth Melinex layer. Secondly the Melinex is folded over to sit between the magnet/washer and the back of the miniature. This ensures that there is no contact between object and system that could lead to adverse chemical reactions. The Melinex shapes were pre-cut and pre-creased using the mount-cutting machine. A further safety option was to tie a thin piece of thread between the miniature locket and the washer. This ensured that if the miniature was knocked during installation it could not fall more than a few centimetres.

A study day was held on 21 May 2005 to further advertise the gallery. This included several lectures about the history, materials and techniques and conservation of portrait miniatures. Over 170 people attended the study day which, from the very positive feedback, was a definite success.