Discoveries on a pair of cassoni 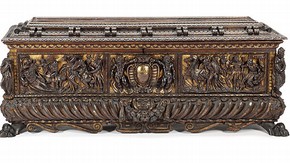 The Victoria and Albert Museum has a large collection of Medieval and Renaissance furniture.
In preparation for the opening of the exhibition At Home in Renaissance Italy in October 2006, a pair of cassoni were returned to the Museum from a long term loan to the National Gallery, London (museum nos 7708-1861 (Figure 1) and 7709-1861). During their conservation some surprising discoveries were made.

The term cassone (large box) is used for decorated Italian chests of the fifteenth and sixteenth centuries. Their decoration changed from painted design in the fifteenth and early sixteenth centuries to carving (sometimes partially gilt) in the second half of the sixteenth century. Many cassoni, made in pairs with a central coat of arms, served as marriage chests. No information has been found about either cassoni before their acquisition in 1861. Josephine von Henneberg ascribed both cassoni to the Sienese artist Bartolomeo Neroni known as Il Riccio (1500-1571). She suggested that they were made to celebrate the new title of Cosimo I de' Medici (1518-1574) as Duke of Florence and Siena.1 On this basis they were dated between 1561, a year after Cosimo's official entrata into Siena, and 1569, when he became the Grand Duke of Tuscany. Her proposals were based on the carved panels and figures on both cassoni, as well as a drawing which may be a preparatory design for them.

The walnut-constructed and partly gilt cassoni have a central panel on the front, depicting a shield held by two cherubs. This panel is flanked by high relief panels on either side, carved with elaborate scenes of ancient Roman history. One cassone (7709-1861) shows Romulus studying the sky, ordering the construction of a new city and the founding of Rome. The second cassone (7708-1861) shows Romulus commanding the Sabine women to be carried off (Figure 2). The figures on the front corners represent prisoners and the end panels display mythical animals. 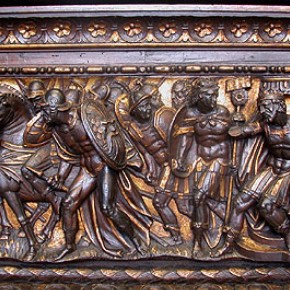 Figure 2. Romulus commands the Savine women to be carried off (7708-1861). (Photography by Thomas Geissler). (click image for larger version)

The drawing, discovered by von Henneberg, depicts part of a cassone with similarities to both V&A cassoni.1 The similarities of the decoration are remarkable: the curled scrolls in the heavy convex gadroon moulding, the division into three panels with the shield in the central panel and the rusticated quoins as well as the corner figures. Links to Cosimo I are found in the carved reliefs. The panels showing Romulus as the founder of Rome could refer to Cosimo I, founder of a state almost the size of ancient Etruria. Romulus is wearing a suit of armour similar to that worn by Cosimo I in a portrait by Giorgio Vasari (Palazzo Vecchio, Florence). One of the mythical animals on the end panels is identified as Capricorn, a zodiac sign adopted by Cosimo I as his impresa after extending his territory over twelve towns, including Siena in 1560. We find later representations show Capricorn with much enlarged wings, similar to that carved on the right-hand panel of cassone 7708-1861. The four prisoners, identified as ancient Dacian captives, had often been represented in the sixteenth century as symbols of the 'new barbarians' and could refer 'to actions taken by Cosimo'.1

Examination accompanying the conservation of the cassoni yielded some unexpected revelations:

All external surfaces have been obscured with a dark coating, which contains varied layers of stain, pigmented and dyed varnishes, wax layers and dirt. Both visual and microscopic examination of this surface coating showed oil gilding on gesso, some areas having a red mordant. The few traces of earlier gilding on the lid and the gadroon moulding, possibly oil gilding, were insufficient to indicate more about the original condition. Underneath the present gilding on the relief panels there was no evidence of earlier gilding or its removal. The dark toning had been deliberately added on top of the gilding, which remains bright and intact underneath. Most of the obscuring dark coating is likely to have been applied at one time, but some elements are varnished light brown whilst others appear dark brown or even black. 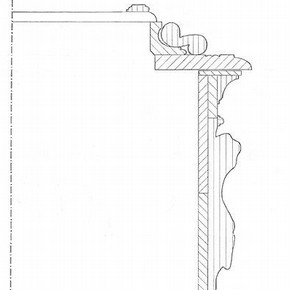 Figure 3. Sectional view of 7709-1861. Elements consturcted in oak and chestnut are displayed in grey. Drawing by Thomas Geissler. (click image for larger version)

The conservation treatment included reattaching loose decorative elements and surface cleaning. Detached decorative elements were re-glued using Canadian fishglue. After gently vacuuming the surface to remove accumulated dust, it was cleaned with water and non-ionic detergent. After discussions with the curators it was decided not to lighten the dark appearance of the gilding or the walnut, as this would produce a patchy surface and reveal previous ill matched restorations.

In conclusion, I would like to propose that both cassoni have been restored and altered, possibly in the first half of the nineteenth century: two new carcases were constructed to carry the elements of a pair of sixteenth century cassoni (Figure 3). Possibly one long front board was cut into the three relief panels and was then applied as three pieces on the carcase, with a newly constructed frieze around them. The resulting joints on the top were concealed with a strip of wood, while the joints on the front and sides between the panels and the frieze were covered with mouldings. The original figures are attached to the front corners, while on the back corners scrolls are applied (probably as a substitute for lost figures). One scroll was constructed in oak during this treatment in the nineteenth century, while three other scrolls in walnut could have originated from another piece of furniture. At this time, there was probably only one apron surviving, which is now carried by cassone 7708-1861. The original detached lid was planed from the inner side, in the same manner as the newly constructed carcase. The gilded and dark-finished surface is part of this alteration in order to conceal the different ages of the materials and to tone down new gilding. It was also a common treatment in the nineteenth century to finish surfaces with dark coatings in order to produce a patinated appearance. Whether or not this pair of cassoni, as originally built, was designed by Bartolomeo Neroni for Cosimo I de' Medici as Duke of Florence and Siena remains unknown.

I am grateful to my colleagues in the Furniture Conservation Studio and the Furniture, Textiles and Fashion Department for their help and advice in writing this article.