An update on lasers in sculpture conservation

Lasers have become a familiar feature in daily life, from bar code readers, CD players and eye surgery to the laser swords of the science fiction film industry. In the last two decades lasers have become an alternative or complementary option for the conservator where commonly-used cleaning methods and highly sophisticated cleaning systems have only been partially successful. Lasers are used in predominantly three areas in conservation: scanning and measuring to establish surface topographies, for example in order to produce replicas, material analysis, and surface cleaning. This small taster of the manifold applications of lasers demonstrates the possibility/opportunity of fine-tuning lasers to their specific purpose of use.

The Victoria and Albert Museum was one of the pioneers in exploring the use of lasers in the cleaning of art objects. In 1972 Kenneth Hempel, the chief sculpture conservator at the V&A at the time, invited Dr John Asmus to give a laser-cleaning demonstration. “In his demonstration John cleaned small areas on several types of stone and marble. Even more surprisingly, he showed how he could remove foxing from prints on paper, again without appearing to damage the substrate material.” Sculpture conservator John Larson returned to the idea of laser cleaning in 1986, when he was Head of Sculpture Conservation, and started collaborating with the laser laboratory at Loughborough University before joining the National Museums and Galleries on Merseyside, where he immersed himself in a broad research project in the field of lasers for cleaning. As part of a collaboration between the Department of Materials at Imperial College, the V&A, the Natural History Museum and the Tate, an Nd-YAG laser (Nd-YAG = Neodymium-doped Yittrium Aluminium Garnet, a crystal used as the lasing medium) was purchased over ten years ago to be shared between these institutions. The continuing collaboration with Imperial College has led to a number of final-year student research projects as well as two doctoral dissertations examining the effectiveness of lasers in the cleaning of objects. 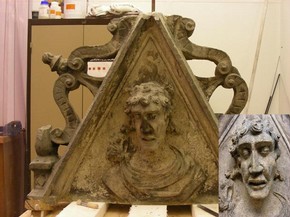 Figure 1 - Head from a French dormer window, 16th century (Museum no. 1142-1905) before cleaning and, inset, after selective laser cleaning (the overall yellow colour in the main images is a result of the artificial lighting in the laser room). Photography by Sofia Marques 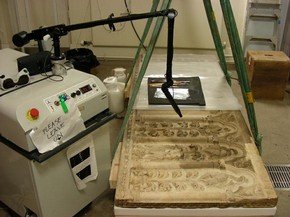 Figure 2 - Combined poultice and laser cleaning of a Florentine marble sarcophagus front from the 14th century (Museum no. 46-1882) with an Nd:YAG-laser in the V&A Sculpture Conservation Studio for display in the Medieval and Renaissance Galleries. Photography by Lisa Wagner

Since then the Nd-YAG laser has been used in the V&A Sculpture Conservation studio predominantly for the cleaning of stone. Laser cleaning was successfully used on several objects for the Medieval & Renaissance Galleries. Leading up to the opening of the galleries, the snapping sound of the ablation process was heard from the sealed extraction room on most days of that year. Using laser cleaning selectively on particularly dark crusts, sculpture conservator Sofia Marques evened out the appearance of a portrait head in the style of a Roman emperor (Figure 1). Other treatments, such as the heavily polluted frontal of an Italian marble sarcophagus, which seventeenth-century travellers to Pisa had praised for its brilliant white appearance, were more complex. Trials pointed to the most appropriate cleaning method as follows: The top layer of dirt was removed with the laser leaving a dotted surface, as can be seen in Figures 2 and 3. A poultice of water and paper pulp was applied to the prepared surface, removed and the softened remaining dirt wiped off using cotton wool swabs. Through fine control of the diameter and power of the laser beam it was possible to target dirt in crevices and recesses. As a result the subtleness of the fine carving is particularly well-illuminated when the panel receives raking light, as one might imagine it for its original setting in a church (Figure 4). 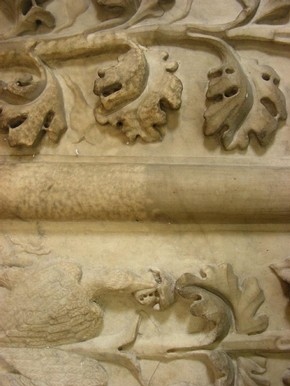 Figure 3 - Detail of Figure 2. The top half shows the dirty object surface before cleaning, in the bottom left area the surface after laser cleaning and bottom right the surface after subsequent poulticing. Photography by Lisa Wagner 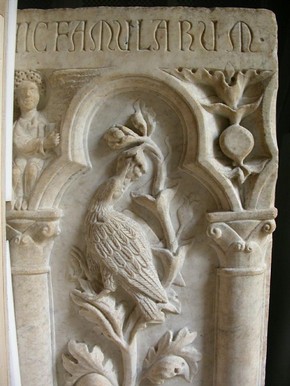 Figure 4 - Detail of the sarcophagus panel after cleaning in raking light. Photography by Sofia Marques

While the Nd-YAG laser can help in many stone cleaning tasks, the risk of damage is still high and must be judged individually for each object. Objects of other materials are often less suited for cleaning with this type of laser, which uses pulses in the nano-second range. One theory is that the impact time of the laser at any one pulse may contribute to the creation of damage to the surface of art objects. Reducing the pulse time may reduce the physical reaction patterns at any one moment of laser irradiation and hence would not allow for certain damaging reactions to happen. Most recently the development of an academic and industrial research interest in pico-second (= 10-12 second) laser applications seems to offer a promising means to overcome problems associated with commonly-used lasers.

During a secondment to the V&A Research Department the opportunity arose for the author to evaluate, together with Professor Ken Watkins from the Laser Group, University of Liverpool, and Dr David McPhail, Department of Materials, Imperial College London, the feasibility of a clearly-defined test procedure for the application of short-pulsed lasers for testing one or two very specific cleaning problems on a material or set of materials that will feature strongly in upcoming V&A FuturePlan projects such as Europe 1600-1800, the Furniture Galleries or the Cast Courts.

While the laser was frequently used in Sculpture Conservation in a conventional way for cleaning of stone, this year also included the theoretical evaluation of future needs and development opportunities, which added an important and exciting dimension to the use of lasers as a complementary cleaning method for the V&A’s collections. If grant income is obtained, collaborative interdisciplinary research will in the first instance be aimed at further understanding the mechanisms involved in the ablation process using pico-second lasers. Short-pulsed laser systems achieve very subtle effects on the surface of an object if used with a pulse length of 20 pico-seconds or less. Simply speaking, less heat is generated, which might change the impact of photo-thermal and photo-chemical reactions on the surface. Parallel to the analytical side of research the pico-second laser prototype needs to be adapted to become a suitable and versatile tool in the cleaning of art objects.

(3) Ablation is the commonly-used term in laser science that describes the removal of material from the surface by laser irradiation.