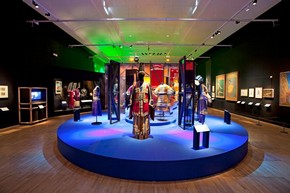 Figure 1 – Entrance to the Exhibition. Objects are raised off the ground by placing them on a plinth; the central area of this plinth rotates gently. Photograph by Peter Kelleher

The Diaghilev and the Golden Age of the Ballets Russes 1909-1929 (DBR) presented the V&A Conservation Department the opportunity to re-assess current strategies dealing with the deposition of dust particulates on Museum objects on temporary open display. With over 300 objects, including seventy-three ballet costumes (37 of which were not cased), this article will focus on the measures taken to manage the dust deposition on these costumes. The exhibition drew greatly on the V&A Theatre and Performance unrivalled collection of Ballets Russes material, loaned objects from other institutions and private lenders and will travel to Canada and Spain during 2011/12.

The aim of the exhibition’s narrative was to demonstrate the unique legacy of the Ballets Russes to the history of performance art, by means of three different languages: music, choreography and art. The overall exhibition design had to maintain the character of “performance”, of fluidity of ideas, had to be creative and original. 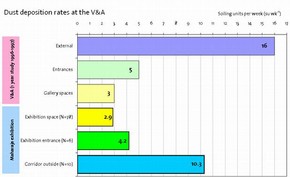 Figure 2 - Dust deposition rates at the V&A from two monitoring exercises. The first one completed over one year between 1996-1997, and a second one during the 'Maharaja: The Splendour of India’s Royal Courts' exhibition October 2009 to January 2010.

Dust monitoring has its origins in the late 1980s when Brooks and Schwar published a paper on dust deposition and the soiling of glossy surfaces. Schwar proposed a dust meter for measuring the reduction in gloss of a shiny surface and introduced the term “soiling”. The method uses clean-labelled glass microscope slides placed at predetermined locations in the exhibition area and exposed for one week. The slides are measured for loss of surface gloss and the results are then expressed as “soiling units per week” i.e. a 1% reduction in gloss is equivalent to 1 soiling unit per week. The method improved upon by Adams (1997) (1) had been performed at the V&A since 1996 in the three types of galleries; air handled (10% air exchange), air conditioned and open to the natural environment, as well as inside museum cases. (2) (3) A follow-up dust monitoring exercise in the exhibition Maharajah – The Splendour of India’s Royal Court in 2009/10 gave an indication of the dust levels to be expected in the temporary exhibition courts (Figure 2). The dust deposition rate is similar to an ambient gallery in the Museum and was lower than expected in spite of the large visitor numbers and the intense building works carried out during the exhibition period of the new Medieval & Renaissance Galleries.

Dust particulate deposition on museum objects on open display consists of two kinds: fibrous particulates (from the objects themselves and from the visitors and their clothing) and non-fibrous airborne particulates (skin, soil, building dust, insect fragments, pollen, pollutants, etc). Whilst the best way to preserve museum objects on display is to place them inside well-built and well-sealed display cases, this can be unsustainable on many exhibition budgets.

A fine balance had to be struck between the concerns of conservation and the Museum’s mandate to promote the accessibility of the collections. The frequency of cleaning was weighed against the risk to the objects. The increase in handling, the object’s condition, and previous conservation treatments were all taken into consideration. Dust particles trapped against an object’s surface can be abrasive; dusts can react directly with an object, may affect the appearance of objects, absorb moisture from the atmosphere and thus pose a risk of staining and corrosion. Dust may also become a pest management-risk as an accumulation of dust particulates may trigger an increase in pest activity as it becomes a source of food. As an unsightly level of dust deposition is unacceptable to the public, the perception of dust is also important. For Conservation staff the risk of “imbedded” dust particulates on the objects constitutes a special challenge, as these can be very time-consuming and difficult to remove. 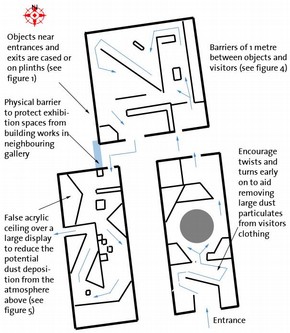 Figure 3 - Plan of the Exhibition with the visitor flow marked in blue. Measures to reduce dust deposition are indicated.

From the design perspective, we were very fortunate to work with an award-winning design group comprising Tim Hatley, Production Designer, and Angela Drinkall and Paul Dean of Drinkall & Dean, who were appointed in August 2009. From the outset, discussions between Conservation and the Design team embraced the recommended strategies for placing objects on open display (Figure 3):

Other strategies which may be considered during the planning of future exhibitions are to encourage visitors to remove overcoats before entering the exhibition; to lay “dust-mats” of adhesive-surface type at all internal and external doors leading to exhibition areas and replace regularly; to lay a looped-type synthetic carpet along the corridor leading to the exhibition space which would be vacuum cleaned daily.

An exhibition such as DBR gives the V&A the opportunity to showcase a highly significant aspect of the collection, stimulates scholarly research, and brings conservation issues into prominence. Dust particulates introduced by large numbers of visitors in a concentrated period of time can have a great impact. It is imperative to raise the awareness surrounding the risk to objects on open display at the initial design stage. As an ongoing strategy, Conservation monitored the exhibition weekly. Two sessions of low-powered surface cleaning were carried out during the exhibition by Textile Conservation and V&A technicians. The resulting analysis of a five week study on the dust deposition with data collected from key points in the galleries will be a valuable reference tool in the planning of future major Exhibitions. The study was carried out by V&A Conservation Science during the final weeks of the exhibition period. A conclusive report will be made available at a later date. 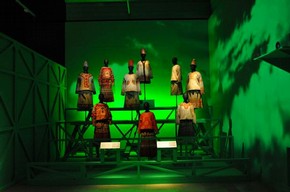 Figure 4 – The tiered display of nine 'Rite of Spring' costumes. A one metre distance barrier designed as integral part of the display protects objects without drawing attention to its physicality. Photograph by Bhavesh Shah 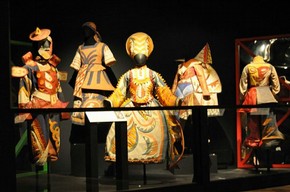 Figure 5 – Open display of five costumes from 'Chout' with a one metre high acrylic barrier and a false ceiling to protect objects. Photograph by Bhavesh Shah