Keep Your Hair On - The development of conservation friendly wigs 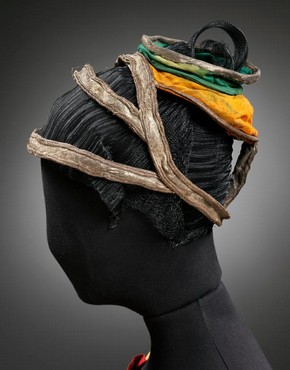 One of the challenges we regularly encounter when displaying head wear is how to achieve a good fit with proper support when headdresses are designed to be worn upon elaborate hair styles. The solution to this quandary would appear easy enough; give heads hair. This seemingly straight forward answer was not as easy to apply as one might think largely due to exhibition designers and curators desire to display objects on non-realistic, abstract mannequin forms. This current trend is considered least distracting to the audience’s appreciation of the costume its self. The Autumn 2010 exhibition Diaghilev and the Golden Age of the Ballet Russes, 1909-1929 featured an array of head wear where the issue of hair had to be addressed. The headdress (S.607: A-1980), belonging to the character of the ‘Greek Girl’ from ‘Narcisse’, was very large and when placed on a standard abstract Proportion Ltd head it fell over the ‘face’. Historically, the solution to this problem would have been to pad the head with wadding until the object fitted. However, this approach would have left the ‘Greek Girl’ with an unusually bulbous cranium. The second option was to construct a supportive armature that would enable the headdress to ‘float’ around the head. Whilst this type of mount would have supported the object, it was felt that a more interpretive solution was required. The headdress did need to be worn with hair.

Any hair would have to fulfil a number of functions. Firstly it should cushion and offer support to the fragile object, it should be visually in keeping with the abstract style of the Proportion figures chosen and also be robust enough to withstand display at multiple venues as the Diaghilev exhibition was destined to tour internationally. A literal representation of hair was immediately ruled out as it would have been out of place with the black, featureless Proportion faces. Paper and Milliner’s buckram had been used to represent hair in previous displays, but neither material offered the soft cushioning required to support the headdress. Paper has inherently sharp edges and buckram has the added problem of being stiffened with an adhesive so was therefore not a suitable fabric for direct contact with the object.

Milliner’s Crinoline (Crin) is an open Nylon mesh traditionally used for making bows and other decorative hat features. The material had been experimented with as a mounting material and it was felt that Crin had the potential to offer a solution to the problem of producing object-friendly abstract hair. Having first established that, as a thermo-set plastic, Crin could be set into curls with the use of a hot air gun, the greatest challenge was to find a method of cutting the material without it fraying. Heat cutting did melt the strand ends together but produced an undesirable rough edge. The only workable solution was to cut and machine stitch tubular lengths with the raw edges folded in. Once heat set into the appropriate tightness of curl, they could be attached and styled onto the head.

It was felt that Crin was a suitable choice of material for mounting several oversize female and male hats and headdresses in the Diaghilev exhibition as the Nylon maintains its smooth form whilst being springy enough to cushion the object. The textured open weave of the black Crin provided a representation of hair that blended with the subtlety of the black abstract Proportion heads (Figure 1). Happily, both white and black samples have passed the British Museum’s accelerated ageing test and been found suitable for permanent use (tested by S Penton, British Museum, 4 November 2009). 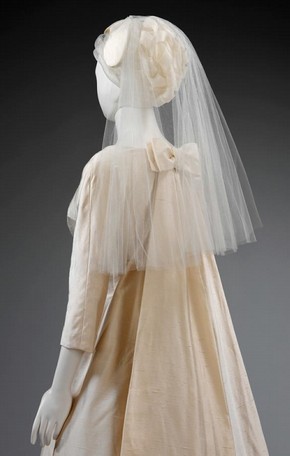 Alongside the Ballet Russes exhibition, 2010 has also seen the mounting and preparation of Wedding Dress, an exhibition which celebrates and explains the cult of the white dress from 1820 to the present. Again this has presented the dilemma of how to display hats and headdresses in context, together with the rest of the bridal outfit. After all, a veil or hat is traditionally an integral component to a bride’s attire, as is the elaborate hairstyle arranged beneath it.

As with many V&A exhibitions, a mixture of mannequins have been chosen for the display of Wedding Dress, supplied by both Proportion Ltd, as mentioned above, and H&H sculptors, who specialise in realistic, conservation grade, fibreglass figures. H&H figures were used particularly where heads were required, as it was felt that heads with facial features were more suited to the objects than abstract heads, and once again, it was felt that the addition of wigs fabricated from Milliner’s Crin would supply suitable volume, shape and support beneath the objects. In preparing wigs for Wedding Dress however, several new challenges were met including; how to attach the veils and headdresses to the Crin, how to go about attaching the Crin to fibreglass heads, and how to travel the objects safely and securely to multiple international venues.

One of the main aims of mounting costume and accessories for touring exhibitions is to reduce the handling of objects at each venue. With costumes, this is generally achieved by travelling garments on their mannequins to prevent unnecessary dressing and undressing and by a system of soft packing which protects and encloses the garment. It was felt that this approach would be of immense value when packing the veils and headdresses; therefore, a method was required whereby the headdresses could be securely attached to their wigs while the wigs themselves remained removable from the fibreglass heads. Thus, the wigs could be used to handle and support the objects as they are positioned on, or removed from, the heads. 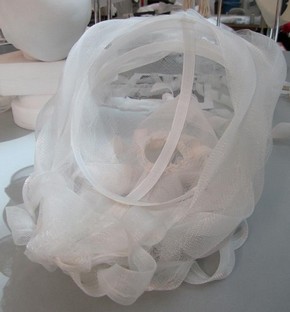 Figure 3 - Detail showing the Rigilene™ frame which holds the wigs to the fibreglass heads. Photography by Keira Miller

To achieve this, the wigs were built onto Rigilene™ frames, which are designed to clip onto two painted brass hooks which were screwed into the fibreglass heads. To create the wigs themselves, skull caps were made using strips of Crin with the edges finished as already mentioned. These are stitched into a tube and the top edge is gathered to form a dome. Onto this, twisted and curled pieces of Crin were stitched in place with nylon filament thread to create the desired hairstyle. For travel therefore, the wigs are easily removed from the heads with the headdresses remaining attached. Two custom-made silk bags are placed over the ensemble, one protecting the object, the other encasing the wig. The wig is then placed onto a Plastazote™ dome, which holds it in place within a foam core box, and is further supported by net-filled silk puffs. The wig consequently acts as a safe and secure mount both for the display and travel of the object.

For both the Diaghilev and Wedding Dress exhibition, Milliner’s Crinoline has proved to be an exciting addition to the materials used for costume mounting at the V&A. Available in a huge range of colours, it is inexpensive, easy to mould, stitch and shape, and is sympathetic to the objects. It provides well-cushioned support for the objects during display and travel while also aiding audiences in their interpretation and understanding of the aesthetic value of the pieces on display.