The conservation and mounting of objects for the upcoming Wedding Dress exhibition in 2013 is one of the projects currently being undertaken by the V&A’s textile conservation studio. Several of the smaller items in the exhibition, such as the wedding wreaths, favours and garters contain wax and wax-coated silk flowers and came in to the studio in a poor condition. As the exhibition will travel and be displayed at other museums before being shown at the V&A, the objects needed to be stabilised in preparation for the touring exhibition. The techniques of conservation of wax and wax-coated fabric were new to the studio, so training was required in order to carry out treatments on the objects.

In March 2010, the V&A’s textile conservation studio organised a one day ‘conservation of wax master class’, which was taught by Valerie Kaufmann, Director and Senior Restorer at Plowden and Smith Ltd. The master class was attended by five colleagues from across the V&A conservation department (textile and ceramics conservation) and two external conservators, one from the British Museum and one from Hampton Court Palace. After an initial lecture about the types of waxes found in objects, agents of deterioration and the potential problems likely to occur in such objects, Ms. Kaufmann demonstrated some common conservation techniques, such as cleaning, infilling and adhesive treatments. The textile conservation studio is fortunate to have a collection of wax coated flowers and objects in its handling collection, which were suitable both for testing and experimenting by the participants. Brenda Keneghan of the V&A Science Section undertook Fourier Transform Infrared Spectroscopy (FTIR) testing of the studio’s wax collection in order to identify the type of wax present and to provide useful examples for discussion. Each participant received a folder of information detailing treatments, documentation and a bibliography. The master class provided the opportunity for new skills to be learnt and incorporated into the textile conservation studio’s repertoire. Some accessories and objects in the Museum’s collections often contain wax-coated elements which can in future be treated as a result of the training received. 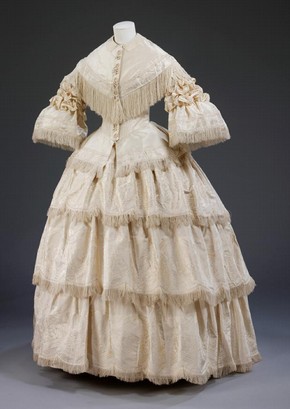 In total six objects with wax and wax-covered flowers were treated in preparation for the Wedding Dress exhibition. The one with the greatest requirement for treatment was a wedding wreath (T.10B-1970) of wax orange blossom spray (Figure 1), thought to have been worn by Margaret Lang on her wedding day in 1857. The wreath is to be displayed flat on a board next to Margaret’s wedding dress (Figure 2). The wreath was in a poor and fragile condition with loose and broken elements, including a large flower which had become detached from the main wreath. It was generally dirty with loose particulate soiling on the petals and leaves. Some ingrained dirt was visible in the wax coatings, especially in between the petals and near fixings. The wax covered petals were very loose and were cracking in places. The wreath was gently cleaned with a low suction vacuum and soft sable brush to remove the loose particulate soiling. In order to remove some of the ingrained soiling, cleaning experiments were first carried out on a similar object from the studio handling collection. Various solvents were tested including saliva, deionised water, and an acetone: white spirit: isopropanol mix (in a 6: 0.25: 1 ratio) (1) as well as a detergent solution (Dehypon LS45, a non-ionic dertergent, used at approximately 5%). Microscopic photographs were taken before and after experiments in order to compare the results. It was found that cleaning with saliva on a cotton swab and rinsing with deionised water was by far the most effective method and the least disruptive to the surface of the wax. (2) 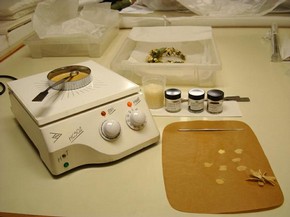 The next stage in the treatment was to infill the areas in the wax which were cracked or missing. Pure beeswax is melted in a metal container on a hot plate at approximately 70˚C and mixed with pigments to match both the colour and opacity of the existing wax. The coloured wax has to be left to solidify to ensure the most appropriate match (Figure 3). Once a suitable match is created, cracks and missing areas are infilled using the wax which has been melted on a hot spatula heated with a spirit lamp (burning methylated spirits) under extraction. The molten wax is drawn slowly along the crack and layered to build up the infill structure. The speed of the method is vital as the wax soon hardens when cooled and becomes useless. This technique was practised on the studio samples before treatment on the actual object began. The petals on each flower as well as on the detached flower were treated in this way in order to strengthen these elements. Where petals were loose, a small amount of neat Lascaux 360 HV acrylic adhesive was used to secure them in place.

Once the large detached flower had been cleaned, consolidated and supported, it was reattached to the wreath using a size 00 stainless steel entomological (insect) pin, which was cut to size and used as a splint in order to strengthen the fixing. This was fixed in place using a small amount of neat Lascaux 360HV. In order to disguise the fixing, the splint was wrapped (in the same way as the existing stalks) using Japanese paper, painted with acrylics to match the stalk of the flower. This was also adhered in position with a small amount of Lascaux 360HV.

The wreath was held in place on its display board between two small metal rods covered in polyethylene tubing. A small stitch of Skala™ polyester thread was used to fix the wreath in place so that movement would be kept to a minimum whilst travelling. Fixing the object to the board also reduces the need for handling the object. The wreath is in a much more stable condition after treatment and is safe to be part of the travelling exhibition, although is still fragile and handling should be kept to a minimum. Aesthetically the wreath is now as complete as possible and its appearance is much improved.

With thanks to Valerie Kaufmann, Director and Senior Restorer at Plowden and Smith Ltd., and to Marion Kite, Head of Furniture, Textiles and Frames. Also to Edwina Erhman, Curator of Textiles and Dress and to Brenda Keneghan for carrying out testing.