Two of Constable’s six foot sketches have been on near continuous display at the V&A since they were first loaned to the Museum in 1862 by Henry Vaughan. They now begin a two-year absence when they will be travelling to European and American venues as part of an exhibition of Constable’s sketches. The occasion of this exhibition prompted their conservation and restoration over six months in 2010.

Much admired by artists of the late 19th and 20th centuries, the two publicly-displayed painted sketches for the Leaping Horse and Haywain compositions greatly influenced Constable’s posthumous reputation. Yet these preparatory works were never intended for widespread consumption, and instead were used privately by Constable to translate his small scale sketches into the large scale landscape compositions of the same subjects that he submitted to the Royal Academy Summer exhibitions. This process is described in detail in the catalogue for the 2006 Tate exhibition, where the sketches were displayed alongside their finished versions. (1) The V&A sketches (986-1900 & 987-1900) appeared gloomy and muted in comparison, veiled by their discoloured yellow varnish layer.

New digital x-radiographs of the two sketches are particularly useful for understanding the canvas supports. The Sketch for the Haywain was painted on a plain weave linen canvas, which has had a glue paste lining. At the time of the lining most of the tacking edges were removed. The lower edge of the image was previously thought to have been painted over an unfolded tacking margin; it was therefore assumed that the lining had taken place during the painting process. (2) This is no longer thought to be the case. There are neither tack-holes along this edge nor any sign of a fold-line. 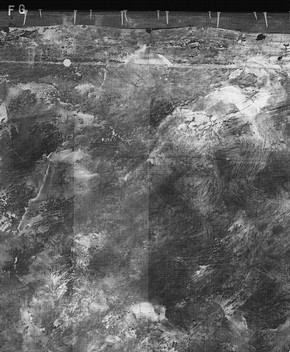 In contrast the Sketch for the Leaping Horse shows clear evidence of having been removed from its stretcher during painting with Constable’s sky continuing over the unfolded upper and right tacking edges. The edges were roughly flattened, and the lip in the canvas continued to catch paint as the edges were reworked to expand the sky by some 5cm in height. In places, Constable’s palette knife spreads paint across this lip, preserving the canvas crease beneath the upper smooth surface (Figure 1).

Subsequent changes were made at the time of lining: the original tacking margin at the left was trimmed away; the painted areas of the right-hand and bottom edges were also trimmed; and the canvas was extended at the top by a triangular infill. Examination of the x-ray suggests that this piece was cut from the painted bottom edge and inverted for use at the top. (3) Both paintings are currently displayed in matching frames, supplied by Henry Vaughan when they were loaned to the V&A in 1862, as indicated by paper labels. The paintings both fit tightly, indicating that the changes in format made by lining must have occurred some time after Constable’s death and before they were loaned to the Museum.

The earliest treatments of the paintings were by C.R. Leslie, friend and biographer of the artist, who bought them at the estate sale and cleaned the surfaces with his son. They were subsequently purchased by the art dealer D.T. White, who probably commissioned their lining and restoration, prior to their acquisition by Vaughan. (4) There is no record of their having been treated at the V&A, either whilst they were on loan, or subsequent to the Vaughan bequest in 1900. The retouching used to integrate the canvas infill on the Leaping Horse sketch lies beneath the varnish layer, suggesting that it was varnished after lining in the mid 19th century.

The yellowed and opaque varnish was removed with appropriate solvents, revealing the original variety of colouring (Figure 2). Subtle gradations of cool yellow and white were revealed as distinct where they had previously been uniform (Figure 3). The fresh tonality of the cleaned sketches was much more in keeping with the finished versions of the pictures in the National Gallery and Royal Academy collections. The cleaned ‘six-footers’ form a striking comparison to small scale sketches in the exhibition which have remained undisturbed by later interventions, such as the unvarnished, unlined sketch of A river scene, with a farmhouse near the water’s edge (V&A141-1888). 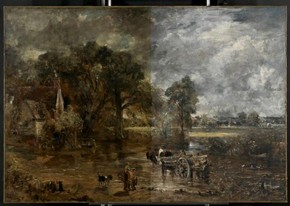 Figure 2 - Sketch for the Haywain half cleaned. Photography by Richard Davis 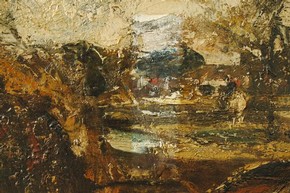 Figure 3 - Detail of the Sketch for the Leaping Horse during cleaning. Photography by Rachel Turnbull 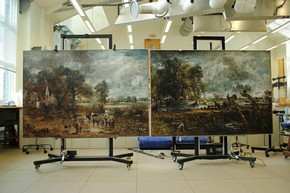 A varnish layer of Paraloid B72 was applied to both pictures. This resin provides a low-gloss finish which offers physical protection, whilst maintaining the impression of an unvarnished surface, in keeping with Constable’s practice for his sketches. The Leaping Horse sketch had suffered some small flake damages in the past and a scratch to the sky paint in the upper right corner. The Haywain was in almost perfect condition with only a few small scale losses. These areas were retouched mimetically using Gamblin conservation colours (Figure 4).

The turnover edges of the lining canvases were weak and friable, and beginning to fail. The lining canvases were cut at the turnover edge to remove them from their stretchers and the laminate was strip lined and restretched, leaving the lining canvas tacking edges in place beneath. As described above, these linings did not date to Constable’s lifetime, but as there had been some doubt in the past as to the status of these additions, we wished to preserve the evidence with the objects. For the same reason, we also retained discoloured overpaint on the triangular infill at the top of the Leaping Horse, as well as overpaint that continued onto the paper used around the cut edges of the original canvases.

We were fortunate that so much was known about the paintings’ techniques and conservation history, and we are indebted to the work of others who have explored the often complex restoration histories of the six-foot sketches. (5) Whilst the structural treatment, unseen behind their 19th century frames, offers essential protection to the works whilst travelling, it is the cleaning of the pictures which has made the most visible transformation, revealing the fresh tonality and energetic bravura handling which Kenneth Clark believed made the V&A sketches: ‘Constable's most successful works… perhaps the greatest pictures ever painted in England.’ (6)

We are grateful to Rachel Turnbull for her work on the conservation of the Leaping Horse sketch prior to her appointment as Senior Collections Conservator, Fine Art at English Heritage in May 2010. The authors thank Mark Evans and Anne Lyles for their encouragement during the restoration. Lucia Burgio undertook essential analysis of the paint layers of both paintings which informed the cleaning process.

(3) Noted by Natasha Duff in examination undertaken in 2006