The effects of fingerprints on silver 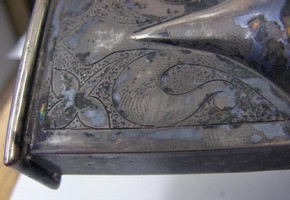 It is accepted conservation practice to wear gloves when handling silver objects. This is because fingerprints, apart from being visually distracting through the leaving of a surface deposit, will also corrode the metal, eventually leading to loss of the original surface. Although conservators have numerous examples of fingerprint corrosion (Figure 1) no work had actually been done in the conservation field to quantify or examine the rate of corrosion caused by fingerprints. In 2007 some experiments to look at the problem were started by Dr Peter Northover, Dr Vanessa Cheel and Chris Salter of the Department of Materials, University of Oxford with Dr Geoff Grime and Brian Jones of the Surrey Ion Beam Centre, University of Surrey, along with the author of this article. The following is a précis of the full report presented at Metal 2010: International Conference on Metal Conservation held from the 11-15th October 2010 in Charleston, South Carolina, USA.

As might be expected the vast majority of work on fingerprints has been done in the area of forensic science, however forensic work is primarily concerned with methods to enable the fingerprint to be detected over longer periods of time. Recently there has been an expansion in studies of fingerprints, both recognising their corrosive effects (Bond 2008) and offering new ways of characterising their structure. A result relevant to conservation obtained by Bond was that the intensity of corrosion was strongly dependent on humidity and that keeping a sample in a desiccator greatly slows corrosion. However, no new results were reported on silver so this work aims to fill that gap.

Rectangles or ‘coupons’ 20 x10mm were cut from fine (99.9%) and sterling (92.5% silver, 7.5% copper) silver strip. They were mounted in a phenolic resin and then polished. In December 2007 a thumbprint was placed on each coupon. Half the samples were left in an open tray in a regularly used office and the rest placed in a well-sealed box. The coupons were examined at intervals of 8-10 weeks at both low magnification using a stereo zoom microscope and at higher magnifications using a metallographic microscope with normal reflected and polarised illumination. At the same time non-contact surface profiling was carried out using a NanoFocus instrument and infra-red spectra were obtained using an infra red microscope. It was anticipated that changes in the profile and composition of the fingerprints might occur as corrosion products were produced, dust gathered and organic compounds evaporated or oxidised.

While the geometry of the fingerprint remained stable, marked differences gradually developed between the effects on fine and sterling silver, and these differences were systematic, i.e. the same effect appeared on all the coupons of each group and there was no correlation with the order in which the prints had been applied. The initial fingerprints showed a pattern of ridges with clusters of particles and areas of moisture within the ridges. Within six months the sterling silver surfaces were covered with pieces of dust, fluff and fibre but the fine silver surfaces showed only small pieces of dirt, and no fluff or fibre, however the fine silver samples were beginning to show areas of tarnish.

Routine monitoring of the samples was done with scanning electron microscopes (SEM) both equipped with an energy dispersive X-ray spectrometry (EDX) system. Additionally, one of the two scanning electron microscopes used 3-D visualisation software. Small area and pinpoint EDX analyses showed the presence of carbon, calcium, oxygen, sodium, sulphur, chlorine and silver in the fine samples and carbon, calcium, oxygen, copper, aluminium, silicon, sulphur, silver and less obviously chlorine on the sterling samples. The sodium was present as sodium chloride crystals which appeared to be more common on the fine silver. Organic particles were mainly fibres, for example from paper or tissue, with a few skin scales. Because the experiments were made in an environment where silicon wafers are processed sub-micrometre particles of silicon were also observed. 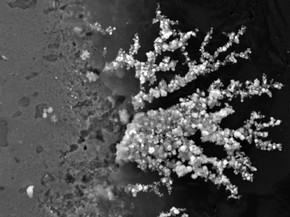 Copper-containing particles appeared in the sterling silver surface within 2-3 weeks and by 15 months the growth of deposits on the copper-rich regions of the silver was very visible (sterling silver contains 7.5% copper to harden it). In the mature samples both cuprite and copper oxychlorides were observed in these deposits. After two years silver chlorides were also detected. The implication is that the copper-rich phase in sterling silver is attacked quickly but the early stages of corrosion were more difficult to follow in the fine silver. Nonetheless, mature samples clearly exhibit silver chloride particles growing at pits in the fine silver surface. The 3-D software was used to enhance the visualisation of the particles and measure the size; the ones selected project about 0.5 micron above the surface. An unexpected result of the corrosion process was the growth of fans of silver chloride at the boundary between the coupons and the resin mounts, possibly assisted by moisture in the crevice at the edge of the sample (Figure 2). This growth has occurred on both fine and sterling samples and caused intense pitting along the edges of the samples.

These experiments show conclusively that fingerprints actively corrode both fine and sterling silver and that the reactions can effectively start with the application of the fingerprint. The visible pitting observed means that removal of the surface of the silver is required to eradicate it, possibly as much as 2 microns at a time, although this has yet to be quantified. This means that liquid solutions for tarnish removal which typically involve an acid (sulphuric or phosphoric) and thiourea, while attacking the silver surface, may well not do so to a depth sufficient to remove the fingerprints. If a hallmark stamped onto silver to a depth of half a millimetre on a silver object was cleaned to remove the fingerprints every couple of months, it would disappear in just over 40 years, along with any engraving the silver object may have had. In the forensic world, though, the fact that fingerprints etch metals is a useful aid to their preservation.