Conservation of a child’s fairy costume 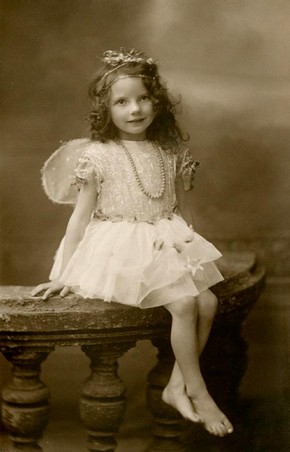 In October 2011, the Museum of Childhood at Bethnal Green opened a major touring exhibition Magic Worlds delving into the realms of fantasy, illusion, enchantment and sorcery. One of the objects brought to the Textiles Conservation studio for treatment was a child’s fairy costume (Misc.105-1986). The dress and wings had been donated to the Museum along with a photograph (Misc.105B-1986) of the outfit worn by Eileen Brock, then aged 5, and dated 1920 (Figure 1).

The simple cotton dress has a metal tinsel overlay on the bodice. The structure of the tinsel is that of narrow metal strips (shown by XRF to be a silver and copper alloy), around which white cotton bands have been woven at regular intervals. The gauze sleeves and gathered skirt are decorated with silk flowers on a metal cord and flower-shaped sequins. The wings are also of gauze, shaped with metal wire, and decorated similarly to the dress. The original method of fixing the wings to the back of the dress has been lost, except for a solitary popper on the back of the proper left shoulder.

The effects of use, and inappropriate long-term storage had changed the appearance, and the condition of the costume. The wings were distorted, the gauze creased, and there were losses to the tinsel edging. The dress was flattened, with heavy creasing throughout, particularly noticeable on the skirt and sleeves. The cotton gauze was discoloured with pale brown soiling. The tinsel over the bodice was misshapen, with the individual metal strips twisted, folded, and pulled out of alignment. The silver had tarnished to a dark grey colour, and there were many loose metal ends. The silk flowers were all flattened, some were detached from the dress, and many were splitting along the crease lines.

The aim of the conservation treatment was to improve the overall condition, and aesthetic of the dress, with the treatment broken down into the following stages: 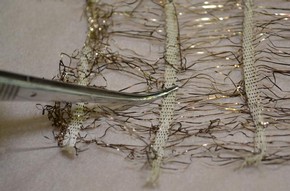 The possibility of wet cleaning the dress was considered and dismissed. The metal elements were vulnerable to handling, and the cord between the silk flowers had evidence of corrosion. The soiling on the skirt and sleeves could be reduced using localised spot cleaning. This method also allowed particular stains to be targeted, and areas of metal to be avoided.

With thick blotting paper beneath, the gauze was gently sponged using de-ionised water. The brown soiling was gradually transferred to the paper below, which was replaced as it became saturated. The gauze was laid out flat to dry, ensuring that the creases could not re-form. The process of dampening the gauze had the additional effect of reasserting a stiffener in the fabric. Instead of hanging limp, the skirt regained its volume, and the sleeves supported themselves without creasing.

In order to conserve the tinsel, it was removed from the dress. Although it is preferable not to remove original stitching, it would not have been possible to re-shape or support the tinsel in situ. Following detailed documentation, the tinsel was removed. After pinning onto a soft board, the white cotton bands were straightened, and the creased metal strips unfolded with round-nosed tweezers (Figure 2). Once flat and square, the shape of the tinsel was traced to create a template for the support. Stabiltex, a sheer woven polyester fabric, was chosen, prepared using the hot cut method. (1)

The Stabiltex support was stitched to the reverse side of the tinsel, around the edges and along the length of each white cotton band. By securing the tinsel to a support fabric, its shape has been fixed, and can no longer stretch or distort. The obverse side of the tinsel was covered with a fine conservation net, with the stitching again positioned along the white cotton bands. The conservation net acts to encapsulate the metal strips, including loose ends, to prevent any further snagging. The presence of the net is not immediately visible, and did not obscure the tinsel beneath. The tinsel was reattached to the dress using a fine polyester thread (Gutermann Mara 120) and an open running stitch. The two sides at the waist were whip-stitched together as were the original. The hook-and-eyes, and popper, were reattached using the original stitch holes. 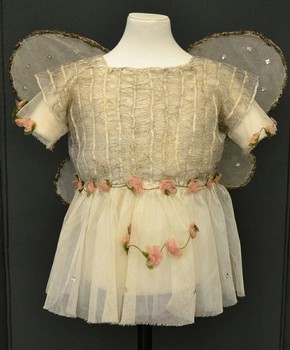 Figure 3 - Dress and wings after c0nservation and mounting. Photography by Katy Smith

The silk flowers were humidified using an ultrasonic humidifier, this restored some of the volume that had been lost in flat storage. Any loose flowers were then stitched back in position using a fine polyester thread (Gutermann Mara 120).

The wings were gently re-shaped by hand, which had the effect of pulling the gauze taught, reducing the creases. The close proximity of the metallic sequin decoration made spot cleaning of the gauze difficult. Surface particulates were removed with a museum vacuum, while the small stains were left untreated.

The dress was mounted onto a custom-built buckram mannequin. (2) The wings were stitched to an acrylic mount prepared by Technical Services, using polyester Scala thread through pre-drilled stitch holes. The wing mount was attached to the mannequin with a screw fixing, allowing it to be removed for transit of the object.

The conservation treatment was very successful. By humidifying the skirt and sleeves, the brown soiling was reduced, and the heavy creases were removed. The tinsel bodice had been reshaped and encased, to protect it from further damage while remaining visually unobtrusive. The buckram mannequin was created to the specifications of the costume, with all areas of the dress supported. Additional soft net stitched to the mannequin has provided volume to the skirt. The wings were supported onto the custom acrylic support, and secured to the back of the figure (Figure 3).

I am grateful to Lucia Burgio for conducting XRF analysis; to Nicola Breen for creating the acrylic wing mount; and also to Joanne Hackett for her ongoing support and advice.