An ‘Exploded’ Replica of a Commode

The exploded replica of the Cramer commode (Figure 1) is one of several replicas commissioned for the new Dr. Susan Weber Gallery for Furniture, which opened in December 2012. The detailed brief issued by the Learning Department described the purpose of the exploded replica as a means of helping the visitor understand how the Cramer commode, made by Mathieu-Gillaume Cramer in Paris around 1770-5, is constructed underneath its ‘skin’ of veneers, metal mounts and marble and, in particular, the jointing techniques used in its construction. Moreover, it is hoped that this understanding will generate appreciation of the construction techniques used in related exhibits. The replica has two elements: the exploded left half of the commode carcase and the exploded half of the middle drawer assembly. The exploded replica will be supplemented by an explanatory diagram on the adjacent interpretative ledge.

Detailed notes were prepared by the furniture conservation and curatorial teams outlining the methods used in the construction of the Cramer commode (Figure 2), the carcase of which was probably made by the craftsman known as RVLC (Roger Vandercruse or Lacroix). These notes, together with an illustrated publication of eighteenth-century French furniture, proved invaluable in assessing the precise construction techniques used by the original cabinet maker. 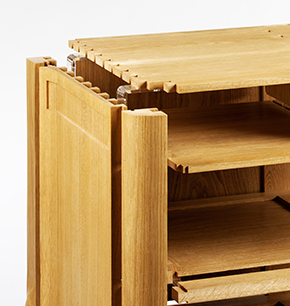 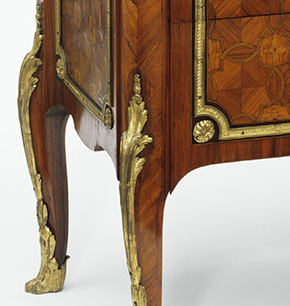 Underneath the exquisite decorative veneers and the gilded brass mounts lies an oak carcase that is not always as finely made as the surface decoration might imply. The carcase is made of European oak of various sections and cut. The occasional quarter-sawn board was used in the cabinetwork but it would appear, by the informal arrangement of these boards, that this was simply the material at hand rather than chosen for structural stability. Grain direction, cut and board widths were observed and the timber used in the replica was selected and machined to closely match that of the original.

Before work could begin on the replica, every carcase part and sub-assembly was measured and drawn. This process was painstaking since the accuracy of the replica relied on these detailed measurements, drawings and templates. Particular attention was given to the joints used to connect the carcase parts and sub-assemblies. A surface examination of these joints often cannot reveal the specific dimensions or hidden construction detail (mortise depths, shoulder widths and housing details). Importantly, it appeared that the joints connecting the short horizontal rails to the vertical end panel were not dovetail housings as originally believed. This threw into question the type of joint used to connect the front horizontal rails to the front stiles. To gain an accurate understanding of these concealed joints, X-ray imaging was used. Although the images were not always explicit, it was possible to appreciate that the front horizontal rails were indeed dovetailed to the front stiles. Specific measurements for the mortise and tenon joints were also revealed by the X-ray images.

Every detail was copied from the Cramer commode, including the exact dimension and angle of each pin and tail used in the carcase dovetailing and drawer dovetailing. Although this detail has been minutely observed and replicated, it was understood from the start that this attention to detail would be imperceptible when the commode was displayed in its exploded form.

The success of the replica as a learning tool for the visitor relies entirely on a considered method of exploding the carcase. At the outset, it was agreed that an accurate full-size model of the front left-hand corner would be produced as a means of testing options for mounting the exploded elements (Figure 3). The furniture maker, mount maker, curatorial and interpretation teams collaborated to find a solution. 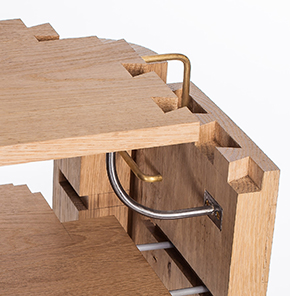 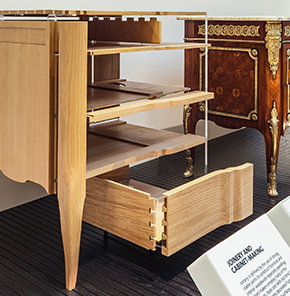 The structure and stability of a freestanding piece of furniture relies on the joints that hold it together. In the exploded replica it is the mounts bridging and connecting the carcase parts that provide the structure. A metal mounting system was proposed that would be strong yet unobtrusive. However, clear acrylic mounts were chosen because plastic is obviously a foreign material and could not be mistaken as eighteenth century. To give the exploded half carcase the necessary strength, a solid clear acrylic end panel was used. This was connected to a solid, clear, back panel and secured to the back rails of the commode forming a rigid box structure. The fielded oak back panels and framework were float-mounted on to the surface of the acrylic back panel rendering this rear structural element virtually invisible from the front.

The positioning of the exploded replica alongside the Cramer commode was predetermined. However, the positioning of the exploded drawer was a difficult curatorial decision. Hovering too close above the commode it could be mistaken as part of the commode carcase, too high and it would become awkward and confusing. The solution is a comfortable arrangement: the drawer sits forward off the replica and floats just above the plinth. The foreshortened drawer neatly tucks into the imagined mirrored centre line, allowing the stiles to be uncrowded (Figure 4).

The surface finish of the explode replica was discussed in the contexts of authenticity and display. The original carcase would have been left raw for the application of the decorative veneer work. However, the replica will be on open display and requires a finish to protect the surface from dust and smudging, during cleaning. A low lustre, water based lacquer was the chosen surface finish. To suggest an unfinished appearance, the lacquer was applied to every exposed surface.

The replica commode owes much to modern machining technology, particularly in the dimensioning of timber. However, authenticity in production was preserved by the predominant use of hand tool techniques inherited from the eighteenth-century cabinet maker.