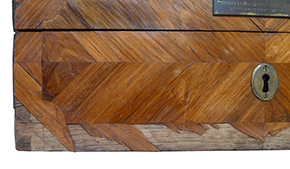 As actor, playwright and theatre manager, David Garrick transformed British theatre in the eighteenth century and is still one of its greatest heroes. He was also a collector of fine objects, many of which have found their way into the V&A’s collection. In 2011, the Museum acquired a Sèvres tea service (C.57-2011) in its fitted case and there is strong evidence to suggest it was the same one Garrick purchased on a visit to Paris in 1764.

The carrying case is constructed from oak and veneered with tulipwood (Dalbergia decipularis) in a chevron pattern. The interior receptacles are made from stiff paper board and lined with green watered silk. A metallic braid surrounds the edges. The Sèvres porcelain tea service with blue and gold borders is decorated with red hop staves and festoons of hops with red berries. They are marked with date letters of 1760 and 1764 together with the painters’ marks of François Fontelliau and Louis Jean Thévenet (père).

The ceramics were in good condition and only required a light clean. However, the wooden case had fared less well. There were extensive losses to the veneer, many parts of which were loose and lifting (Figure 1). It was also missing one of its brass handles and the silk lining was very dusty. Close examination under ultraviolet and natural light suggested that at some point an original surface coating had been removed and a new natural resin coating had been applied. The surface fluoresced bright orange under ultraviolet, characteristic of shellac, and the edges of the veneers had been thinned: evidence of scraping or sanding.

Currently, extensive loss replacement is not carried out on the Museum’s collection of furniture and wooden objects, unless this aesthetically distracts from the overall appearance of the object, or is critical to its structural stability. However, for the treatment of Garrick’s tea service, funding was sought from the Garrick Club’s Charitable Trust to allow a more extensive treatment to be carried out with the replacement of the major distracting losses.

Loose veneers were stabilised and re-adhered using hot animal glue and an assortment of clamps and shimbari sticks (flexible fibreglass rods braced against a frame). New tulipwood veneer was sourced for the losses. Freshly cut tulipwood is striking, with contrasting stripes of bright pink and cream. When the case was first constructed, the vivid colours would have complimented the porcelain inside, but over time with exposure to light and air, the wood oxidises and the colours fade. Matching the new tulipwood to the old required the implementation of traditional furniture restoration techniques. In some treatments, when losses are small, it is often possible to use a lighter coloured species of wood and colour it to match. But with the losses so extensive on the Garrick case this was not possible due to the difference in grain pattern that would have been readily apparent. New tulipwood, bleached to match the faded original, was required to fill the losses.

Bleaching can be an involved and tricky process: too much and you lose all the colour of the wood. After some experimentation, a process was refined to match the colouring on the case. Dilute nitric acid solution was applied, oxidising the pink stripes to a dark brown. After that, application of a two-part bleach, consisting of sodium hydroxide and hydrogen peroxide, lightened the brown stripes to a more mellow orange. By rinsing the wood with liberal quantities of dilute acetic acid solution, any remaining sodium hydroxide was neutralised prior to finally rinsing the veneers thoroughly in water and clamping in a press to allow them to dry flat. 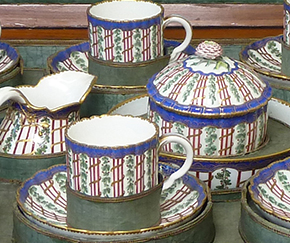 Having completed this process, the veneers were finished to match the original surface in order to minimise in-situ colour matching and varnishing. Shellac resin dissolved in alcohol is often the quickest way to build up a polished surface on new wood and has been used extensively by practitioners in the past. The resin is only suitable for new wood as its solubility parameter is similar to original natural resin coatings and the more refined grades are photochemically unstable. In this instance a less refined ‘seed lac’ was applied: this will still yellow over time, but to a lesser extent and, in the context of a yellow-brown substrate and good museum conditions, the effect is likely to be unnoticeable.

A wide selection of veneers was prepared for the replacement of around sixty losses and the bulk of the treatment time was taken up by making paper templates of the losses and cutting veneers with a piercing saw. For adhering the veneers, hot animal glue was thought to be the most appropriate. Inside the case, a minimal treatment was required to secure an area of loose braid and vacuum clean the silk lining. Due to the loss of one brass handle, a two-part silicone rubber mould from the original handle was prepared from which a wax cast was made and sent to a foundry for lost wax casting. The replacement is stamped with the current date so as not to be confused with the original. The tea service will be going on display in the V&A’s forthcoming Europe 1600–1800 galleries (Figure 2).

I am grateful to the Garrick Club Charitable Trust for their generous funding and Dr. Tessa Murdoch for supporting the project.