The FuturePlan project to conserve and display the original stained glass panels from the four windows on the staircase landings leading to the Lydia and Manfred Gorvy Lecture Theatre officially began in early 2012. The stained glass was designed and painted by William Bell Scott from 1867 to 1869 (the area was opened in 1868). Scott was a poet, writer and artist, producing paintings, etchings and engravings. Each window consists of 6 large panels of glass measuring around 1.3M high by 0.85M wide each. The two windows on the western staircase represent classical subjects: Pygmalion at the moment of the statue’s waking into life; Vulcan forging the bolts of Jove with Venus and Cupid looking on; Ceres teaching Triptolemus the use of the plough (no longer existent); and Orpheus charming the beasts with his music (Figure 1). The two windows on the Eastern staircase represent incidents in the lives of Giotto and Raphael: Cimabue discovering Giotto as a shepherd drawing on a flat stone; Giotto painting in the Arena Chapel at Padua with Dante looking on; Raphael as a boy working out the small picture of St. Michael in Perugino’s atelier; and Raphael taking the famous portrait of Pope Julius (Figure 2). Unfortunately, changing tastes led to these stained glass panels being removed and replaced with clear glass around 1910-13. 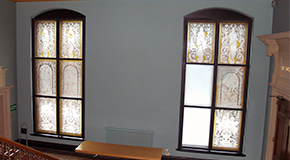 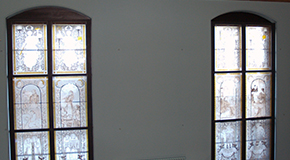 Around 100 years later, a request for assistance was received from the team of museum technicians responsible for decanting one of our off-site stores. Six crates of unmarked stained glass had been discovered in the store and they needed to be unpacked, assessed and identified so that decisions about their future could be made. I visited the store in early 2011 to photograph and assess the stained glass panels so I would be able to produce condition reports, propose any treatment necessary to stabilise the panels, advise how the panels should be packed in preparation for their relocation, and determine how best to store the panels going forward. The panels also needed to be identified since no Museum reference numbers were marked on the crates. 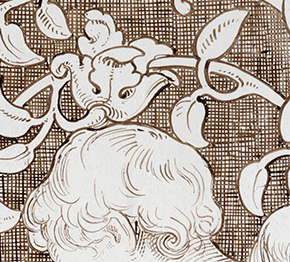 Twenty-three panels of painted and stained glass and one panel of acid-etched glass were removed from the crates. The distinctive painting style, carried out on glass with a finely-reeded texture on the back, was recognised as being the same as that used in windows created by William Bell Scott for our old Ceramic Galleries (now the Whiteley Silver Galleries). Research later confirmed that Scott had designed and made these panels for the windows on the staircase landings, which are visible from the Whiteley Silver Galleries. Upon further examination, it was discovered that two of the panels were full-sized samples and not part of the original glazing scheme. Both samples contained identical imagery (a variation of one of the emblematic figures) but only one had been painted and stained like the rest of the panels. The other sample had been produced by using hydrofluoric acid to etch the imagery onto the surface of a non-textured transparent piece of glass.

Once the placement of the 22 original panels within the original glazing scheme was established, it was apparent that two panels were missing from the right window of the Western staircase landing. Thankfully, the remaining panels were in fairly good condition. All required cleaning on both sides to remove surface accretions and some also required treatment to repair breaks and replace missing areas of glass. The conservation for this project was outsourced to accredited studio Chapel Studio Stained Glass Ltd. because the Museum did not have enough spare capacity to programme in the work within the desired timeframe.

Deciding how to deal with the replacement of missing areas and the two missing panels was the most challenging aspect of the conservation treatment. Despite extensive research, no designs, drawings or photographs of the panels have been found. Given that there was no evidence of the missing imagery, the Museum opted to take an honest approach so it would be immediately obvious which areas and panels were not original. This is why the yellow, silver stained decoration was not added to the external borders of the replacement pieces and cross-hatching was not added to their backgrounds (Figure 3). The only imagery that we definitely knew would have been in the two missing panels was the external border, therefore, it was decided that a plain painted border (without silver stain) would be the only imagery reproduced on the two new panels. 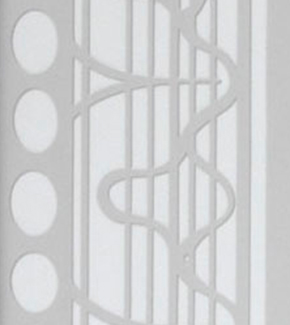 The original glass was identified as Hartley’s ridged glass (also known as Hartley’s Rolled Plate or Hartley’s Patent Rough Plate), which was patented in the 1840s-50s and produced until 1910-20. Unfortunately no modern equivalent of this glass, once commonly used to glaze industrial buildings and the roofs of Victorian railway stations, exists today. Neither the budget nor the programme allowed for bespoke glass to be made for this project because the start-up costs and time required to prepare a production line are considerable. Several samples of modern reeded glass (a semi-obscure glass with vertical ridges) were considered and the one with the narrowest reeds was selected for use in making the new painted replacements and missing panels; however, it was later discovered that it was not manufactured in large enough sheet sizes for making the replacement panels. Fortunately, the acid-etched sample panel offered an alternative solution. Scott had used a non-textured, transparent glass for this panel and created the imagery, plus desired level of obscurity, by acid-etching the glass. Selecting this combination of glass and decorative technique for the two missing panels would meet our requirements while using a solution provided by the artist himself (Figure 4).

Finally, new bespoke metal display frames were designed to allow the panels to be displayed in front of the existing windows. The frames were manufactured and installed by historic window and metalwork specialists ‘Fabco Sanctuary’. Acting as Lead Conservator on this project has been especially rewarding and it is such a pleasure to see these panels on display.

These windows have been restored thanks to the support of the American Friends of the V&A through the generosity of Lydia and Manfred Gorvy.

The conservation of historical stained glass windows at the V&A is being completed in several stages. This project has received further support from the Stained Glass Appeal 2012.