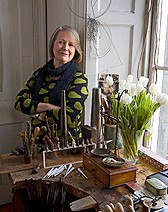 I peer through the doors of the sparkling new residency studio in the V&A’s Sackler Centre for arts education, where artist Dorothy Hogg is working. Dorothy, a jeweller and metalworker, was awarded a six-month residency here, and has made it her mission to create an inviting workspace. Images of her jewellery line the walls and real examples stand out in cases and on boards, revealing her processes and current work. Examples of workshop booty are pinned up on the wall, alongside explanations of past and future projects linked to Dorothy’s residency at the Museum.

‘This came at a good time for me’ Dorothy says. She recently retired from her post as head of the Silversmithing and Jewellery Department at Edinburgh College of Art, where she had been since 1985. Official retirement has enabled her to take up opportunities such as this residency, utterly breaking away from her normal routines, environment and ways of working.

Dorothy is internationally recognised as a teacher and as an artist. ‘I’m a teacher. That’s what I do,’ she explains. I don’t have to ask much as Dorothy talks me through her work, anticipating my questions, revealing her thoughts and directions, and asking for my opinions.

Dorothy’s CV reveals a lifetime of success as a world-renowned maker. In 2001 Dorothy was awarded an MBE for services to Jewellery and Silversmithing. Throughout her life, Dorothy has juggled home, teaching and her own creative practice, also finding time to curate exhibitions, sit on educational and craft boards, and promote Scottish Jewellery across the world, by curating exhibitions, for example the two incarnations of the internationally touring exhibition of Scottish jewellery and silversmithing 100% Proof in 2001 and 2006; and by her support of exhibitions such as Silver of the Stars. This was an internationally touring exhibition of work made in Scotland in collaboration with Scottish celebrities. It came to the V&A in 2007.

Dorothy leads me through a brief history of her jewellery and working processes. She shows me a case she calls her ‘Jewellery Sketchbook’: a beautiful display of three-dimensional ideas; trial runs of techniques and designs. ‘Artists have sketchbooks,’ she remarks, ‘but I wanted to show visitors how metalworkers work’. Dorothy makes sketches in a book, and then, before creating a piece of work, will often trial pieces of her design by making a model or three-dimensional ‘sketch’. This case reveals Dorothy’s interest in the minute details of each object as well as highlighting her technical abilities. She likes to try making parts of an object to see how they work. She is fascinated by craft processes. 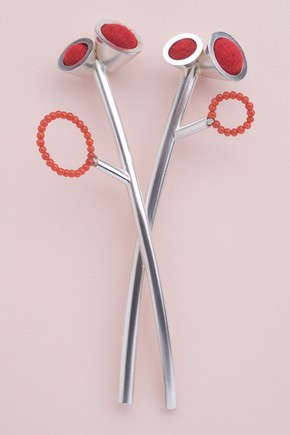 The direction Dorothy’s work takes expresses ideas which relate form to the human body. The sources for these formal interactions spring from a fusion of the subconscious with her visual experience. She explains that while she is at the V&A, she is not looking for inspiration but for a resonance with objects.

For Dorothy, design is a process of combining her ideas, influences and interests with what is happening internally. She points out examples of her early work of the 1960s and ‘70s which are very angular. ‘I think this style shows that I was quite stressed then,’ she considers. Dorothy is clearly aligned to the world of contemporary jewellery in which objects express an artist’s response to the world. This is in contrast to more traditional or commercial jewellery-making, where the maker’s personality is hidden beneath conventional designs which often function to highlight the wealth and status of the owner.

In the 1960s Dorothy used enamel frequently, often the translucent plique-à-jour enamel. She liked the way that when a particular plique-à-jour enamelled ring was worn, light cast coloured shadows onto the skin. In the 1970s though, to use a Scottish term, she ‘scunnered herself [became tired] of enamelling’. The process of grinding paste and producing enamelled angular shapes became too burdensome, Dorothy explains.‘But who knows, I may go back to it’.

A later series of work shows Dorothy’s strong interest in the inherent versatility of a piece of jewellery. ‘Spirit Level’ is a series of jewellery that incorporates delicate metal loops that slide along silver bars. Dorothy likes the way that the jewellery changes depending on who wears it and how it is worn. A lot depends on the wearer, but of course Dorothy can’t predict who will wear each piece. ‘You can only make them for you and see what happens’.

‘I’m pretty obsessed with hollow forms’ Dorothy confesses, talking of her more recent work in particular. She makes thin oval tubes of silver, shaping them to her designs. They are organic, flowing forms. ‘I’ve noticed there is often a tension between lines or forms moving in opposite directions in my work’. Proportion is very important. Aiming at something beyond the aesthetic, Dorothy is not only creating ‘something that looks nice – there’s a kind of private language going on’. 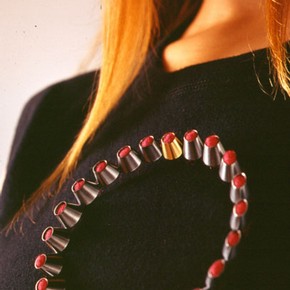 Dorothy uses colour too. In this recent tubular collection, entitled the ‘Artery Series’ and incorporating pieces such as ‘Memento Mori’, she uses red felt. ‘Not because I like the colour red, but because it is important to use red for its symbolic value’. She used red beads for the neckpiece in the Artery series commissioned for Birmingham Museum and Art Gallery’s collection.

In this piece it looks as though the beads are simply and deftly embedded in the silver cone-shaped openings of the neckpiece. In fact the technical detail involved in internally fixing the beads in place by means of a basket structure attached to a handmade spring is incredible. Dorothy is a meticulous metalworker, and her patience and skill are manifest.

The residency at the V&A has given Dorothy extensive access to the Museum’s collections. She explains that she is not always interested in the historical dates and details of pieces of the jewellery collection, as much as their aesthetic and technical qualities. She is visually moved.  When ‘devouring the collection’, as she puts it, she was drawn to objects such as a plain ring. ‘It was a very simple ring of lovely proportion but it had changed dimension by being worn. You could see it had a history’. Dorothy is interested in the stories that objects can tell.

Dorothy looks at objects through maker’s eyes. Another piece that caught her eye was a seed pearl necklace (right) strung together with horsehair. In this case she was intrigued by the messy patterns that the knots created at the back of the necklace. 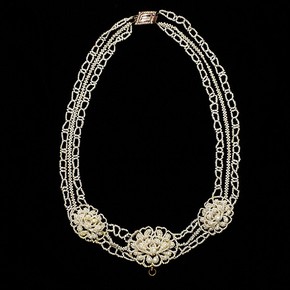 Dorothy is not intending to emulate these pieces but is fascinated by their design and how they were made. She finds enormous pleasure in looking closely at objects.

Since being at the V&A Dorothy has left behind her Edinburgh studio equipped with everything she needs as a silversmith. In the Museum flames are restricted, making annealing and soldering metal impossible, and so Dorothy has been in her words ‘liberated’ during this period to make work using materials other than metal. As metalworking is such a measured process, this break has given Dorothy an opportunity to experiment and ‘loosen up, be a bit random’, even if only temporarily. At the moment she is busy creating ‘Sackler jewels’ as she calls them, delicately sewn out of discarded plastic packing materials. She found plastic tubing from the new Sackler Centre chairs discarded in a skip outside the Museum, and carried them up to her workshop to experiment.

Using recycled materials works well within the framework of the residency and the outreach work she does. They are easily accessible and don’t necessarily require any special skills to transform them. Dorothy wants to increase access to the processes and techniques of jewellery making. She wants to encourage people to recognise the potential of materials they find. ‘Things can look amazing without doing much to them’, Dorothy comments as she drapes a fragile piece of netting around her neck, suddenly transforming it into an elegant choker.

Dorothy has a blog on the V&A website that she calls Jewellery Resonances. It contains a wealth of information about her and the residency. Dorothy aims to use it to encourage people both to use recycled materials and to transform unlikely materials for Jewellery making. She would like website visitors to ‘find, make and wear’ and send in a photograph.

Despite the fact that Dorothy can’t use a large flame, she is still using metal in the workshop. She has to employ simpler techniques, which in any case are easier for the public to work with. In a recent three-day workshop with wire, Dorothy encouraged her students to experiment, investigating linking and chain techniques to create decorative structures, chain mail, and knitted structures in wire, trapping and attaching objects to create their own pieces.

Workshops play a large part in the residency. For the official opening of the Sackler centre on the weekend of 26-9 October 2008, Dorothy is going to run an activity for 4,000 visitors called the ‘Chain of Talent’ project. An oversize chain will be suspended through part of the Museum and visitors will be invited to make a charm to add to this ‘charm bracelet chain of talent’. 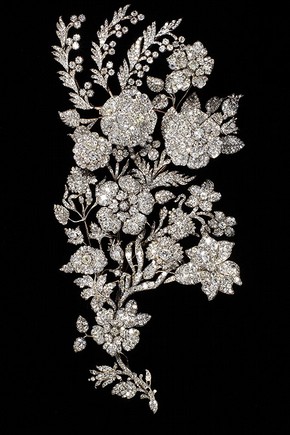 For another workshop, Dorothy was inspired by Lady Cory’s corsage ornament (right), a star piece in the V&A’s William and Judith Bollinger Jewellery Gallery. It is an enormous nineteenth-century bodice ornament in the form of a bouquet, encrusted with diamonds on springs that tremble elegantly with the movement of the wearer. I can see that Dorothy is interested in how this piece of jewellery changes in sync with the wearer’s movements. Dorothy recognises the potential of this quivering jewellery and how it could be applied to a project for school children. They will develop designs for brooches and door plaques, and the separate elements of the designs will tremble on small springs. Some examples are pinned to her wall, demonstrating the impressive effects achieved with basic materials. It must be great fun too.

Since the residency is supported by the Crafts Council, as well as running workshops and making her own work, Dorothy is involved with various creative mentoring schemes for emerging crafts people, run by the Crafts Council and Cockpit Arts. She is also involved with the organisation Innovative Craft , an initiative led by Amanda Game to develop events and exhibitions that will highlight excellence, achievement and innovation in craft.

The residency at the V&A is certainly wide ranging, and has exploited Dorothy’s skills as both an artist and teacher. She has proven her versatility and creativity in adapting to new materials and techniques, and what is conveyed in our brief meeting is how well Dorothy can gauge people’s interests and enthuse them about jewellery. In just an hour she has opened my mind – and I want to learn more.

Where will the residency lead Dorothy? She has immediate plans. She will be showing her work at Goldsmiths’ Hall, London, in May 2009 and is currently curating an exhibition at Contemporary Applied Arts (CAA Gallery, London) to open in June 2009. Dorothy has enjoyed her time at the V&A and feels that for her, ‘a door has been opened to a new set of visual experiences and opportunities’. I am looking forward to seeing what comes next.