Filling a Gap: Recent acquisitions of turned wood at the V&A 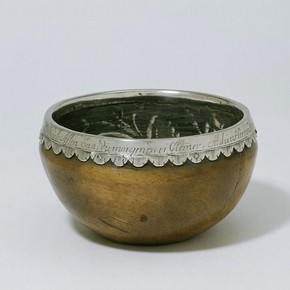 Until very recently, the V&A has made little effort to represent the art of wood turning in its collection. The discipline involves shaping wood on a lathe, and often altering it through carving or other techniques. This gap in the collection has been redressed recently through a curatorial initiative, which has resulted in the acquisition of a small but important group of key works. This article explains the reasons for the relative neglect of wood turning in previous years, and also describes some of the recently acquired objects.

The V&A has a curatorial structure that is mostly based upon certain clearly defined media: ceramics and glass; furniture, textiles and fashion; metalwork; works on paper. (1) This structure permits the staff to develop unrivalled expertise within their subject areas, but it also leaves accidental gaps in collecting. Most notable in this regard is the museum's relative neglect of industrial design in the 20th century. The institution has never had a curator for plastic, for example, or rubber; or for that matter, vehicles or lighting. While there have been fitful attempts to redress this problem - through concerted collecting of radios and automotive design drawings, for example - only this year has the V&A appointed its first curator of product design. (She is Jana Scholze, and also looks after 20th century furniture.) The collecting of digital design has also commenced only very recently, with the addition of an exciting group of early works in the medium to the museum's holdings. 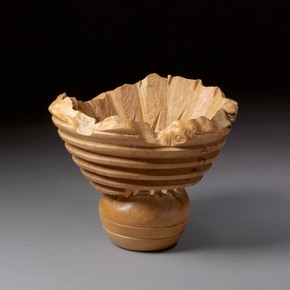 One of the less obvious omissions from the collection is the craft of turned wood: objects made on a lathe. Of course the collection has an enormous compilation of furniture that was made using turning, but until recently there were almost no lathe-turned objects in the V&A. The reason is simple: no one was in charge of that. Because they are usually vessels, turned objects are not the obvious province of the furniture and sculpture departments; and because they are typically made of wood (or occasionally ivory, alabaster, or other materials), they also fall outside the remit of the Ceramics and Glass and Metalwork departments. The result was that there were a few early pieces of treen in the collection (fig. 1). Alongside pewter, these wooden plates and bowls formed the everyday tableware of the lower and middling sorts until the expansion of ceramic production in the eighteenth century. But the V&A had virtually no examples of the contemporary revival of wood turning, which has been one of the key crafts within the studio movement since the 1940s.

The embrace of the lathe as an artistic tool had a promising start. Such figures as Bob Stocksdale learned from the modernist design of the postwar years, combining clean profiles with a deep understanding of their material. But things really got going in the 1970s, with the arrival on the scene of Mark Lindquist and David Ellsworth - two unusually creative turners, both of whom were fired by expressive innovations in ceramics. An infrastructure for the craft also developed rapidly, mostly thanks to the efforts of Albert Le Coff, a former turner who founded the Wood Turning Center in Philadelphia. Through exhibitions, collecting, and publications, Le Coff and his colleagues shone a spotlight on the progress of American turning, and also forged connections to activities elsewhere in the world. 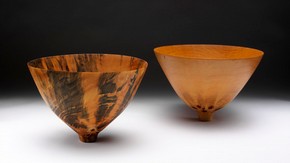 When I arrived at the museum four years ago, I was surprised that this story of rapid growth had not had any impact on the V&A's collection. I had a strong interest in the medium as a result of a major survey exhibition that I helped to curate in 2003 (Wood Turning in North America Since 1930, co-organized by the Wood Turning Center and the Yale University Art Gallery). With the approval of the furniture department, I set about trying to fill this gap.

This has proved to be remarkably easy as collecting initiatives go, due to the generosity of a small group of American collectors and gallerists. From Rakova Brecker Gallery, based in Florida, came a major work by one of America's most accomplished wood artists, the aforementioned Mark Lindquist. Entitled 'So Long Frank Lloyd Wright', a nod to the Simon and Garfunkel song of the same name, the piece also refers to the great architect's design for the Solomon Guggenheim Museum in New York (fig. 2). Technically, the piece is important within Lindquist's career, as it was the first piece that he carved using a computer-driver router. This was how the deep spiral was cut into the vessel's exterior. 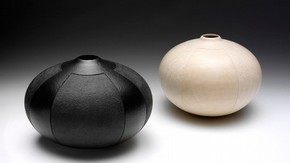 Figure 4 - Black and White Pair of Vessels, John Jordan, Tennessee, USA, 2001. Turned and carved dyed box elder. Museum no. LOAN:AMERICANFRIENDS.519-2007. Loaned by the American Friends of the V&A through the generosity of Martha Connell and the Connell Gallery

The inside of the piece features a more long-standing technique usedby Lindquist, a series of textural cuts made by plunging a chainsaw into the wood at regular intervals - a contemporary updating of the precision effects achieved using indexed ornamental lathes in the eighteenth and nineteenth centuries.

Martha Connell, a gallerist based in Atlanta, donated to the V&A two fascinating pairs of objects by the turners Ron Kent and John Jordan. Both craftsmen can be considered formalists. They first create classical shapes on the lathe, and then use post-turning techniques to enrich the surface quality of the objects. Their means of doing so could hardly be more different, though. Kent works in Hawaii, and is known for his use of a distinctive wood that grows there called Norfolk Island Pine (fig. 3). When soaked in oil, this timber achieves a translucency when held under a strong light. The frequent punctuation of the wood with knots and streaks of spalting (a staining created by fungus) give the finished vessels a strong graphic quality. Jordan's post-lathe work is more craftsmanlike, involving the painstaking texturing of the surface with carving tool (fig. 4). He often paints his vessels black and white, discarding the natural colour and figure of the wood in favour of a starker effect. 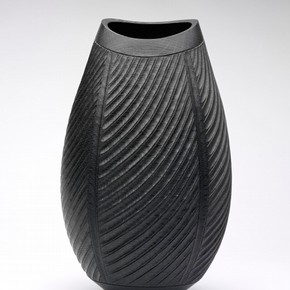 Jordan's work compares closely to another recent gift to the V&A, a stately vessel by the Irish turner Liam Flynn (fig. 5). Like Jordan, he often carves and paints his works after turning the forms, which are distinguished by a signature 'double rim' that creates a sense of expansive interior volume.

Without question however, the major recent gift to the V&A in this area has been made by Robyn and John Horn of Little Rock, Arkansas. They have donated a body of intelligently chosen works that mark key stages within the career of nine leading turners from America and Britain: Stocksdale, Ellsworth, Todd Hoyer, Ray Key, Stoney Lamar, Michael Peterson, Hayley Smith, Al Stirt, and Robyn Horn herself.

Of the group, the vessel by Ellsworth is a particular treasure: a rare example of one of the artist's early 'hollow turnings' (fig. 6). These works resulted from a major technical innovation - perhaps the first real quantum leap in technique that occurred in 20th century studio turning. At first, they present something of a ship-in-a-bottle conundrum: how are they made? The wood must be mounted on a lathe, its outside profile shaped, and then the interior gradually shaved away, leaving only an astoundingly thin and light balloon of wood. 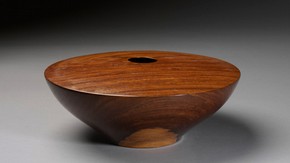 To achieve this Ellsworth devised a turning tool with a long, bent shaft, and a cutting edge mounted on one end. By using a series of these with different curvatures, he found that he could carve very steep curves without breaking through the vessel wall. The nearly horizontal top of this piece, and its sharply breaking corner, are to the trained eye a sort of daredevil performance in craftsmanship.

Also of particular note in the group are the two pieces by Horn, which chart her development from a mostly turned, minimal formal language to an explosive compositional approach achieved mainly through free carving (fig. 7), (fig 8). The earlier 'Geode' is perfectly symmetrical, apart from the off-center division between heartwood and sapwood which gives the piece a sense of dynamism, while the later work is a fragmentary composition suggesting the sets from The Cabinet of Dr. Caligari. 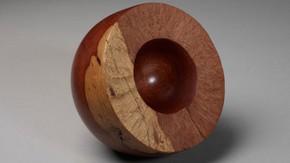 While Horn has still exploited the wood's natural properties, leaving an area of natural sub-cambium surface at the bottom and a bit of natural edge (highlighted by the shift to sapwood) at the top, she has also intervened with a great deal of carving. The only turned element of the piece is the shallow depression at the center, a distant memory of the bowl-like logic of her early works.

These recent gifts to the V&A constitute a core of material which, if not a comprehensive account of this craft's development over the past few decades, at least give a sense of the many possibilities afforded by the disarmingly simple means of the wood turner. Hopefully the group will be supplemented by further gifts in the near future. In the meantime, some of the works discussed in this article can be seen on view in the newly reopened 20th Century Design gallery, alongside ceramics, furniture, textiles, and even a plastic radio or two. 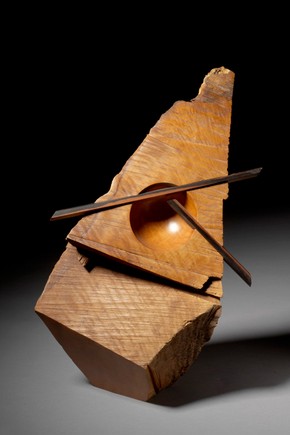 As Scholze's appointment as curator of product design suggests, the V&A is now actively trying to fill the inadvertent gaps in its collection. New cross-departmental curatorial groups, which bring together specialists from across the museum according to period expertise, will no doubt be a help in this regard.

Of course the process of building a truly comprehensive collection will always be an unfinished project. As Craig Clunas, formerly the curator of Chinese art at the V&A, once remarked to me, the problem with filling a gap with an object is that you create two new gaps on either side of it. This is certainly the case with wood turning; the gifts we have received to date represent only a few of the great names and ideas in the field. But it's an encouraging start.

(1) Works on paper include prints, drawings, and photographs, all of which are housed in the Word and Image Department alongside paintings and books. Exceptions to the medium-based rule are the Sculpture and Asian Departments. The curators in the latter department cross over all materials within a given geographic area - the logic being that cultural and linguistic expertise are more vital in this area of the museum's collecting than materials-based connoisseurship.