Review: The Children's Book by A S Byatt 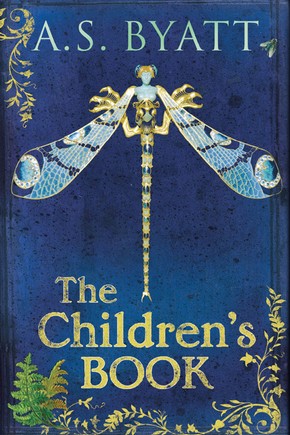 The Children's Book by A S Byatt

The V&A has long been associated with the Booker Prize, not least through its growing collection of bindings from title-winning novels. Never before, however, has the museum itself played such a starring role in the narrative of a short-listed work. Set in Edwardian England, an era of social and political upheaval, and a transitional moment in the museum's history, AS Byatt's 'The Children's Book' resonates with current developments at the V&A (fig.1 ). Largely unchanged since the building was completed in 1909 (an epic project discussed in the novel), the first phase of revamped ceramics galleries opened in autumn 2009. At this exciting time for the ceramics collections, it is particularly fitting that clay and glazes, modelling and remodelling, should become such powerful metaphors, and pots such deep vessels of meaning, in Byatt's latest offering.

Discovered camping out in the bowels of the museum at the outset of the novel, Phillip Warren, poor boy and aspiring potter, is whisked away by the keeper of precious metals to be tutored under the morose and explosive ceramicist Benedict Fludd. Introduced to Byatt's cast of characters at a glittering Midsummer party, both Phillip and the reader cast eyes over a bucolic scene of country house life at the close of the nineteenth century. Hosted by the beautiful Olive Wellwood, writer of children's tales, and with entertainment provided by puppet master Anselm Stern, the dazzle of the occasion, like all good fairy stories, conceals a much darker set of circumstances. 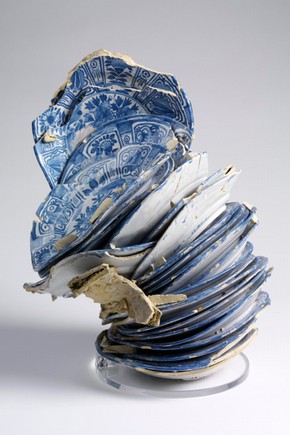 Figure 2 - Kiln Waster, Delft, Holland, 1640-1660. Tin-glazed earthenware with fragments of fire-resistant clay. Museum no. C.10-2005. A pile of 34 blue-and-white decorated earthenware plates in Chinese 'transitional style' which have collapsed during firing, causing them to deform and fuse together. Attached to it are fragments of the fire-clay kiln-furniture which supported the plates for firing.

Byatt's deft handling of the personal and the political, the social and the psychic, creates a richly textured novel. Plays, puppet shows, and fairytales are woven skilfully into a scholarly narrative, exploiting the magnetism of the real and the allure of the imaginary. With its contrasts of light and darkness, vivid prose and shadowy, sometimes frightening goings-on, the novel exhibits the hallmarks of the fairytale, rooted in the heartbreaking reality of history and human fallibility. The sins of the fathers (and mothers) bear heavily on the narrative. For this is the children's book, tracing the younger generation as they negotiate a shifting cultural landscape (inhabited by Anarchists, flawed Fabians and marauding women), and as their identities are shaped, like clay from the earth, by both internal and external vicissitudes (fig. 2 ).

Early on, Fludd's violent words of warning to Phillip Warren are more than a little prophetic, gaining greater significance as the novel progresses and the world into which the children enter becomes ever more uncertain: 'You are subject to the elements, he said. Any one of the four - earth, air, fire, water - can betray you and melt, or burst, or shatter - months of work into dust and ashes and spitting steam'. (p.131)

Byatt's use of language is strikingly visual, with beautifully evocative descriptions of ceramic objects. As an object itself, and in all its complexity, the book maintains a powerful and pleasing completeness. Like the underground vaults at the museum, the alchemy of layered glazes on Phillip Warren's pots, or the network of subterranean caves in Olive Wellwood's stories, 'The Children's Book' is immersive and spellbinding. Emerging, blinking into the light on finishing the novel, a good place to reflect might be rooms 140 to 146 at the V&A.