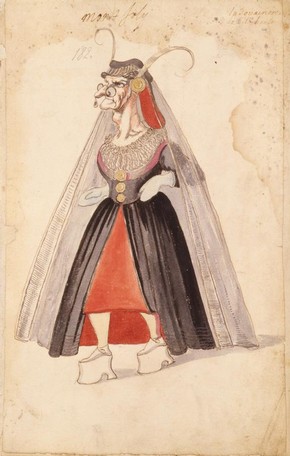 Dance in the 17th century

Ballet and opera began in the 17th century, with the elaborate spectacles devised at European courts. These were flamboyant entertainments used to celebrate marriages or show off the wealth and power of the ruler.

The performances were a mixture of spoken word, music, dance and pantomime. They contained ceremonial processions with spectacular technical effects and extravagant costumes. The stories were inspired by the myths of ancient Greece and Rome or were based on themes such as the four seasons, the natural world or foreign lands.

Costumes were imaginative and fantastical, decorated with symbols that helped the audience to recognise the characters in the story. Movement was often limited by the size of these costumes.

Originally the court ballets were performed by the aristocracy and royalty in the rooms and gardens of their palaces. Dances were based on the social dances of the royal courts with graceful arm and upper body movements and elaborate floor patterns. These huge spectacles helped keep courtiers amused - court life could be monotonous and boring, and being able to dance was a necessary social accomplishment.

King Louis XIV of France was by all accounts a passionate dancer. He was known as the Sun King. He had appeared as the Sun god, Apollo in Le Ballet de la Nuit (The Ballet of the Night), at the age of 15. 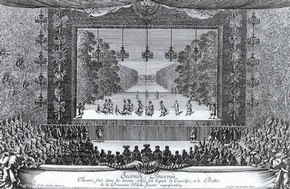 Apollo was the Greek god of peace and the arts. The Sun, a heavenly body which gave life to all things was seen as the perfect symbol for the young king. Eventually it became impossible for amateur dancers to reach the standards demanded by the dancing masters and composers. The two separate traditions of ballet and opera began to develop independently and in 1661 the Académie Royale de Danse, was established in France. Here the first professional theatre dancers were trained and dance moved from the court into the public theatres.

The ballet La Princesse d'Elide was part of a seven day fête held in May 1664 at the Palace of Versailles. The festivities celebrated the birth of a son to Louise de La Vallière, mistress of the French king, Louis XIV. 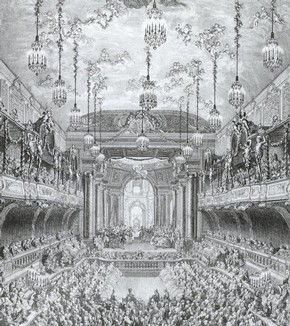 Versailles had no theatre, so temporary stages were set up around the palace and in the gardens. Here the stage has been set up in the grounds with the palace itself visible in the background. Such lavish celebrations helped impress foreign dignitaries and reinforced Louis' image as absolute ruler. Louis and his courtiers often took part and Louis' nickname, The Sun King, came from his performance as Apollo, the Greek god of the sun, in the Ballet de la Nuit in 1653. In some ways Louis' whole life was a performance, played out on the stage of Versailles: people even watched him get up in a morning and go to bed.

A comedy-ballet called the Princess of Navarrewas produced as part of the celebrations of a royal marriage: the King's son, the Dauphin, had become engaged to Maria Theresa of Spain. The composer Jean Philippe Rameau was asked to write the ballet in partnership with the author Voltaire (now best known for his satirical novels such as Candide). Voltaire found the commission a trial he had to write to a precise specification and everything he wrote was constantly checked by a number of officials. To make matters worse, he and the official in charge of the entertainment disagreed about everything. 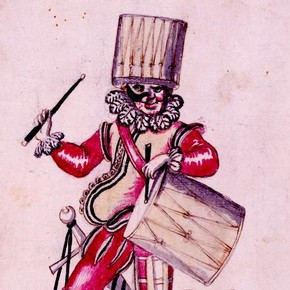 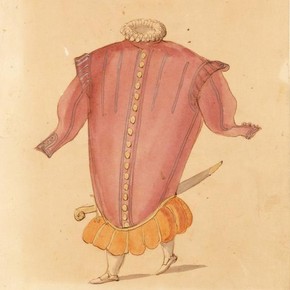 Dance in the 18th century

Following the French Revolution of 1789, women abandoned paniers and corsets for floating Grecian style dresses, which emphasised the body. Dancers followed fashion and these dresses meant they could perform a greater range of movement. They now wore flat slippers, which allowed greater flexibility in the foot, and women developed the trick of rising on tiptoe (on demi-pointe). Men’s costumes also reflected fashion and the tonnelet was replaced with a jacket and fitted breeches. Now that costumes had become freer, men and women could dance together. 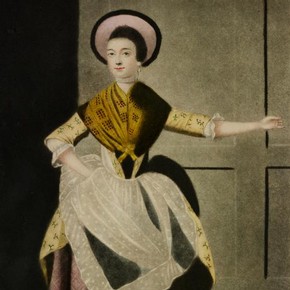 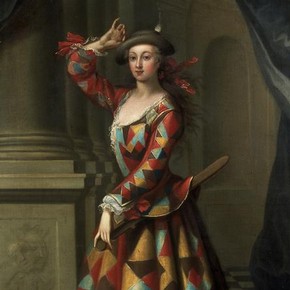 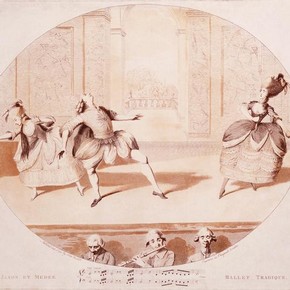 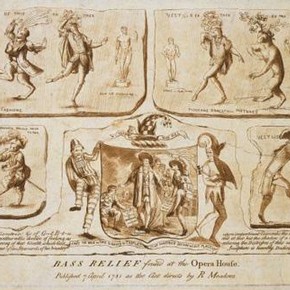 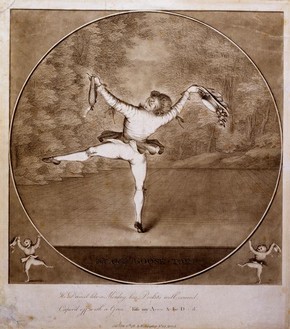 Marie-Jean Augustine Vestris was the son of the famous dancer Gaëtan Vestris. Many thought him the greater dancer – although as Gaëtan pointed out, he did have the benefit of having him, Gaëtan, as father 'an advantage Nature has denied me'.

Auguste was Gaëtan's pupil and made his debut in 1772 when he was 12. Ten years later he was star of the Paris Opéra and acclaimed throughout Europe. One spectator said that 'he rose towards the sky in such a prodigious manner that he was believed to have wings'.

The noble style in which Vestris' father excelled and the tonnelet, were out of fashion. In the 1780s, the simple jacket, shirt and breeches allowed greater virtuosity and a higher leg line. Not everyone approved. There were snide comments about performing monkeys and that a goose could stand on one leg too. The money in the hat and the scurrilous verse beneath refer to the large sums earned by Vestris at the height of his career. 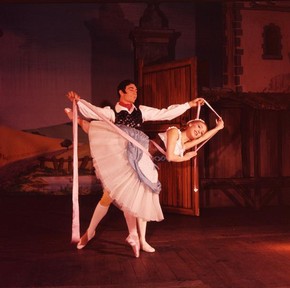 In the late 18th century ballet stories began to tell the lives of ordinary people rather than mythical heroes.

One of the best-known ballets from the 1790s is La Fille Mal Gardée. The original choreography is now forgotten but the ballet was re-choreographed by Frederick Ashton in the 1960s.

The ballet was originally conceived in 1789 by choreographer Jean Dauberval, while working at the theatre in Bordeaux, in France. He saw a print of a mother scolding her daughter while her lover escapes up the backstairs. His original choreography has not survived, but it was one of the first ballets to deal with 'real' people and their emotions rather than gods, heroes, and mythology.

The ballet is known by its French title as it is extremely difficult to translate into English – 'The Badly Guarded Daughter' hardly trips off the tongue. In Russia it was called Vain Precautions. 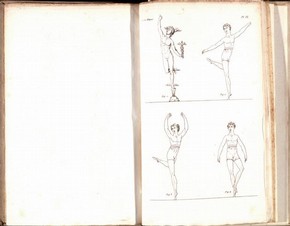 The Code of Terpsichore

In Milan Carlo Blasis produced the text book The Code of Terpsichore (Terpsichore was the Greek goddess of dance), a dance technique manual which includes many of the set exercises and steps that dancers still do in class today. It was Blasis who insisted on the 90 degree turnout from the hips. Until then 45 degree turnout had been the norm.

Carlo Blasis was born in Naples in 1797 and died in 1878. He studied dance in Milan with the great 18th-century teacher and choreographer Vigano and became the lead dancer in Milan. He also trained the most famous Italian dancers of the day, who went on to dance in St Petersburg, Paris and London, thereby spreading Blasis's influence throughout Europe.

Whereas 18th-century dance looks unfamiliar to our eyes, the illustrations in Blasis's book look like 'ballet'. His work laid the foundation for classical ballet in Russia and by extension ballet in the 20th century. The exercises and poses are familiar as part of every ballet class, from the child taking her first steps to the greatest ballerina. 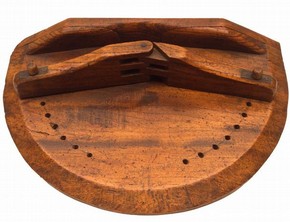 A 'tourne-hanche', literally a hip turner, was device used by dancing masters in the 18th and 19th centuries to train their pupils' feet into the correct turned out position required by ballet and social dance.

This 'turn-out' gives maximum flexibility to the leg and hip joint and allows the dancer to move in any direction. Turn-out is acquired over a long period of training by the thigh bone rotating in the hip socket. The problem was that this device encouraged the pupil to turn out from the knee and not from the hip, and could cause severe joint problems.

The shorter skirts and body-revealing costumes were considered vulgar by conservative audiences. The great British cartoonists satirised dance and dancers, revelling in and exploiting any scandalous behaviour. Rose Parisot, a very popular French dancer, was frequently drawn with one of her breasts uncovered. Whether her dress slipped by accident or design has never been established. 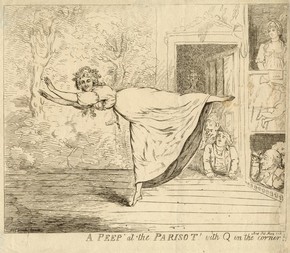 Print of A Peep at The Parisot, lithographic print, late 18th century

The filmy, scanty female fashions that followed the French Revolution were worn by dancers on stage, and this was still a cause of gossip and protest. Part of the appeal can be surmised from the man at the right, looking straight up the dancer's legs with his opera glasses. The Times called Mlle Parisot, 'a attitudinarian rather than a dancer' (taking up poses or attitudes was the fashion in France) but she was a popular favourite in London in the years following the French Revolution.

Her father, journalist Pierre-Germain Pariseau, had been guillotined during the terror after being mistaken for a royalist supporter of the same name. Prints and caricatures usually show her with one bare breast - probably a reference to her transparent costumes and, perhaps, a tendency to fall out of them.

In 1789 a group of visiting French dancers were condemned by the Bishop of Durham for being indecent. He felt their unseemly show of flesh would undermine British morals and rendering them ineffective in the war against Napoleon. 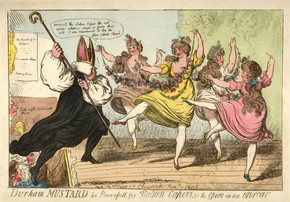 The ballets of Charles-Louis Didelot in 1796 were a huge critical success, but caused a sensational scandal because of the diaphanous, short, body-revealing dresses that were now worn by the dancers.

In 1798 the Bishop made a furious speech in the House of  Lords accusing contemporary society of loose morals. He blamed this corruption on the influence of Catholic France and spoke of 'the allurements of the most indecent attitudes, and the most wanton theatrical exhibitions' of the dancers at the King's Theatre. He was convinced that the French government had sent  the dancers over to 'taint and undermine the morals of our ingenuous youth' in a deliberate attempt to weaken Britain in preparation for invasion. The cartoonists had a field day.