London Design Festival at the V&A 2014

London Design Festival at the V&A 2014: Installations and Displays 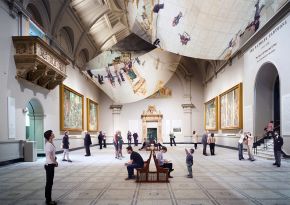 Fascinated by the themes of movement and the perception of space, multi-disciplinary designers Edward Barber & Jay Osgerby have devised an immersive, kinetic sculpture in conjunction with BMW that distorts the viewer's sense of perspective as they view the Raphael cartoons on display at the V&A, as well as the architecture of the very room they're standing in.

Two revolving reflective structures, suspended in the centre of the gallery, provide an ever-changing view, at once disorientating and captivating.

''The installation is intended to be a true experience," they say. "It will amaze the visitor and enable them to appreciate the space in a totally new way, the visitor becomes part of the room for a fleeting moment. Through movement and reflections, the static display of the paintings are brought to life while inviting the viewer and the gallery to be part of the performance.'' 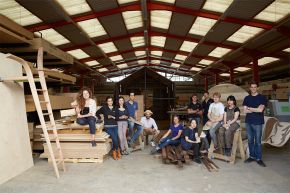 The Wish List: What I Have Always Wanted Is...

In a collaborative fusion of design experience, young talent and craftsmanship, Sir Terence Conran and Benchmark Furniture have teamed up with the American Hardwood Export Council (AHEC) to invite ten illustrious names in design and architecture to each nominate an emerging talent to collaborate on a very open brief:
"What have you always wanted in your home, but never been able to find?"

While open to interpretation, the one restriction is that each project must be produced in a single material – American hardwood. All of the items were crafted during one intense 'making week' at Benchmark's Berkshire workshops in July.

The resulting pieces are displayed on the Architecture Landing, and the staircase leading up to it from the Grand Entrance. The final object – a shed designed by Nathalie de Leval for Paul Smith – is displayed in the V&A's John Madejski Garden. 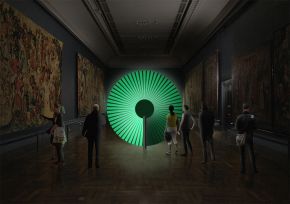 A large rotary machine sits centrally, hovering just off the gallery floor. As the face of the machine revolves it passes through a light source charging its surface, which emits this energy as afterglow. The continual revolution of the machine creates a perpetual ebb and flow of light patterns travelling across the structure.

Drawing from the individual expertise of the three designers, the installation is graphical in its visual impact, delicately engineered and crafted using both traditional and cutting edge materials. The result is a seemingly magical display that bewilders and delights the viewer, before leaving them to emerge, blinking and beguiled, into the daylight. 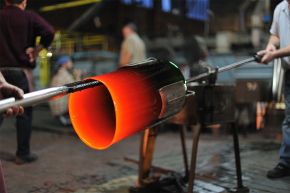 The entrance to the V&A's Glass Galleries will be transformed for the London Design Festival by a site specific work created by the Paris-based designer Jeremy Maxwell Wintrebert.

During a visit to Glashütte Lamberts in Waldsassen, Germany – one of the oldest mouth-blown glass factories in the world – Wintrebert was struck by the piles of freshly made glass cylinders, waiting to be flattened out to create panes of glass.

Taking inspiration from the Art Nouveau movement's attempts to "bring the beauty of nature back into our lives" and working in close collaboration with leading glass specialist Vessel Gallery and supporters Perrier-Jouët, Wintrebert's installation plays with the balance of light and form, as well as the paradoxical strength and fragility of glass. 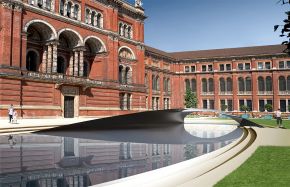 Crest, designed by Zaha Hadid Architects and commissioned by Meliã Hotels International, provides an engaging feature across the pool in the centre of the V&A’s John Madejski Garden. Crest is designed as a demountable sculpture to be installed as a permanent feature within the ME Hotel in Dubai, also designed by Zaha Hadid, which opens in 2016. The form explores the relationships between fluid and Cartesian, solid and void, surface and structure inherent within the hotel’s design.

Engineered with Buro Happold and manufactured by Litestructures, the shell-like structure was pre-stressed in order to be realised as thin as possible, assembled as a flat plate of aluminium which is then bent into shape in situ.

Hadid’s intention for Crest is that it should complete the pool as though it was always intended to be a part of the space. The title comes from the crest rising above the waves in the pool, creating a new peak and visual focal point within the courtyard   which is simultaneously in dialogue with the historic architectural environment as well as actively reflecting the movements within it, via the metallic surface which reflects the sky on one side and the rippling water on the underside. 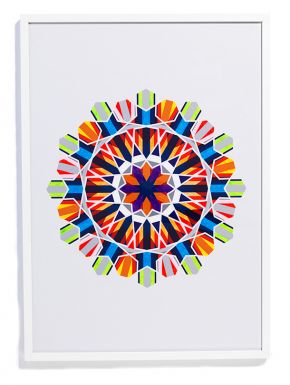 A collaboration between London-based print and design studio David David and British manufacturer Johnson Tiles, Carousel Wall sees the inside walls of the V&A’s Tunnel entrance covered in bold geometric shapes and bright shades for the London Design
Festival.

Visitors will be greeted by a dazzling display of pattern and colour as they walk through a 50m2  mural installation, made up of tiled ceramic panels displayed vertically on two walls of the tunnel. Based on an adaptation of Carousel (2011), the Jameel Prize-nominated artwork by David David co-founder David Saunders, the installation is inspired by Islamic geometrics interpreted through modern British production techniques. 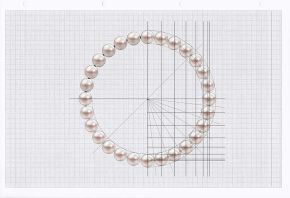 For the duration of London Design Festival at the V&A, Michael Anastassiades in collaboration with Flos will present the lighting installation Ama, made by mouth-blown opaline spheres and brass. The piece is an appreciation of the pearl diving mermaids of Japan.

The simple, even primitive beauty of these women who harvested seaweed, turban shells and abalone from beneath the coastal waters can be tracked 2000 years back in history, as recorded in the oldest Japanese anthology of poetry. Only equipped with visual acuity, lung capacity and a hunter’s instinct, Ama women would dive some 30 feet down in cold water, confronting minus zero conditions at times and only wearing a loincloth, in search of the goods lying on the ocean bed. The tides of change went almost unnoticed in the Ama community, which slowly lost the daily interaction with the marine web of life.

Ama 2014 is a tribute to the savage beauty of the last Ama women, still diving at the age of 90, as well as to the ones who were taken away by the 20th century events within the Japanese archipelago. 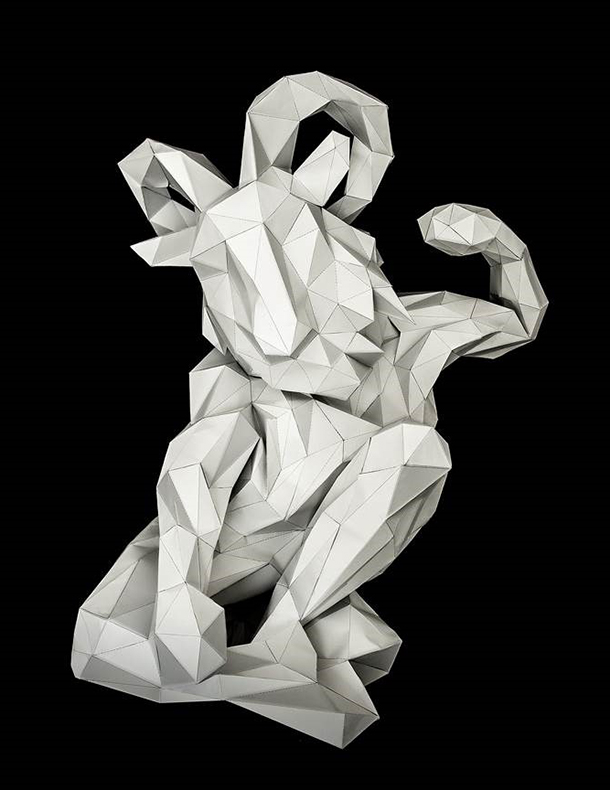 The T/Shirt Issue, a collective based in Berlin, have been in residence in the Museum for six months as part of a German design residency in collaboration with the Goethe-Institut London. Their fabric installations have been created from 3D scans taken from objects in the V&A’s collection and merged together to create unique hybrids.

See our events listings for details of when to visit The T/shirt Issue’s studio or participate in one of their digital workshops. 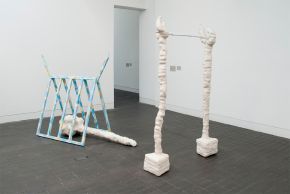 The current winner of the British Ceramics Biennial award, Nao Matsunaga uses ceramic, plaster, wood and paper to express various aspects of his subconscious. This installation references ceremonial obelisks and sculptures from the V&A’s collections that Nao has become interested in during his current ceramics residency here at the Museum.

See our events listings for details of when to visit Nao’s studio during the Festival. 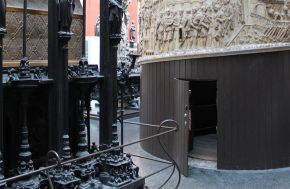 James Rigler is a contemporary ceramicist who creates sculptures and installations that question the architecture and meaning of the places around us. For the London Design Festival, James invites you to have the unique experience of stepping inside the top half of the V&A’s cast of Trajan’s column to discover what he has installed inside. James is represented by Marsden Woo Gallery and is a past V&A ceramicist in residence.

See our events listings for details of when to hear James talk about his work.

Sue Timney for West Dean at the V&A 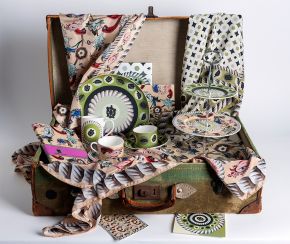 The V&A are the exclusive launch partner for this curated selection of fine bone china, silk cushions and silk scarves from Sue Timney’s new range of homewares and accessories for West Dean – inspired by its founder Edward James, his house and collection of Surrealist art and objects. Available for a limited period from the V&A Shop and the V&A Shop Online. 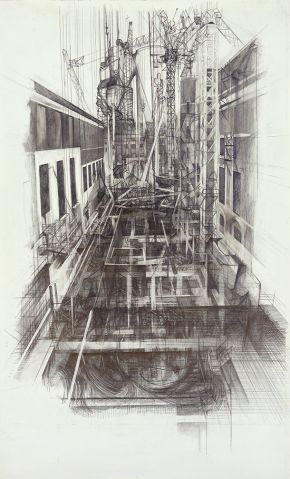 Much of Liam’s practice is centred around architecture and spaces in London. This moving image work installed in our architecture gallery layers 171 photographs, taken over the last eight years, of the dome of St Paul’s Cathedral from different angles around the city.

One of our current artists in residence, Liam is exploring the Museum’s Exhibition Road building site as an inspiration and a catalyst for work.

See our events listings for an opportunity to visit Liam’s studio and attend drawing workshops. 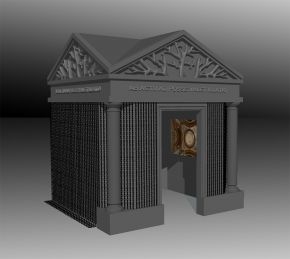 An immersive Sculptural 4k Video Art Installation by artist film maker VanessaJane Hall. Over 12 months the artist travelled England to create video canvasses that capture the raw beauty of the country house, whether sparkling or faded. The sculpture’s form was inspired by buildings researched and visited during the project.
Observers step inside the temple-like sculpture and find themselves cocooned in an immersive audio-visual environment. From sparkling halls to faded corridors, this three dimensional work takes the observer on an atmospheric journey that awakens the soul to the beauty and drama of these intriguing buildings.

Marking 40 years since the V&A’s ‘Destruction of the Country House' exhibition, the sculpture is presented alongside:

A display by architectural historian, author and conservationist Marcus Binney, who with John Harris, organised the 1974 exhibition for Roy Strong, then Director of the V&A. This new display, which is designed to echo the original exhibition's ‘Hall of Destruction’ presents a cascade of the finest lost country houses as well as highlighting the story of many others rescued from demolition and decay and adapted to sympathetic new uses. The display also looks back to the 1974 exhibition, its impact including massive press coverage which led to the founding of SAVE Britain’s Heritage, and a deeper national appreciation of the value these historic structures represent.