Masterpieces of Chinese Painting 700 - 1900: About the Exhibition 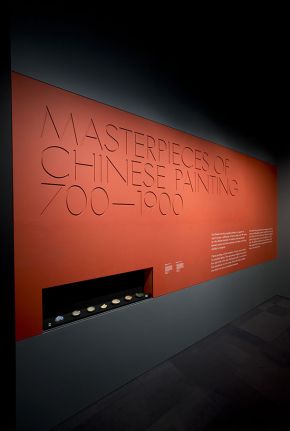 Presenting one of the world’s greatest artistic traditions, Masterpieces of Chinese Painting 700 - 1900 was a once-in-a-lifetime chance to see rare surviving works of art drawn from collections around the world. It featured over 70 of the finest examples of Chinese painting, from small-scale intimate works by monks and literati through to a 14-metre-long scroll painting, many of which were shown together for the first time.

Charting the evolving styles and subjects of painting over a 1200 year period, the exhibition included figure paintings on silk for religious sites, landscape painting and the introduction of Western influences. A significant number of these masterpieces had never been exhibited in the UK before, from banners, albums and scrolls created for a variety of settings to the materials that reveal the traditional process and techniques of painting on silk.

The exhibition began by exploring paintings made for religious purposes during the Tang and Five Dynasties periods. Most surviving works from this early period are Buddhist banners and screens, painted on silk and characterised by their bright colours.

This section looked at the growing enthusiasm for the natural world and the rise of landscape painting. Realistic observations of mountain and river scenes, plants and animals, fishermen and travellers, the cycle of the seasons, changing weather and the shifting qualities of natural light were all subjects favoured by artists. These compelling images of the real world also saw a shift to a more monochrome aesthetic. Monumental yet meticulously detailed landscapes were shown alongside intimate, poetic fan paintings.

The most striking innovations of this period came from groups of monks and scholars, who encapsulated painting, calligraphy and poetry within their works. These artists did not paint for official commissions but for private display instead. Under Mongol rule, many lived in reclusion and channelled their inner thoughts through contemplative works. Black ink on white paper became the medium for the aesthetic of solitude.

An artistic explosion took place in the stable and prosperous Ming dynasty, stimulating demand for painting from all levels of society. Many southern cities like Hangzhou, Nanjing and Suzhou became new centres for painting, and artists returned to working on silk and using expensive pigments to produce decorative pictures for seasonal, festive and auspicious occasions.

The final period in the exhibition 1600-1900 was divided into two themes.

Challenging the Past explored an age of artistic rivalry when painters competed with both their contemporaries and predecessors. Some were passionate students who identified themselves as heirs to the grand tradition of Chinese painting. Others re-imagined conventional subjects to prove their worth to the old masters.

Finally, Looking to the West examined the impact of European painting on China. European art and its techniques like linear perspective and chiaroscuro became increasingly influential in the 18th and 19th centuries. Fascination with European painting was not confined to the court. The availability of imported prints and illustrated books in major cities also exposed Chinese painters to previously unknown techniques and subject matter.

The Friends of the V&A

With additional thanks to Bruno Wang, and Sandy and Cecile Mactaggart