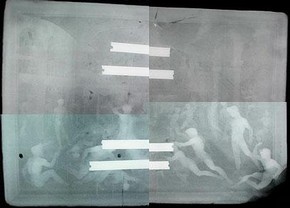 As part of the V&A's Medieval & Renaissance Galleries Project, a stucco panel (251-1876) by Francesco di Giorgio Martini was treated by Sculpture Conservation. This Sienese relief, dating from about 1474-80, depicts a scene of conflict (possibly Lycurgus and the Maenads), although it has long been described as an Allegory of Discord. The treatment was carried out before the relief was loaned to the National Gallery for the exhibition Renaissance Siena: Art for a City in 2007.

The surface and the structure of the panel were assessed under a binocular microscope; an X-ray mapping of the panel (Figure 1) was also carried out. The information collected, together with the historical documentation available, was vital for making a correct diagnosis of the panel's conservation needs. Moreover, it was possible to draw further conclusions regarding the material and technique of manufacture, which are fundamental for a better understanding of the object.

The relief has suffered significant losses, and there are two major breaks that divide the panel into three fragments. These breaks were repaired with plaster of Paris and, in addition, the central break was reinforced from the back with two flat, metal dowels, providing extra structural support.

The first documented evidence of a cast of this relief is a photograph, dated from 1897, found in a Catalogue of Plaster Casts by Brucciani & Co. This cast shows the central break suggesting that these repairs were carried out prior to this date. 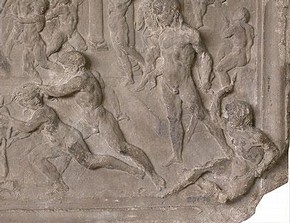 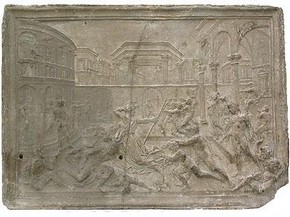 Before cleaning, the entire surface was obscured mainly by wax deposits, which appeared to have penetrated into the epidermis of the panel. There were also thick, dark deposits of wax located in the recesses and irregularities of the relief (Figure 2). These irregularities were caused by abrasion or by air bubbles formed during the original casting of the panel which now appear as tiny holes. The wax may have been applied to act as a releasing agent to facilitate the removal of the mould made to create the Brucciani casts. It would also have been used to hide imperfections and block voids to ensure a smooth casting. This application was probably carried out by Brucciani when the mould was produced.

After examination, the panel was assessed as structurally stable and therefore did not require any conservation treatment. However, the surface remained extremely dirty and required cleaning. Different techniques were used in order to recover, as much as possible, the original light tone of the stucco, as well as to emphasise the depth of the relief.

Initially the surface dirt was removed by dry cleaning with powdered rubber and rubber erasers of different grades (Figure 3). The wax makes the plaster surface stable and resilient to abrasions that could have otherwise occurred using this mechanical cleaning method.

The second step involved a chemical treatment to remove the thick, dark deposits of wax. White spirit, a non-polar solvent, was chosen in preference to a polar solvent, which would disrupt the gypsum in the stucco. The process, executed under a binocular microscope for more accuracy, involved softening the deposits with the solvent followed by its careful removal with a small scalpel blade. This operation had to be repeated several times and in rotation so the delicate stucco material under the wax would not be disturbed.

The areas underneath the removed thick deposits were much lighter than the surrounding areas. To even out the tonality of the panel, these areas were retouched with Gamblin Conservation Colours diluted in iso-propanol. These colours can be easily dissolved in low-polarity solvents and are very stable to light exposure.

Under magnification the stucco surface showed irregular particles of gypsum together with impurities, such as clay and soot, all typical characteristics of gypsum plasters produced in traditional kilns. What is more difficult to define is whether we are looking at a traditional stucco or just a traditional gypsum plaster. Further analyses would need to be carried out in the future in order to exclude the presence in the panel of key ingredients of traditional stucco mixtures (such as aggregates like fine sand or marble dust, and additives such as animal glue or resins).1

Tool marks and evidence of the texture of clay or wax can clearly be seen on the surface of the stucco, indicating that the very first model of the panel was probably made out of clay or wax.2  The relief may not have been a direct reproduction of this first model but certainly still carries the impressions made by tools during the modelling process.

There were no evident layers of plaster in the panel and air bubbles were present in areas of high relief. The X-ray images do not reveal any indications that the high relief features, such as heads, were added post casting. All these observations support the conjecture that the whole panel was produced from one single batch of gypsum plaster or stucco without any subsequent work. Therefore it may have been produced with either a piece mould or a flexible mould. These types of moulds would have allowed the creation of the panel in one single batch without the need of adding the high relief elements after the casting.  However, the earliest documented reference to flexible moulds made out of animal glue is in Biringuccio's treatise, De La Pirotechnia,3  published in 1540, much later than the manufacture date of the panel.

Finally, the X-ray images indicate the inclusion of a multitude of small air bubbles throughout the panel, which could suggests a quick, slightly careless casting process. Fast mixing and pouring of the plaster increases the presence of air in the mass. As the plaster sets, some of these air bubbles migrate to the surface where they cannot be released due to the surrounding mould. The presence of such excess of bubbles disrupting the fine surface details, could suggest that the relief was perhaps not intended as a piece for display. This cast could then have been produced to remain in Martini's studio either as a reference for future works, as a training tool for the apprentices in his workshop, or for use by others. However, the lack of detailed finish does not rule out the possibility that it was displayed as a work of art in its own right, particularly as a related piece survives in the Chigi Saracini Collection in Siena,4 and works in such modest materials were collected, even by the elite.

I am grateful to Peta Motture, Chief Curator on the Medieval & Renaissance Galleries Project, for her contribution towards this article.

3. Biringuccio, V., The Pirotechnia of Vannoccio Biringuccio: The Classic Sixteenth-Century Treatise on Metals and Metallurgy, translated from the Italian with an introduction and notes of Cyril Stanley Smith and Martha Teach Gnudi (Dover Publications, 1990), pp. 232-233