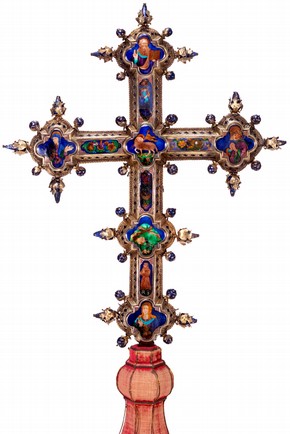 The re-display of a number of fourteenth- and fifteenth-century enamelled objects has given the Ceramics and Glass Conservation Studio the opportunity to assess a number of past treatment methods used on the degraded surface of enamels on metal.

An enamel on metal is made by applying layers of powdered coloured glass to a metal substrate where it is fused by heat. The stability of the enamel depends on its composition and the surrounding environment. An unstable glass formulation will allow soluble alkaline components in the glass to interact with moisture in the atmosphere causing chemical and physical changes to take place. Dissolved alkaline salts collect at the surface in the presence of moisture and grow as crystals when they dry out. These changes result in degradation ranging from a network of fine cracks (crizzling) to larger open cracks, a loss of translucency and areas where the enamel is no longer adhered to the substrate (flaking). This may be accompanied by corrosion on the metal substrate.

Deteriorated enamel surfaces were often coated with a barrier layer in the past; this appears to have been a common practice from the 1960s to the 1980s. The choice of coatings may differ but none have prevented further deterioration from occurring.

A silver-gilt altar cross (M.580-1910) ornamented with 22 translucent enamel plaques on a silver substrate (Figure 1) had been entirely coated with a thick plastic layer of polyurethane lacquer (Joy Glaze) in 1971. Not only did it obscure the surface quality of the enamel, but it also created a harmful microclimate promoting salt growth.

On arrival in the Studio in 2008, the coated enamels were in a poor condition. The enamel and underside of the coating were wet with deliquesced alkaline salts and the most severely degraded enamel resembled sugar granules. The unsightly coating was lifting from the surface pulling off flakes of deteriorated enamel with it (Figure 2). Although there is a risk of causing further disruption to the surface during the removal of a coating, in this case it was prompted by the immediate need to stem the active flaking and reveal the enamels. 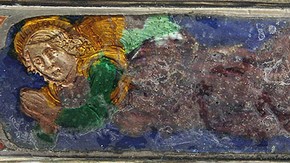 Figure 2. (M.580-1910) Detail of the coating as it lifts from a baisse taille enamel plaque (Photography by Fi Jordan) 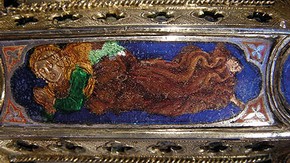 Under magnification, it was possible to lift the coating from the surface with the aid of a shaped wooden swab stick. Loose corrosion products were removed by aspiration with a miniature vacuum tweezer unit. Surface cleaning was undertaken in an attempt to slow the deterioration process by removing the alkaline salts where possible. The method involved lifting the soluble salts from the surface with a sable artist's brush. Firstly, absorbent paper was wet with deionised water and the brush wet from the paper to ensure that it was only slightly dampened. The cleaning process was repeated using a dry or almost dry brush and blotting paper to help absorb moisture. Consolidation was kept to a minimum. Paraloid™ B72 (ethyl methacrylate/methyl acrylate copolymer), (approximate 2% solution in acetone) was applied, by brush, to the most severely deteriorated enamel and to reattach flakes that had lifted with the coating (Figure 3).

Past records and present monitoring provide information on the direct effect of treatments on unstable enamels. A fourteenth-century silver-gilt processional cross decorated with translucent enamels (707-1884) has documentation from 1984, 1993 and 1996. It details the recoating, cleaning or localised consolidation with Paraloid B-72 in acetone. Since 1996, flaking has occurred on coated and uncoated areas. There were also areas that had been consolidated in 1996 displaying no further signs of salt activity. Other plaques required the partial removal of the coating (Figures 4 and 5). In some areas the disrupted coating or dirt was all that held loose flakes of enamel in place. These were retained by re-dissolving the consolidant with a drop of solvent applied on a sable brush at the appropriate spot. This practice had been used in 1999 on the crizzled blue and mulberry coloured enamels on the Louis XII Triptych (552-1877), Limoges, around 1498-1514.1 The painted enamels are known to have had at least two different coatings in the past. 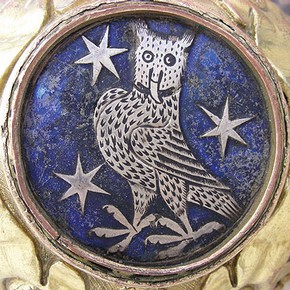 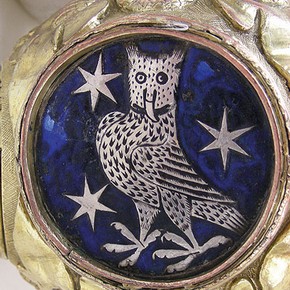 Re-examination in 2008 revealed signs of further degradation, including new flakes of the mulberry enamel. Figure 6 shows a detail of the salt efflorescence, flakes of blue enamel and copper corrosion products held within the degraded surface coating. The re-treatment followed the concept of minimal intervention with localised cleaning, in an attempt to lift salts from the surface, and consolidation of loose flakes as described above. 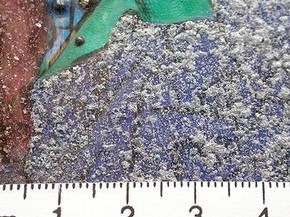 Re-examination of the objects has highlighted the problems faced by the conservator. The most appropriate current approach to interventive treatments remains a cautious one based on the needs of each object. Treatment decisions can conflict with each other and it is always difficult to decide how far, or even if, to proceed. If the deterioration is not stopped, the enamel could eventually be lost. Research remains important to find solutions to the problems encountered in the conservation of chemically unstable enamel, including the improvement of environmental conditions and the use of current and new consolidation materials.

I would like to thank Juanita Navarro, Senior Ceramics Conservator, for valuable discussions and information.