Digital in-fills for a carpet 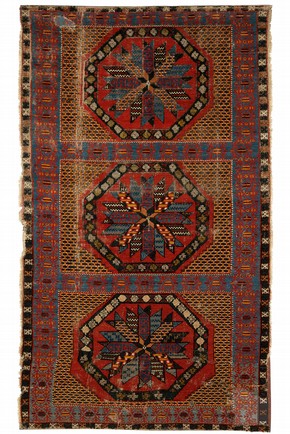 Figure 1. The Carpet after conservation with digitally printed in-fills (Photography by Frances Hartog)

The carpet fragment (784-1905) shown in Figure 1, woven in Southern Spain in the sixteenth century, measures approximately 2m high by 1.25m wide. It is one of almost 95 textiles chosen for display in the Museum's new Medieval & Renaissance Galleries which opened in December 2009.

In the past, the carpet had been displayed in a glazed frame. To examine it, it was removed from its frame and the stitching holding it to its fabric-covered, wooden back board was unpicked. It became apparent the bottom right corner of the carpet was not sewn to the back board but nailed. On close inspection it was evident the corner was in fact missing and the area of loss had been in-filled using plaster, cleverly textured and painted to blend with the original textile. Further investigation showed that this interesting choice of in-fill had been employed in other smaller areas of loss in the bottom third of the carpet and there was also a larger plug in the top left quadrant (Figure 2).

Though visually these in-fills worked beautifully, they were not sympathetic to the characteristics of the original textile; they were inflexible, extremely brittle and heavy. The design requirements for the new galleries stipulated that the carpet be on open display, hanging vertically. If this were to be achieved safely the plaster plugs would need to be removed - but what should replace them? 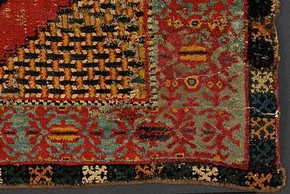 The fragment is relatively small with a complex, busy, highly contrasting, geometric design. In the past textile conservation has been relatively conservative in its use of in-fills; with conservation solutions wishing to be distinct from those of restoration. Rather than reweaving areas of loss, typically, dyed fabric is used, several pieces can be sewn together to give an impression of the missing design. In this case though, there is no dominant colour and attempting to recreate the complexity of the design using blocks of dyed fabric would be clumsy and in danger of drawing attention to the losses, inhibiting the viewer's enjoyment of the original design.

A more precise rendition of the design was aesthetically desirable. Fabric patches could be hand-painted but ensuring a crisp, accurate fit of the missing geometric pattern would be both challenging and time consuming. A printed method would be more appropriate but an initial artwork would still be required from which to print.

At this time, Alice Cole, a final year RCA/V&A MA conservation student, had just completed her research project 'Digital Printing for Textile Conservation'1 digital printing appeared to offer an ideal solution for this particular object. The missing areas of design could be accurately recreated and, very importantly, fitted by manipulating digital photographic images of the pattern repeat, using the existing skills of the Photographic Department in the person of Ian Thomas.

The idea of using digital printing had first to be agreed on by the curators, both those from the object's 'parent' department and those responsible for the gallery where the carpet is to be displayed. At first the proposal met with some opposition; it was suggested that using so accurate a recreation of the missing areas could be seen as 'hood-winking' the Public. Reassurances were offered; the design could be printed in a lighter shade than the original, fulfilling the six inch/six foot rule (the in-fill is clearly visible at a distance of six inches but blends at a distance of six foot). The use of stippling to in-fill areas of loss in wall paintings was cited as a similar conservation solution. It was also explained that the patches, which were to be stitched in place, would be separate to the planned overall stitched support and therefore could be removed. The assurances coalesced to result in an agreement. 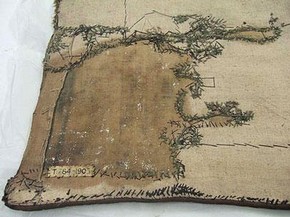 Figure 3. Reverse of bottom right corner, before conservation (Reproduced by kind permission of the Tetley Workshop) 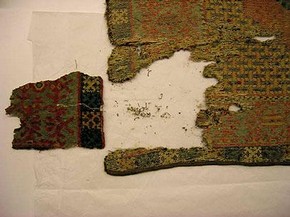 Figure 4. Reverse of bottom right corner after removal of plaster plug (Reproduced by kind permission of The Tetley Workshop)

The existing plaster plugs were removed mechanically. The paint which extended beyond the plugs was analysed and the binding medium was found to be linseed oil. Much of it had leached out into the carpet's lining, destabilising the paint, which eased its removal considerably (Figure 3). Two combinations of solvents applied on cotton wool swabs proved remarkably effective: industrial methylated spirit with Stoddard's solvent at a ratio of 1:3 and acetone with Stoddard's solvent at a ratio of 2:1 (Figure 4).

From Alice's research the choice was made to use pigment printing; wet fastness test results were good, pigment inks are more resilient to light fading than the dye-based reactive or acid inks and the printing process does not involve any wet or steam treatment, avoiding the risk of shrinkage of the printed fabric.

The printing was handled through Zardi & Zardi , a company familiar and sympathetic to the heritage sector. Several trials were necessary to achieve both the correct fit and a good colour match, the latter being complicated by the impossibility of the object travelling to the printers. A linen fabric from a range used regularly by the printer was chosen as the substrate, a length of which was sent to the Museum for scouring before printing to avoid the danger of shrinkage in the future, should the carpet ever become wet (Figure 5). 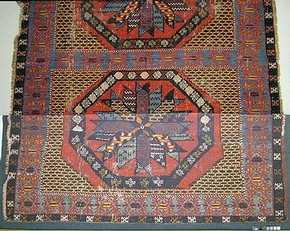 The time lapse from ordering the print to receiving the final result was several months, with experience this can now be shortened. One important improvement would be to ensure the digital image supplied to the printers is of a sufficiently high resolution. Had a large format transparency been scanned at a very high resolution a quicker outcome would have been achieved.

The result of this initial use of digital printing has satisfied expectations with the six inch/six foot rule being fulfilled. The printing is lighter in shade than the original and the use of a plain weave fabric, with no pile, will avoid the in-fills ever being mistaken as part of the original carpet. Hopefully, the public will be able to appreciate the design of this carpet fragment without the areas of loss detracting from their experience.

The treatment methodology and digital printing co-ordination was carried out by V&A Textile Conservation Studio but the work was contracted out to The Tetley Workshop.