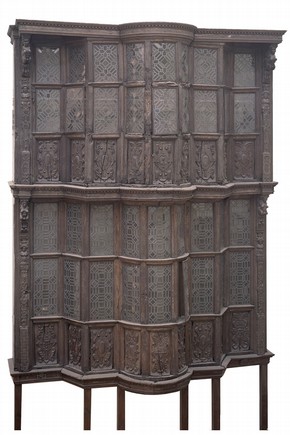 The façade of Sir Paul Pindar's house (846-1890) is a three-storey wooden house front built in 1600 and is one of the very few timber buildings to have survived the Great Fire of London in 1666. Originally located in Bishopsgate Without, it was dismantled and presented to the Museum in 1890 when Liverpool Street Station was enlarged. The façade was first reconstructed in what is now one of the V&A's Cast Courts prior to being moved, in 1909, to Gallery 48, the old shop area by the main entrance of the Museum. In early 2007, the front was dismantled and most components were brought to the Conservation Studios for examination and treatment.

The entire wooden structure is made of oak. Structural timbers at the outside employ mortise and tenon joints with big wooden pegs to secure the joints. The panels at the outside are nailed to the timber frames. The inside panelling is constructed as frames with mortise and tenon joints, the panels set in a groove with pegs to secure the joints. No evidence of original glue was found which enabled the house and the individual panels to be dismantled relatively easily by removing the pegs.

Once dismantled the individual panels and frames from the exterior and interior, together with cornices and mouldings, were examined and the damage was recorded. Major problems to be addressed during conservation were the structural degradation of the wood due to weathering, former woodworm infestation, mould and mildew. These factors combined had resulted in loose joints along with fractured and missing timber, so treatment was aimed at stabilizing each individual piece structurally to allow all components to be handled and reassembled safely. The unstable wood required consolidation and insertion of new material to compensate for losses of fragile areas. The display incorporates a supporting steel structure at each floor of the façade. 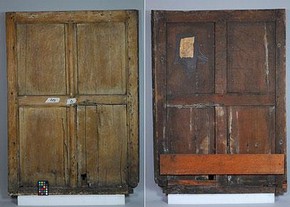 Figure 1 (a&b). Front and back of interior panel No. 39 with losses at the lower horizontal rail and lower corner joints with the softwood repair screwed to back (Photography by Carola Schueller)

Examination revealed that the interior oak panelling at the first floor was unstable and required specific treatment due to losses at the joints caused by standing water (Figure 1a). Through the endgrain of upright frame members, water had reached far into the timber causing it to develop localized growth of mould and mildew, despite the oak's natural resistance to biological attack owing to the presence of tannins. Stress and strain on the degraded wood had subsequently resulted in cracks, fractures and the loss of original material. Attempts were previously made to resolve the structural problems either when the front was installed in 1890, or when moved in 1909. Supporting softwood was nailed to the frames and panels, the fragile joints were left exposed (Figure 1b). These losses made it possible to examine the mortise-and-tenon dimensions, tool marks of chisels and saws and manufacturing details (such as the chamfered edges of the tenon which helped the tenon to slide alongside the joint shoulders into the mortise during assembling) adding to our understanding of sixteenth and seventeenth-century woodworking techniques. 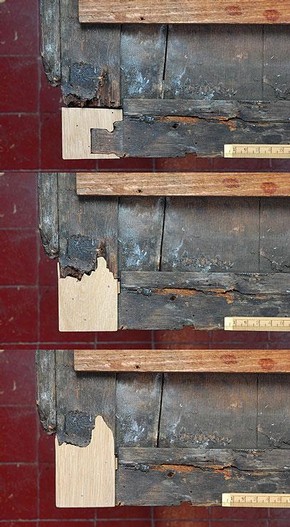 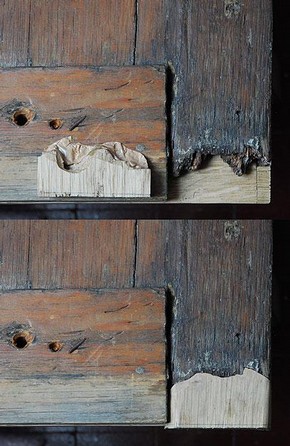 To regain structural stability and to protect the damaged original substrate adjacent to the area of losses, modern, wooden fills were needed. Two conservation principles were to be considered: no original material should be sacrificed, and, whatever material is added to the original has to be easily removable in the future. The options for replacement materials are wood, modern resinous putties or a mixture of both fitted to the shape of the loss and then adhered to the original.1  Loss compensation in this case would have disguised the original joint and obscured the early seventeenth-century mortise and tenon joint. Hence, it was agreed that loss compensation should be de-mountable.

The first step of the treatment involved consolidating fragile areas around the losses. The acrylic resin Paraloid® B72 was used at a 10% and 15% concentration (weight/volume) in a solvent mixture of acetone and ethanol (3:1). Fast evaporating solvents like acetone and ethanol do not support deep penetration into the wooden structure;2 since the deterioration was mainly superficial, the consolidant-solvent-mixture gave adequate strength for further treatment and handling. The choice of non-toxic solvents also allows for an application in the galleries for larger parts which could not be moved to the conservation studios. The liquid resin was partly injected into the cavities with syringes and partly brushed onto the wood. The 10% solution was used first and then the 15%, both procedures were repeated twice.

Oak was chosen to replace the lost frame members as it matched the original species, grain and figure. Thin and wide strips of oak were prefabricated (3mm, 4mm and 5mm thick with a width of 60mm) and then blocked in layers to the areas of loss. Some replacements were in two parts enclosing surviving tenons (Figure 2): the replacement face was screwed to the back part of the fill. To match the layers to the original, the outline of the loss was transcribed onto transparent tape that was then adhered to the oak strips. The wood was cut by hand with a jeweller's saw following this outline and the individual layers glued together with Canadian cold setting fish glue. For the inner areas of the loss, a tight fit was unnecessary for the protection of the original joint and for the stability of the frame. It was only necessary at the topmost surface layers, where in addition to the oak strips the two component epoxy resin Araldite® Av1253 was used.

The Araldite Av1253 epoxy putty was applied to the oak replacement and then brought close to the original wood with a sheet of transparent polyester film Melinex® in-between acting as a separation layer. Once hardened, the replacement was taken off, the polyester film was removed and the top layer glued to the lower layers (Figure 3). The infill fitted exactly into its location, all layers together slide as a whole into the mortise and fit in place. Fragile areas are now consolidated and strengthened with Paraloid B72, a non-intrusive and reversible approach which allows each part to be removed for future examination of the joints. All exposed edges and broken joints were protected and ready for safe reassembling in the Simon Sainsbury Gallery.