During the design stage of the new Medieval & Renaissance Galleries (the project) the decision was taken to adopt a passive approach to environmental control. This article describes the rationale, analysis and benefits of this approach. The passive approach developed, exploits the massive nature of the building and uses sophisticated control techniques to minimise variations in humidity in the galleries but uses neither refrigeration nor humidification machinery to achieve its performance.

This article is primarily intended to describe the design measures developed for the control of humidity and temperature. Other environmental factors which affect the preservation of objects, such as lighting and dust filtration are not treated in detail.

During the design phase of the project the revision of the V&A environmental guidelines for conservation of objects in the Museum opened the opportunity of moving away from the traditional approach for environmental control. The traditional approach to environmental control relies on mechanical systems of air-conditioning to closely maintain the internal environment within a specified range of conditions. Such systems are energy intensive in use and require substantial space for machinery and considerable capital investment. Furthermore, in the case of the Medieval & Renaissance Galleries, the installation of such a system of air-conditioning would have required expensive alterations to the fabric of the building.

A comprehensive review, carried out by the V&A, of the objects to be included in the galleries and their previous display conditions highlighted that many of the objects were acclimatised to and displayed in a dry museum environment. This informed the environmental control systems design: object conservation should be prioritised over occupant comfort; on a seasonal basis relative humidity (RH) could be allowed to vary through a wider range than originally anticipated, between a minimum of 35% and maximum of 55% (45% +/- 10%); short-term fluctuations in RH should be minimised as far as possible and kept to less than a 10% variation in any twenty-four hour period; objects of higher sensitivity should be installed in showcases to further buffer them from environmental variations.

In addition to the conservation guidelines, the V&A sustainability policy also called for minimising the energy use of all new projects. 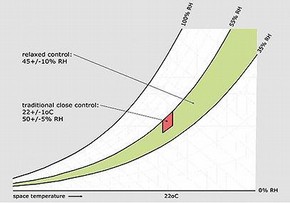 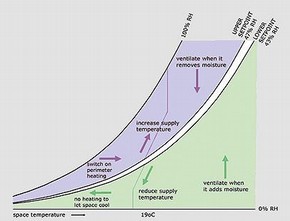 Thus, the challenge to the design team was to develop a low energy system for environmental control that would provide the internal environment required for the long-term preservation of the collections. Such an approach was found and developed for the project and its strategy and performance are described below.

The target conditions (Figure 1) illustrates the range of thermodynamic conditions (shown on a psychrometric chart) permitted by the V&A environmental guidelines for conservation in the project and compares them with a more traditional mechanical air-conditioning system (with a control band of 22ºC ±1ºC and 50% ±5%RH). As can be seen, there is a far wider range of conditions permitted by the approach adopted for the project.
The internal environment of the galleries is subject to many constantly changing influences including, amongst others, internal loads generated by visitors, heat released by electric lighting, infiltration of outside air through the building fabric, and external temperature and humidity variations conducted and convected into the interior. The design strategy developed for stabilising the RH environment involves exploiting the external air condition together with the ventilation and heating of the interior. Examples are given below describing how this works in practice. Reference is made to Figure 2, which illustrates the environmental system behaviour depending on interior and exterior conditions (again using a psychrometric chart).

To verify this control strategy, detailed analysis was carried out to assess the conditions that would occur in the galleries throughout the year and assess the degree of control that would be achieved. IES Virtual Environment dynamic thermal analysis software was used and in particular the Apache Simulation module. The program performs a detailed analysis of heat transfer and humidity processes and includes the effects of heat storage within the thermal mass of the building. The analysis used the CIBSE DSY weather data set for London which gives typical hourly values for temperature, moisture content and other climate factors corresponding with a hot summer. 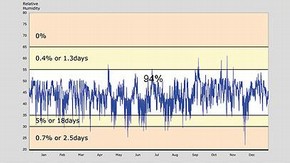 Figure 3. Annual RH level results for one year within the gallery spaces

The RH control was found to be very effective with the gallery spaces within the target band for more than 94% of the year (Figure 3). This performance is comparable with what would typically be achieved by a traditional close control mechanical air-conditioning system and, in terms of time spent outside of the desired control band, represents a very good level of control. Extremely low and high RH levels are almost completely avoided with only around 0.7% of the time below 30% RH and no periods above 65%.

In terms of occupant comfort the control strategy does lead to hot and cold periods which could be considered uncomfortable in a conventional space. However, for around 68% of the time, conditions are maintained at what would generally be considered comfortable temperature levels.

Tests carried out with an alternative weather file, the CIBSE Test Reference Year, achieved even better results with 97% of the time between 35% and 55% RH. 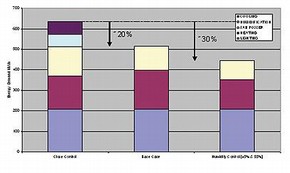 The analysis work performed also, crucially, allowed the stability of RH to be investigated in detail. Results from the analysis showed that there would be a significant number (around 29%) of twenty-four hour periods where the RH change is greater than 10%, however it also showed that periods with RH changes greater than 20% would be rare (around 1% of all twenty-four hour periods). This level of performance was accepted by the V&A. In fact, the performance in practice is expected to improve on this since moisture storage and exchanges with the building fabric, which were not part of the dynamic thermal modelling results (they were separately studied by other means), will act to moderate these variations.

Removing air-conditioning, particularly cooling and humidification systems, from the project gives a significant reduction in energy use (around 30%) when compared with a traditional close controlled mechanical air-conditioning system (Figure 4)

In conclusion, the passive approach developed provides a level of control compatible with the conservation requirements of the project, it requires less capital investment in terms of mechanical equipment and leads to reductions in energy usage, running costs and carbon dioxide emissions of the galleries.