'This burden of light is the work of virtue': Research on the Gloucester Candlestick 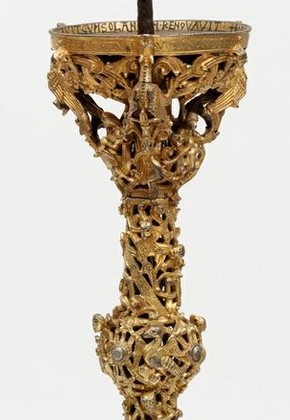 The preparation for the Medieval & Renaissance Galleries has provided an opportunity to research a number of extraordinary objects in the Museum's collection. One such exceptional piece is the Gloucester Candlestick (7649-1861), a rare example of Romanesque metalwork (Figure 1). Engravings upon the stem show that it was given by Abbot Peter to the Benedictine Church of St. Peter in Gloucester (now Gloucester Cathedral), dating the piece between 1104 and 1113. The country of origin of its manufacture has been widely debated, though comparisons with manuscript illuminations from Cambridge and Durham suggest that the decorative style is English. Analysis of the candlestick has uncovered intriguing evidence regarding its construction, increasing our understanding of metalworking techniques at this period for which little metalwork survives.

Initial examination raised questions regarding the way in which the candlestick was made. Disassembly showed that it was cast in three parts, in the lost wax or cire-perdue method. This technique is described in detail by the contemporary craftsman and Benedictine monk Theophilus in his technical treatise 'Schedula diversarum atrium', dated between 1100 and 1120. 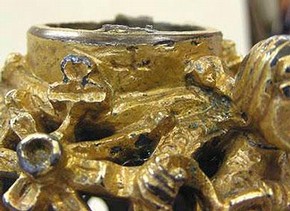 Figure 2. Detail of the cross, marking the position of the lower section, and broken inner segments (Photography by C. Viegas Wesolowska)

At present, the three sections of the candlestick; the drip pan, stem and base, are secured by an inner copper alloy tube through which an iron rod runs, threaded and tightened with a nut at the base. During examination and dismantling, possible evidence of an earlier method of assembly was found. On the inside of the joins there are marks, slots and protruding segments (now broken). On the outside, there are engraved crosses, approximately 3mm high, which indicate the positioning of the sections during assembly (Figure 2). Further studies are required to determine if the copper tubing is part of the original construction or a later addition.

The Gloucester Candlestick has an unusual metal composition for a cast piece. Analysis in the 1980s identified it as a brass copper alloy with an unusually high percentage of silver and that each cast section had a different composition (Figure 3).2 These results were corroborated by recent X-ray fluorescence spectroscopy (XRF) non-destructive analysis.3  Why this unusual core alloy was chosen and why differing amounts of silver were used in each section was not immediately apparent. It is possible that the silver was added to change the colour of the metal, to add to its fluidity in casting or aid the finishing of the piece. To test these theories, metal samples based on the original compositions of each section of the object were prepared to determine the characteristics of the alloy in the casting and finishing processes. The samples would also be indicative of the original colour of the finished surface as they would show the metal surface prior to having been gilded.

Two samples of each composition were made, one left unfinished and the other scraped and polished, producing the final surface colour and revealing, through the finishing process, the qualities of the alloy (softness, etc.). A further two samples were made from a mould taken from the candlestick (Figure 4) to study the behaviour of the metal in a more complex mould.

The results showed that silver in the alloy increased the fluidity in the pour of the casting (the higher the level of silver the better the fluidity). This resulted in sharper detail on the alloy cast into the mould. Lead is usually added to make the metal flow in the cast and improve the workability of the final surface. However, as mentioned in Theophilus' treatise, if the surface was to be gilded, the lead in the alloy would disturb the gilding. Hence, the desire to gild the cast metal may influence the substitution of lead with silver for this candlestick.

The differences in composition did not noticeable affect the pouring qualities of alloy and the colour on the three samples was almost identical. It is therefore unclear why there is a difference in the percentages of silver across the three sections, though perhaps whilst the need to have proportionally high levels of silver was recognised, this was added empirically rather than in exact measured amounts.

The outcomes of the tests give a strong base to which further historical research may be applied. The tests have uncovered valuable information regarding the construction and composition of the Gloucester Candlestick. Further comparative analysis would determine whether any of the construction methods were used elsewhere. It is hoped that further study of a pair of candlesticks made of electrum, around 1100, from the Benedictine order's Hildesheim workshops and a recently discovered candlestick from the Abbey of St. Denis will broaden our understanding of Romanesque metalwork made for Benedictine communities.

We are grateful to Marian Campbell for her support, Duncan Hook at the British Museum for taking time to analyse the metal alloy, The Crucible Foundry for casting the samples, Graham Martin and Lucia Burgio. We would also like to thank the Founders Guild and the 1851 Royal Commission for financial support.