Training through collaboration - conservation of the Camaldolese Gradual

The illuminated musical manuscript (MSL. 5836-1868) was produced in Tuscany, probably Florence, around 1380 for the Camaldolese order (Figure 1). The manuscript measures 559 x 410 x 150mm and is made up of 21 quires, each of four parchment bifolia, sewn onto six alum-tawed bands that had been laced into the 18mm thick wooden boards. The binding is full leather decorated with metal bosses. There is evidence of four lost straps, two at the fore-edge and one at the head and tail. The manuscript had been rebound at least once as evidenced by the remains of secondary spine leather on the boards.

The manuscript seems to have been intact on arrival at the South Kensington Museum in 1865 but had since deteriorated, probably due to the weight of the boards and a weak binding structure, requiring full conservation and re-binding. When it was identified for inclusion in the Medieval & Renaissance Galleries it immediately threw up the question of how best to conserve it and whether we had the expertise; the collection at the V&A contains few illuminated manuscripts on parchment, particularly of this size, and the book conservators have limited experience of working with such bindings.

Sound binding techniques would be vital in ensuring a structure strong enough to support the heavy boards to maximise the longevity of the proposed conservation. The choice of sewing, spine linings and endpapers would all be important in achieving optimum opening with good board attachment and leverage. The two options were to send it out to be conserved or to take a collaborative approach by seeking an experienced consultant to come and work alongside a conservator. It was agreed with the Head of Conservation that the latter would provide a unique training opportunity. Christopher Clarkson, independent conservator and Conservation Consultant to the Bodleian Library, Hereford Cathedral Mappa Mundi & Chained Library, The Wordsworth Trust and Dove Cottage, was approached as he had both the necessary skills and experience in teaching.

After a meeting with Chris and a day spent looking at the manuscript, a plan and schedule of work was drawn up comprising two phases. The first phase would be undertaken by the book conservator in preparation for phase two when Chris would come to the studio for a week to undertake the binding. As part of phase one various colleagues, from the V&A and outside, were consulted for their expertise. This included analysis of pigments by Lucia Burgio, Senior Object Analysis Scientist, and the removal of specific metal furniture on the boards by Sophia Wills, Senior Metals Conservator. The X-radiography of boards was undertaken by Janet Ambers and the identification of wood by Caroline Cartwright, both museum scientists in the Department of Conservation and Scientific Research, the British Museum. The pulling of the manuscript, lifting of board papers, cleaning of leaves, repairs to parchment, consolidation of pigments, digging out of filler in board channels, sourcing of leather and other materials, and documentation was undertaken by the book conservator. 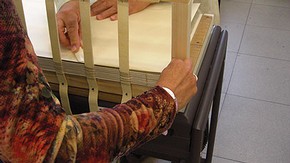 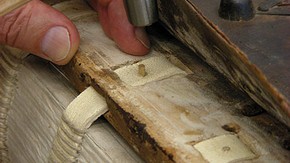 Figure 2. Securing the laced in bands (Photography by Jane Rutherston) 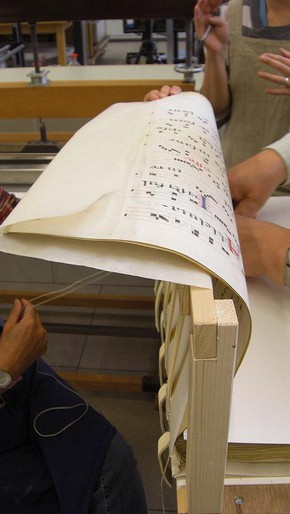 Chris came to the studio towards the end of September 2008 to undertake the second phase. The tacks were removed to release original bands and headbands, the channels were cleaned of remaining filler, new endleaves were made up, the manuscript quires (incorporating a concertina guard) and the headbands sewn, the boards laced on and fixed (Figure 2), and the leather dyed. The book conservator was able to assist in many of the procedures (Figures 3 and 4). At all stages Chris would explain the rationale supporting the choice of procedure and explain the methodology to the conservators, allowing photographs and notes to be made as the work progressed. The lining of the spine, covering the spine with new leather and advise on laying down of the new board leaves was completed in February 2009. Throughout the project Rowan Watson, Senior Curator, Word & Image Department, was involved in all decision making processes regarding the re-binding.

This project offered a unique opportunity not only to discover more about the gradual but for the book conservator to broaden her skill base and benefit from Chris's technical expertise and historical knowledge of binding structures. It also illustrated the huge advantage working in the V&A where conservators are able to seek advice and learn new techniques and treatments from colleagues both within and outside the Museum. Even the ability to gain access to different tools and materials to aid their work is a privilege that should not be underestimated.

I would like to thank Christopher Clarkson, Janet Amber, Caroline Cartwright, Lucia Burgio, Sophia Wills, Rowan Watson and my colleague Anne Bancroft for their kind help on this project, as well as Peter Kelleher and Maike Zimmermann, V&A Photographic Studio, for their patience in videoing and photographing many of the stages of work.