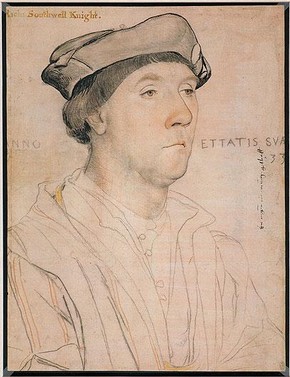 When examining a drawing how do we describe what we see; what are the materials; how were they applied and, furthermore, how may these factors relate to the function of that drawing?1 This research investigates the function of the sixteenth-century German artist Hans Holbein the Younger's portrait drawings by reinstating the object at the centre of the research and investigating its means of production. This may seem an obvious approach but whilst Holbein's portrait drawings are by no means neglected, it is surprising how much technical information is unknown, approximated or has been passed down, sometimes inaccurately, through literature and never really questioned.

This research involves a systematic examination of Holbein's portrait drawings that relate to extant Holbein paintings and miniatures. Its aim is to clarify what information is held in the drawings and how that, in turn, informs the method of transfer to oil or miniature, and what these methods may have been. Does the function of the drawing help to dictate the processes and materials of production and how may they affect the appearance of his drawings?

My initial findings concern three aspects of the drawings: the rendering of the flesh tones; what appears to be Holbein's use of red chalk as the initial drawing media for facial features; and, finally, the as yet unresolved and most complex of the issues, the contouring, incorporating the method of transfer. In this article I will be focusing on the last of these, explored through two portrait drawings from The Royal Collection at Windsor: Sir Richard Southwell, 1536 (RL 12242, Figure 1) and Elizabeth, Lady Audley c.1538 (RL 12191, Figure 2) - which correspond respectively to an extant painting and a miniature by Holbein. 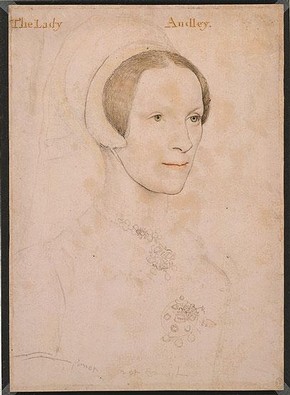 Contours are a prominent feature in Holbein's portrait drawings. They are strokes that define shape, and the function of such contouring in Holbein's portrait drawings, along with their link to the process of transfer, is often debated. Uncertainty in the literature relating to these contours is in part due to a lack of definition or clarification of what is being described but also is the result of difficulties in deciphering the sequence of media. The contours have been described as having been reinforced with metal point and, in other cases, in ink. In some drawings the authorship of these contours has been called into question.2

In an attempt to clarify this issue, it helps to consider the contouring in Holbein's portrait drawings in multiple ways. First, there is the contour itself and the shape it defines. Then there is the issue of the make-up of those contours and how they have been affected - for example, have they been affected by the means of transfer (i.e. indenting with a metal point or a stylus of some kind, or by pricking with a needle); or by the action of reinforcement, which may not have anything to do with transfer - or indeed a combination of these things. Investigating the materials and techniques and trying to decipher the sequencing of these contours is beginning to untangle these issues.

Since contours can include evidence of transfer, a definition of what that evidence may be is important. Obvious signs would be pin-pricks for pouncing; less obvious, though, are the indentations that trace over the contours - and distinguishing between the use of metal point as a means of transfer and solely as a means of drawing is problematic. There is little doubt that the contouring is significant. This research has confirmed that contours serve to work towards capturing likeness and are key in providing the salient lines of that likeness for the potential transfer of that drawing.

The contours that make up Sir Richard Southwell are complicated and hard to distinguish and describe. Perhaps out of the two drawings considered here, it best illustrates the complexity of the contour issue. Chalk, possibly charcoal, metal point and black aqueous media have been used. Southwell's chin line is an illustration of Holbein's contours rarely being a continuous, single line but rather a series of strokes and often made up of more than one type of media. In the fainter areas of his costume there is said to be metal point over black chalk or charcoal, but this could be the result of black lines resulting from the blind indentations being filled with the black friable media. Indentations following contour lines for transfer are present. Indentation implies pressure from an instrument that traces the salient contours, that in turn makes a mark onto the underlying substrates - often said to be a carbon paper on top of a panel.

Although Lady Audley survives in drawing and miniature portrait format, there is no known oil painting of her. Her outer facial contours on the drawing are somewhat easier to read and appear to be black chalk overlaid with black ink or watercolour. The wet media serves not only to emphasise the contour but also shows a commitment to that final line. The use of metal point alone appears to be used in the design for the necklace. There is no black chalk underdrawing in that area. There are no indentations on this drawing and this has been taken as an indication of no visible signs of transfer. This, in turn, may imply that there was never a panel painting of this subject and also calls into question the function of the drawing in relation to its use as the drawing for the miniature.

In conclusion, my initial findings illustrate a variety of Holbein's drawing materials and techniques. Further investigation will hopefully clarify Holbein's processes and use of the drawings. The next phase of my project will build on scientific analysis and ongoing examination of the drawings to inform reconstruction, which in turn, may provide further insight into the function of Holbein's captivating drawings.

I would like to thank Alan Derbyshire, Alan Donnithorne, Dr Susan Foister, and Dr Harriet Standeven.

Victoria Button is funded by the Arts & Humanities Research Council.

1. This article is an adaptation of a presentation given during an academic workshop at the National Portrait Gallery, London, in December 2008. http://www.npg.org.uk/research/programmes/making-art-in-tudor-britain.php

2. There are many references to the contours, for example: Cust, Lionel. 'On a Portrait Drawing by Hans Holbein the Younger', The Burlington Magazine for Connoisseurs vol. 18, No.95 February 1911, pp. 270; Ainsworth, Maryan. '"Paternes for phiosioneamyes": Holbein's portraiture reconsidered', The Burlington Magazine. vol. 132; No.1044, p. 180 (March 1990); Parker, K. T. The Drawings of Hans Holbein in the Collection of His Majesty the King at Windsor Castle , (Oxford and London: Phaidon Press, 1945), p. 28