‘Shipping in a Calm’ by Willem van de Velde the Younger 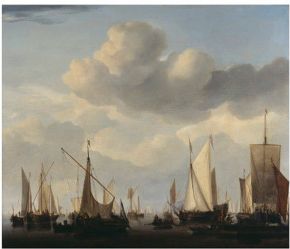 ‘Shipping in a Calm’ (V&A 482-1882) was created by the celebrated marine painter, Willem van de Velde the Younger, in 1658. This oil painting on an oak panel demonstrates much of what the artist was so highly regarded for his meticulously rendered and carefully positioned vessels in a calm and tranquil atmosphere.1 The work entered the Paintings Conservation Studio in preparation for its inclusion in the new Europe 1600-1800 Galleries, opening in early 2015.

Examination of the painting’s condition revealed that van de Velde’s atmospheric sky had been almost entirely re-painted by an earlier restorer. This area was dramatically distinct from the artist’s original paint layers. The overpaint was considerably thicker in texture, had discoloured to tones of green and yellow and was applied flatly, without modulation to form (Figure 1). During the recent conservation treatment, the oil-based overpaint was carefully removed with free organic solvents, along with several layers of degraded, natural resin varnish coating the painting.

Beneath the earlier restoration, van de Velde’s paint layers were remarkably well preserved. However, certain issues related to the artist’s technique and aspects of the paint layer’s present condition might explain why the decision was made to cover the original. 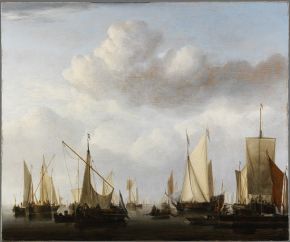 The artist’s paint layers, from the white chalk ground, to the warm brown imprimatura, to those composing the sea and sky, were applied very thinly.2 Only in the detail of vessels and densest areas of white clouds was the paint built up to impasto. The horizontally-running wood grain can be seen prominently through these thinly applied layers. In the sky, the colour of the warm brown imprimatura layer is noticeably visible, particularly in the upper right cloud formation (Figure 2). In addition, there are minor areas of paint loss, from past issues of flaking, scattered across the panel’s wood grain. The previous restorer may have found these aspects problematic and sought to remedy them by repainting the background.

Whilst it can be assumed that paint losses would not have been intended, it is less clear how much of the wood grain and imprimatura the artist would have wished to remain visible. The wood grain assists in creating the illusion of sea waves and the imprimatura gives warmth and depth to the sky and mid-tones of clouds. These elements have been commonly noted in technical studies of Dutch Golden Age land and seascape paintings.3

It is likely, however, that these effects have become enhanced with time. Damage to upper paint layers may have occurred as a result of previous cleaning and chemical changes in the lead white-based paint film may have led to increased transparency, particularly over the wood grain strata.4

Following cleaning, areas of vulnerable paint were consolidated, the painting was varnished and losses were filled. In contrast to the earlier restoration, inpainting was approached as minimally as possible. Discrete losses were mimetically retouched and only the areas of most visibly distracting wood grain and conspicuous imprimatura were reintegrated with translucent layers of dry pigments bound in Paraloid™ B-72.

In removing an extensive earlier restoration, van de Velde’s paint colours and handling techniques can now be fully appreciated. Through adopting a minimal approach to retouching in the most recent conservation treatment, the atmospheric effects created by the eminent marine painter can now be appreciated, together with an acknowledgement of the painting’s history and age.