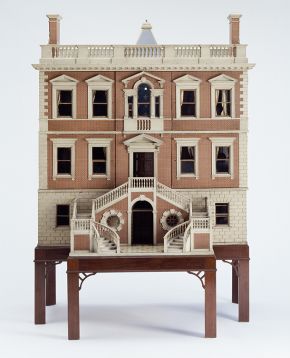 The V&A Museum of Childhood in Bethnal Green has a world-class and internationally significant collection of around one hundred dolls’ houses, models and shops.1 Key examples from this extensive collection will be shown in the upcoming ‘Small Stories: At Home in a Dolls’ House’ exhibition, opening at the V&A Museum of Childhood in December 2014, prior to several international venues thereafter.

The exhibition will feature twelve houses containing approximately one thousand, nine hundred pieces of furniture, dolls and decorative items from the Museum’s dolls’ houses collection. It will include country mansions, suburban villas and high-rise apartments, with one of the earliest examples being the 1760 Tate Baby House (Figure 1), and the most recent, a 2001 Kaleidoscope post-modern family home (Figure 2). Exhibition themes include the history of the home, ways of living, and the evolution of the dolls’ house from a wealthy adult’s showpiece to a mass-produced child’s toy.2

In order to prepare the dolls’ houses for an international touring exhibition, work was undertaken to ensure that the objects were in a suitable condition. The dolls’ houses and contents were individually examined and documented. The condition assessments showed extensive surface dirt in certain cases. All of the houses were structurally stable with only minor damage, such as cracked and detaching moulding, or missing elements (e.g. door handles). There was evidence of adhesion failure, resulting in detached sections of wallpaper and objects from walls in the majority of the houses. Former use was evident through signs of wear and tear, previous repairs undertaken, generally with non-conservation approved materials and inappropriate methods of attaching objects to walls (e.g. Blu-Tack™). The miniature contents had surface soiling, signs of wear and tear, and minor structural damage to fragile objects such as broken and detached elements. 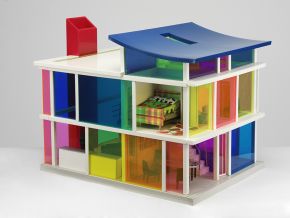 The aim of the conservation treatment was to improve the overall appearance of the houses and ensure structural stability, through several treatment stages:

Although the conservation treatment stages outlined were appropriate for all houses, the techniques and materials used depended on the composition and structure of the individual houses and contents. The dolls’ houses span over three and a half centuries and include a wide range of materials such as paper, textiles, wood, ceramics, ivory, stone, metal, plastic, gilded and painted surfaces.2 It was important, therefore, to use the appropriate technique and conservation materials for the various items. For instance, for The Hopkinson’s House, different adhesives were chosen to secure the organic and the inorganic objects to the walls (Figure 3). When selecting an appropriate adhesive it was important to consider its strength, compatibility with specific materials, its reversibility and if the method of reversibility might damage the objects or walls. In this example, Paraloid™ B-72 20% in acetone was used to attach metal objects and a combination of equal parts wheat starch paste and EVACON-R™ (ethylene vinyl acetate based adhesive) was used for organic objects. 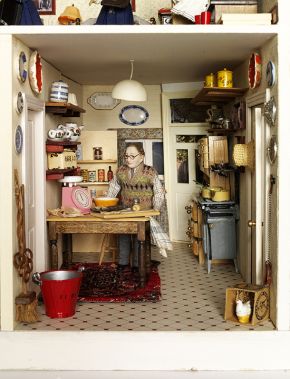 The composite nature of the houses also led to a number of ethical and conservation treatment discussions: for example, the contents of Betty Pinney’s House, which included decorative pictures, mirrors, a wall tapestry and several kitchen pieces, had previously been attached to the walls with Blu-Tack (Figure 4). The Blu-Tack was now brittle and had lost its adhesion property. This house had no other previous method of attachment, neither hooks nor adhesive. Following extensive discussions with colleagues regarding the ethics of using specific treatments, it was decided that hanging attachments (similar to hanging wire for picture frames) should be made, which could then be adhered to objects, as outlined earlier in the case of The Hopkinson’s House.

In addition to conservation treatment, risk assessments were also carried out in order to determine whether the contents were suitable for a touring exhibition, or if they were too fragile to travel. The risk assessments were also vital for determining if mounts were necessary. Parameters for lighting, display and packaging were also addressed. For instance, a fragile chandelier with bendable armatures required more protective packaging in order to retain its shape and a few of the houses had specific light requirements due to the fragile light-sensitive wallpaper inside.

It was also important to ensure that the dolls’ houses and contents comply with the ‘Convention on International Trade in Endangered Species’ (CITES) regulations. This involved assessment of the objects in order to identify any materials which could have come from endangered species and therefore would need a CITIES permit to travel internationally. For example, after assessment, it was discovered that Betty Pinney’s House contained ivory door handles and curtain poles that had not been documented previously (Figure 4). 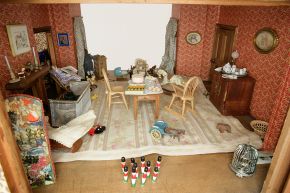 The smooth running of this project, which involved working with colleagues across several Museum Departments, required a highly-organised approach. The size and fragile nature of the dolls’ houses required extensive planning and careful preparation when moving them from the Museum of Childhood to the V&A South Kensington site and within the buildings themselves. Many of the dolls’ houses have fragile protruding features, such as chimneys, banister railings, birds on the roof and milk bottles on the doorstep, which needed to be protected whilst transporting them. The logistics of tracking 1,900 contents were immense, with each item individually allocated to a conservation studio based on the type and material of the object. Communication and a systematic method of working were vital in keeping track of the large number of miniature objects scattered around the Museum site.

Spanning a period of over one year, preparation of the dolls’ houses and all of their component parts for display has been a great challenge and has involved the coordination of numerous colleagues throughout the Conservation Sections. Conservation treatment of the dolls’ houses and their contents is nearing completion. The final stages will involve preparing condition documentation of the 12 houses and the 1,900 content pieces for the touring exhibition, creating made-to-measure protective boxes for each miniature item and packaging them by room location to aid installation.

I am grateful to my supervisors and colleagues on this exhibition project for their expertise, in Book, Paper, Plastics, Ceramics, Metal, Furniture and Preservation Conservation Studios and at the V&A Museum of Childhood.