The conservation of Oriental lacquer

The opening of the new Tsui Gallery of Chinese Art offered an opportunity to carry out conservation treatment on the many fine examples of oriental lacquer which the V&A possesses. Following an examination of the materials and techniques of oriental lacquer, the conservation of one particular object - a lacquer vase made in Shanghai in 1947 by Shen Fuwen - will be described. This vase (see Figure.1) is made of red oriental lacquer on a wooden core with a decoration of yellow and green lacquer drips; there is a decoration of crushed eggshell around the rim at the top (see Figure.2). The word 'lacquer' is widely used to describe many different substances; however, in this paper it will solely refer to oriental lacquer. 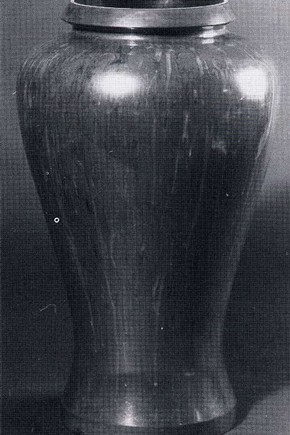 Oriental lacquer is made from the sap of the tree Rhus vernicjfera which grows in China and Japan. The sap is tapped by cutting notches in the bark and allowing it to drip into containers hung around the trunk. After straining, it is stored in air-tight containers sometimes for many years. The quality of the lacquer is dependent on the soil, weather conditions and year of tapping. Pure raw lacquer is used for the best work, however, it may be extended by the addition of various oils and saps. The poorest quality lacquer being obtained by chopping up smaller branches, boiling them to extract the sappy liquid and then straining.1  The highly toxic raw lacquer must be processed before use. The traditional technique is complex and produces a lacquer which will dry to the required hard finish. Pigments are added at this stage.

Traditionally vermilion (mercuric sulphide, HgS) is added to produce the red lacquer.2 Vermilion is obtained by grinding and levigating (a process of fractional sedimentation) the mineral cinnabar or synthetically by combining the elements mercury and sulphur. Yellow lacquer is made by adding orpiment (arsenic sulphide, As2S3 ) which is extremely poisonous and is obtained by grinding and levigating the naturally occurring mineral.

The blue colouring matter indigo (C16H10N2O2) Obtained from various plants of the genus indigofera is added to the orpiment to make green lacquer. Black lacquer is made with carbon © as the pigment. Carbon black is obtained from the partial burning of oil, wood and other organic matter and will therefore contain some impurities.

Raw lacquer is composed of 65-70% urushiol, 20-25% water, 10% gummy (polysaccharide) material, approximately 1% enzyme laccase plus insoluble nitrogenous substances and trace metals e.g copper.3 Urushiol is a mixture of similar substances of general formula C6H3(OH)2 R. The percentages of the various compounds with different side chain R are shown below :

The drying of oriental lacquer is a complex process but is basically the oxidative polymerisation of the urushiol initiated by the enzyme laccase. As oxygen is absorbed from the air during the polymerisation process the lacquer has to be applied in very thin layers, each of which is allowed to dry before the next is applied. Also, the relative humidity of the surrounding air has to be high for setting to occur. In this way a hard material of great strength is produced that is capable of being polished and carved.

The surface structure of the vase made by Shen Fuwen shows a very traditional composition with a ground composed of lacquer mixed with clay on a wooden core.4  On top of this is a thin band of black lacquer followed by the red lacquer. There was a considerable amount of surface dirt on the vase and the surface of the lacquer was dull. After careful testing with a range of solvents, soaps and mildly abrasive preparations, the surface dirt was removed with Duraglit Silver Polish applied through Shellsol T (a hydrocarbon solvent with no aromatic content). Duraglit Silver Polish contains a siliceous earth, water, alcohol, fatty acids and an antifoam agent on a cotton wadding.

The surface dirt on the eggshell decoration was removed after careful testing with the mildly abrasive preparation Solvol Autosol applied on small cotton wool swabs moistened with Shellsol T. Solvol Autosol is composed of kieselguhr, a methylated soap and white spirit. 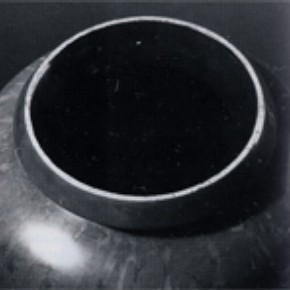 Figure 2. A detail of the vase showing the crushed eggshell decoration around the rim, before conservation. Photograph by Paul Robins, V&A Photographic Studio (click image for larger version)

There were several discoloured retouchings around the base from a previous restoration, these were removed mechanically with a scalpel. The damages to the lacquer were infilled with a gesso putty made from gilder's whiting (calcium carbonate) and parchment size. Inpainting was carried out using the pigment cinnabar plus a small amount of lampblack dispersed in Paraloid B72 (a co-polymer of methyl acrylate and ethyl methacrylate). The pigment cinnabar was obtained by grinding the mineral (first in a mortar and pestle and then in water using a glass muller and slab) and levigating to obtain the required pigment. A surface coating of microcrystalline wax can be applied to the surface of oriental lacquer to give some protection, however, in this case it was considered unnecessary as the vase was going to be exhibited in a glass case and the less put on the surface of lacquer the better.