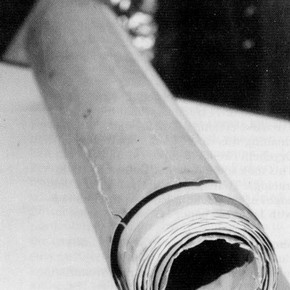 Fig.1. The rolled bundle of papers before treatment. (click image for larger version)

The object to be flattened was one tightly rolled bundle of papers containing tracings of medieval stained glass windows from Fairford Church, Gloucestershire. The Reverend Joyce had traced out the pattern of the windows in 1871 and given them to the Museum in January 1874. The tracings were understood to be painted, of dimensions 245 to 365cm in length by 68cm wide. The information contained in the roll was required by a stained glass craftsman to assist him in the restoration of windows at the church.

Due to the delicate condition of the tracings, the initial survey was necessarily limited to a visual examination of the external layer and edge condition. Since the image was inaccessible, tests could not be carried out to determine if it was fugitive.

The survey showed that the object measured some 25cm in diameter by 68cm wide (Fig.1). It was in poor physical condition, embrittled and discoloured, with fragments detached at the edges and with surfaces exposed and covered in fine sooty dirt. Furthermore it was uncertain as to whether the traced images were supported by any backing paper.

To relax paper objects, their moisture content needs to be increased slowly in a controlled manner. To achieve this, the options were to spray them or place them in the controlled environment of a humidity chamber. Due to the delicate nature of the image, spraying was ruled out and humidification in a controlled environment chosen. The size of the enclosure for humidification was dictated by the need to . have access to the tracings during treatment.

b) the use of ultrasonic humidifiers;' this has the advantage that the equipment and its controls are outside the controlled environment ensuring ease of access to the object; it has the disadvantage that it cannot be left unattended due to possible water depletion or equipment failure resulting in a fire risk or uncontrolled increase in the humidity.

Ultrasonic humidification was chosen for this task due to the ease of control during treatment and the need to detect potential problems such as warping and
delamination of the paper.

A humidification chamber with vacuum table4  was considered, but its small size made it of limited use. An alternative was to construct a large tent-like structure which would enable access to the tracings and ensure that they could be unrolled to their full length in the work space as humidification progressed. The tent could be constructed from materials that were inexpensive and readily available. This latter option was selected.

The materials and equipment used were:

The tent was designed to be large enough to enclose the tracings after they had been unrolled and flattened, and to ensure that condensation could not drip on them. The tracings were supported by a piece of Terylene stretched over a frame and stapled to the underside to prevent corrosive contamination. This construction allowed the moisture to permeate the paper.

Before treatment commenced, the surface of the roll was cleaned with a soft brush to remove accumulated dust.

A humidifier was placed at each end of the work area with a hose directing the vapour into the tent. The data logger was placed outside the tent to record the humidity levels during treatment. Within one and a half hours of beginning the treatment, the relative humidity stabilised to around 75% to 80% within the tent. After a further five hours of treatment the object was examined; it had not relaxed sufficiently to unroll without risk, therefore treatment was concluded for the day.

After a further eight hours of treatment the paper was flexible enough for the end of the roll to be eased open and weighted under boards and felts. Over the next ten days the process was repeated until the roll was flattened to the full length of 365cm. The flattening of the innermost layers took longer than for the outer ones. The outer layers appeared more acidic and porous, and this could have been why they responded faster to moisture. 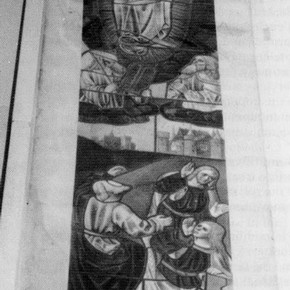 The humidification treatment revealed a vibrant watercolour image supported on a light paper pasted to a heavy backing paper (Fig.2). The backing was identified as thick cartridge paper which was more acidic on the outside exposed surface than the inner rolled surface. On the verso large brown marks were visible in the pasted area. All tracings were covered in a fine sooty dirt on the exposed edges of the inner layers and sooty dirt ingrained the outer surface.

Once flattened, it emerged that the one roll consisted of 11 tracings which required extensive cleaning. The mechanical cleaning was carried out using a soft brush, Drychem chemical sponges and erasers. This took some time due to the size of the tracings. To help support the tracings, the edges of the backing paper were repaired with Japanese paper and starch paste.

Custom made polyester bags (inert material) were constructed for the storage and handling of these large objects. Their eventual storage was likely to be in a plan chest especially bought for outsize objects at Blythe House.