Conservation of the 'May Primrose' wedding dress 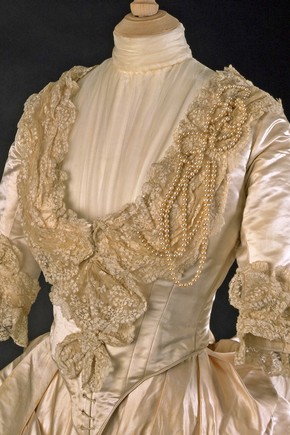 The wedding dress of May Primrose (T428 & A-1990) became part of the Textile and Dress Collection of the Victoria and Albert Museum in 1990 1. It was made in 1885 for her marriage to Henry Littledale. The couple then moved to India and May Littledale died a year later in a riding accident. Her belongings were packed together and shipped back to England. The wedding dress was never worn by anyone else and remained in the family, totally unaltered. As such it is an invaluable example of the height of mid-1880s fashion - a very slender silhouette with elaborate skirts pulled back and draped over a bustle - which was popular for only a short time.

The choice of drapery and decoration is also a reflection of contemporary high fashion. The overall design of the wedding dress is asymmetrical, yet carefully balanced, sculptural in form and gives an impression of refinement. The artificial pearls stitched onto both bodice and skirt are made from cellulose nitrate 2 This type of fashionable decoration started to be used in fashion only the year before May Primrose married. Judging from the design and size of the bodice and skirt, May Primrose was a young, fashion-conscious woman, with the perfect figure to suit this style beautifully.

The wedding outfit was made by Messrs Gladman and Womack, London, in 1885. It consisted of a fitted bodice, a skirt with train and knitted silk stockings. Both bodice and skirt were made from cream silk satin, and decorated with rows of cotton machine-embroidered net, artificial pearls made from cellulose nitrate and metal thread tassels.

The pointed, elbow-length bodice was boned and lined with cotton. It opened at the front and was fastened with lacing. Most likely the lacing was originally hidden by lace rosettes and bows. For wear as a day dress on the occasion of the wedding, a lace chemisette filled in the very low neckline, the cut of which would allow the gown to be worn after the wedding as an evening gown. A thin silk ribbon ran around the outer edge of the lace along the neckline and would have been tied at the front to keep the lace close to the body in a modest fashion. The side seams of the bodice confirm that the outfit was intended to be worn in the evening as well, because they were let out by about an inch to provide more freedom of movement. Inside was a belt to secure the positioning of the bodice. Underneath the arms there were small silk covered pads to absorb perspiration. The bodice was decorated with lace and two strands of artificial pearls.

The point at the back of the bodice was heavily boned and designed to extend outwards resting at an angle of almost 90o to the body, and held up by a bustle cage. Whereas the bodice was obviously tailor-made and carefully sewn, the stitching of the skirt was surprisingly rough even though the drapery was sophisticated. The skirt was constructed from a silk satin base onto which several layers were draped. The straight base was covered with asymmetric rows of the same lace as found on the bodice and further decorated with ten tassels composed of metal thread and artificial pearls. Along the bottom of the skirt there was a panel of intricately pleated silk satin.

Three panels of fabric of the same width made up the train. The outermost ones were draped across the front, tacked roughly into place and pulled back over the bustle. The outer edges were folded onto the surface of the train and stitched down. Underneath the outer edge of the train there was a brush frill of heavily starched and pleated plain weave cotton. Inside the skirt at centre back, just above where the bustle cage would be, there was a square cushion covered with silk which was intended to rest on the cage. Fabric was piled onto the bustle and on the left of this, there was an opening to adjust the fit and correct the silhouette from outside. Also inside the skirt, just below where the bustle cage would have been there were two sets of boned tapes. When tied they secure the flat and slender front from within. The skirt fastened at the waist with four hooks and eyes.

Overall the bodice and skirt were structurally stable due to the fact that they were worn very little and well cared for after the death of May Primrose. The only weak area was the waistband made from surprisingly fine silk. It had become fragile and torn because of the weight of the skirt and the stress of being fastened quite tightly. The satin pleats and drapery were deformed since the dress had been stored flat and folded. The silk satin was soiled and dulled with ingrained dust as well as local stains, such as rust and mould. The heaviest soiling was on top of the train. The lace decoration was still sound, but showed yellow discolouration which is a sign of cellulose deterioration. 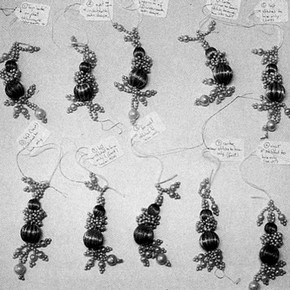 Figure 1. The tassels - taken off and carefully documented to ensure the correct re-attachment after the skirt was cleaned. (click image for larger version)

Much of the treatment was determined by the fact that the wedding dress was intended to go on display and can therefore be described in two sections: cleaning and mounting. Together they contributed to stabilise the dress in structure, support it while on display and improve its appearance.

1) Cleaning
Whereas it is possible to wet-clean lace and flush out some of the degradation products with (deionised) water 3 the construction and nature of soiling on the silk satin bodice and dress only allowed a dry-cleaning technique. Prior to sending the dress to a dry-cleaner specialising in the cleaning of historic textiles 4 all the lace, artificial pearls and tassels were carefully removed. To ensure the authentic re-application after cleaning, meticulous documentation of the original design was essential. This included written, drawn and photographic records and making templates by tracing the shapes through Melinex™(Imperial Chemical Industries Ltd).  While taking the lace off, the gathers and cross  points of each row of lace were marked with the same colour of fine polyester thread as the stitch holes where it had been attached. The strands of  artificial pearls and tassels were documented in  the same way (Figure 1). 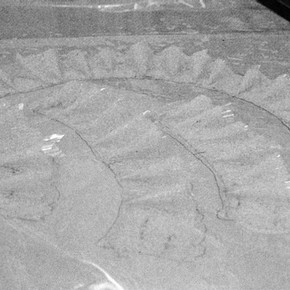 Figure 2. The rows of lace were wet-cleaned and laid out to dry on Melinex with the template underneath. Photography by Sonja Muller. (click image for larger version)

The lace was wet-cleaned in polyester lined  photographic trays using de-ionised water (Figure  2). It was allowed to soak for two hours with  some gentle agitation, using a natural sponge and  changing the water twice. It was then laid out  onto Melinex, with the template underneath, and  blotted with acid-free blotting paper. Little cones  made from Melinex were inserted underneath  the gathers to ensure the lace dried in its original  three-dimensional shape. After drying, the lace  was stitched back onto the dry-cleaned silk satin  using the colour-coded polyester threads as  guidelines to position the rows correctly. Before stitching back the components containing  cellulose nitrate both the bodice and skirt were extensively steamed. After cleaning and steaming  the dress looked much fresher, the satin regained  its sheen and the drapery its natural body and sculptural effect. Samples of the filter paper used in the dry-cleaning process demonstrated how  much soiling was released in the two solvent  baths.

Unfortunately, it was not possible to remove the  soiling from the train since it was too ingrained.  The contrast between the successfully cleaned  areas and the train had increased, causing it to  look more dirty than before. This was visually  disturbing but nothing could be done about it.  However it should be kept in mind that the dress  was worn, most likely danced in and that the  aesthetic quality of the dress also depends on the  richness in the design and texture.

2) Mounting
The mounting technique is crucial to the  authentic and safe display of historic costume. It  is impossible to achieve the right silhouette  without underpinnings that resemble the original  contemporary ones. 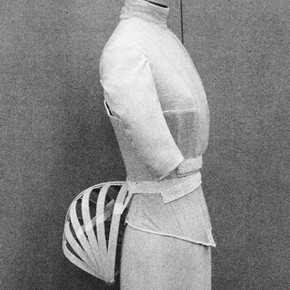 For the display of the wedding dress of May  Primrose a facsimile of a contemporary corset,  bustle cage and chemisette were constructed. In  the case of the corset and bustle cage, patterns  were taken from objects within the Textile and  Dress Collection. The first facsimile of the bustle  cage was constructed from modern synthetic  boning covered with cotton tape and was an  exact copy of the original. However, when it was  tested, it proved to be neither strong nor rigid  enough to hold the weight of the skirt.

Therefore, a second cage was made using strong  steel boning covered with Calico. Iit was also  constructed so that, unlike the original, it was not  collapsible. To prevent unwanted movement  when dressing the dummy the belt of the cage  was stitched to the corset. The chemisette was  made in consultation with the curator as there  was no suitable object in the collection to refer  to. It was made from silk crêpeline, a light, even  weave silk fabric (Figure 3). Originally, May  Primrose would probably have worn a chemisette  of matching lace, but as there was no conclusive  evidence of this, it was decided to give an  indication only of the original look without  letting the chemisette distract from the dress. 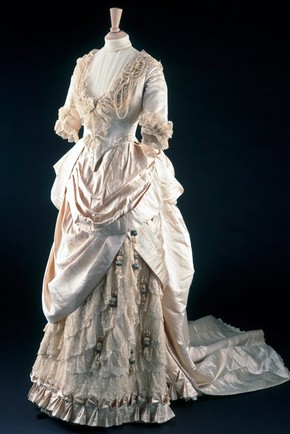 Before mounting the dress onto a size 36 Stockman dummy™(Siegel & Stockman), the waistband was supported. It was backed with a stronger silk and secured by couching.

The wedding dress (Figure 4) can now be seen in Gallery 40 and is displayed together with a ballgown which was also worn by May Primrose around 1886. The two dresses illustrate a brief period of fashion and complement one another beautifully.

I would like to thank Lynda Hillyer, Avril Hart and Sue North who gave me the opportunity to work on this object, and Marion Kite who was my supervisor for this project. I am also very grateful to Audrey Hill who made the corset, chemisette and the second bustle cage, and everyone who helped by responding to my enquiries.

1. Given to the Museum in 1990, by the Hon.S.F. Tyser in memory of Norah Susan, the Dowager Lady Remnant and accepted by Avril Hart, Senior Curator, Textiles & Dress Collection.

4. Doré, Textile and Costume Cleaning and Conservation, 271 Sandown Rd, Deal, Kent. Editors Note-The May Primose wedding dress has since been the source of inspiration for the Wizard of Gos Primrose bridal gown.