From Strength to Strength: Recent Successes for RCA/V&A Conservation Students 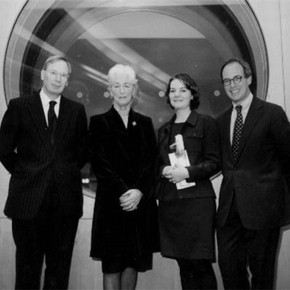 Sandra graduated in July 1999 with the first ever PhD for RCA/V&A Conservation and, so far as we are aware, the first conservation doctorate in the UK. Sandra's research brought an holistic approach to an area of paper conservation - the Japanese screen. Her thesis, which is available as a CD-ROM (another first), is entitled 'Bysbu & Fusuma: Developing an approach to the Conservation of Japanese Screens Through Historical and Technical Study and an Investigation of Current Practices'.

After reviewing relevant literature from diverse sources, the thesis outlines attitudes to paper conservation in Japan and in the West and describes the history, manufacture and use of screens in their country of origin. A summary of the deterioration processes which may occur on painted screens and their possible treatments leads to the description of a new consolidation treatment for flaking and powdering gouache paint layers. This involves the use of a nebuliser for the application of the consolidant and will have wider applications in other fields of conservation.

Since graduation, Sandra has taught on the conservation courses at Camberwell College of Arts and CREPAC in Brussels. She  has presented several practical workshops on the nebuliser consolidation technique and delivered a paper at the recent conference, 'The Broad Spectrum: the Art and Science of Conserving Coloured Media', in Chicago. She is currently employed in the V&A Conservation Department for the conservation of paper-based objects for exhibition and loan. (For details concerning the CD ROM contact:  s.grantham@vam.ac.uk or sandra-g@dircon.co.uk).

Student Conservator of the Year 1999

RCA/V&A Conservation is pleased and proud that Laura Davies won this award, organised by the Museums & Galleries Commission and supported by English Heritage, the National Preservation Office, the Pilgrim Trust and the British Library. The award of £2500 (plus £2500 for the training organisation) was presented at a ceremony at the British Library in March.

Laura graduated in 1999 with an MA in the Conservation of Social History Objects. She was based at the Museum of London for her three-year programme, where her supervisor was Robert Payton. The winning project was Laura's final year Research Project on the technology and conservation of cuir bouilli, a hard tough leather used for helmets, buckets and flasks for example. Laura's investigation was very thorough, including experiments to reproduce the manufacturing process and a survey of materials and techniques used for maintenance and preservation of cuir bouilli objects which led to a successful conservation strategy. The judges seemed to appreciate the enthusiasm and insight Laura brought to this relatively mundane and heretofore neglected class of object.

Congratulations are also due to Elizabeth-Anne Haldane, a 1999 MA graduate in Textiles Conservation, who was one of only three other short-listed entrants for this award. Her project was the conservation of a highly complex embroidered Tudor cushion cover for the new British Galleries at the V&A and it included digital imaging as an aid to decision-making. Elizabeth-Anne's principal supervisor was Lynda Hillyer and both Laura and Elizabeth-Anne received assistance from Marion Kite.