Improved Methods of Storage for Illuminated Manuscript Fragments on Parchment 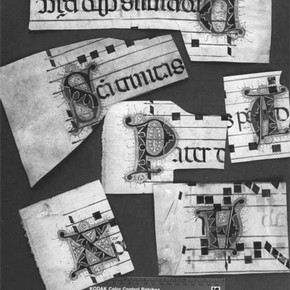 The collection of illuminated manuscript fragments in the National Art Library (NAL) at the V&A, reveals the 19th century enthusiasm for  Medieval illuminated manuscripts both as a work of art and as a subject for research and study. It consists of highly decorated initials and images which were cut  from texts, and of whole pages taken from choir books or holy scripts 1 . The collection is comprised of many fragments of different sizes, and prior to this project were stored in the NAL's archive in six drawers of a plan chest. One hundred and forty seven larger items were mounted on acidic boards, hinged to or loose in their mounts.

These needed cleaning and minimal conservation treatment. Labels and inscriptions on the mounts gave information about their circulation. They were grouped according to their country of origin.  Two hundred and thirty three smaller fragments were stored loose in archival envelopes without any interleaving. Many of these were flat, decorated letters and initials, but some envelopes contained high relief illuminated letters in pigments and gold. The main aim of the project was to re-house the collection and to allow improved, safe and convenient access to it for research purposes. The NAL staff and the curator, Dr Rowan Watson,  were consulted throughout the process of planning and work.

Design and Construction of Storage Enclosures

The primary  need prior to re-housing the collection was to carry out  a thorough survey to establish fragment type and condition, as well as recording  their dimensions and any historical information. A representative sample of object types were taken to the studio and studied in order to design various storage solutions. During the design phase various characteristics of the fragments were considered. For example, parchment tends to move and distort when exposed to changes of  environment - fluctuation in relative humidity and temperature being of prime influence. The media (iron gall ink,  pigments and gold) are sensitive to manipulation of the support or abrasion, especially when in a degraded or friable state.

The weight of the paper support and the method of hinging were also considered so as to allow adequate space for possible movement in the parchment. Tests were made to find the ideal mechanism for opening the page and observing the objects on both sides, as well as protecting them before turning the page over. Size, weight and media sensitivity of the objects dictated their placement in the different enclosures, as well as safe handling requirements. In consultation with Book Conservation, Conservation Mounting and NAL curators, three storage solutions were developed: 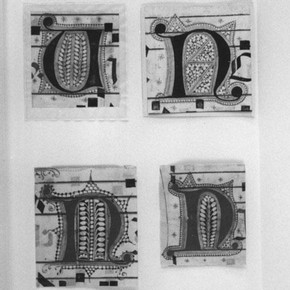 1. Fascicules:  Fragments which were simply illuminated initials in blue and red and where the parchment surface was mostly flat and stable, were to be placed in  fascicules. Fascicules are a single section binding  developed by Christopher Clarkson, at the Bodleian Library, Oxford, in 1980 2 . (The fascicule is sewn  to a five hole pamphlet binding with a cover of manila grey card, 225gsm). This binding consists of bifolios and extended single leaves to form the stubs.

A special jig 3  was made in the V&A Joiners' workshop to Christopher Clarkson's specifications to assist with the accurate positioning of the folios. Eleven made of 160gsm archival rag endleaf paper were sewn, creating a wider stub and an extra flap to cover the objects for their protection. The fragments were hinged with plenty of space around each fragment, to be viewed on both sides, with the stub providing the protective space above them. The fragments took up eight fascicules which were then stored in groups of four in  Archival Die Cut™ storage boxes (Type C7 P).

2. Enclosures : Careful handling and additional protection was required for those fragments which were cockled, had friable pigments, or which had ornament in high relief and applied gilding. This type of enclosure was also appropriate for borders and pages which were in a weak condition where the iron gall ink had been abraded or where the parchment surface itself was damaged by mould or friction. Two-flap folios were designed to accommodate these factors. A heavier paper (315gsm Heritage) was used as a backing sheet on which to hinge the objects, and a lighter weight paper (160gsm archival rag endleaf) was used as a cover sheet.

This  was adhered along the long edge of the heavier backing paper to create a folio. Ten folios were stored in each  tray, (made of archival quality corrugated paper and card) and each tray had  an access slot in the long edge, to make it easier to lift the folios from the tray. The trays were then stored in the Archival Die Cut™ boxes (see above) - two trays to a box. Larger folios were created for pages in larger dimensions and placed into large trays, which were in turn stored in  Solander boxes.

3. Mounts: The biggest and most highly illuminated  pages were mounted in Museum Board. Some were simply hinged in with 'V' hinges (see below), and some were attached using a system developed in  V&A Conservation Mounting, which uses Melinex® expandable slotted hinges and Japanese paper tabs to attach the object 4 .  A deep three-sectioned mount, incorporating a Melinex® 'window' was used to reveal both sides of the object. The mounts were stored in  a Solander box.

After the preparation of the enclosures, the rest of the objects were transferred to the studio and the whole collection was treated. Most of the loose, flatter fragments that had been housed in the envelopes were in good condition. All of the fragments had remnants of  hinges of various tapes adhered to them. The iron gall ink and red and blue pigments for initials were tested with water and found to be stable.  A poultice of  very thick methyl cellulose swelled with water was used as this allowed for the controlled application of moisture to remove  the hinges.

The fragments were then hinged into the fascicules with V-hinges, made of a Japanese Kozo paper of a similar weight to the parchment. These were attached with a dilute wheat starch paste. The fragments were arranged two or four to a page, according to their size, with enough distance from the stub to avoid abrasion when being turned over. The fascicules were stored four to a box, which provides enough space to allow the parchment fragments to move and adjust to the new supports. 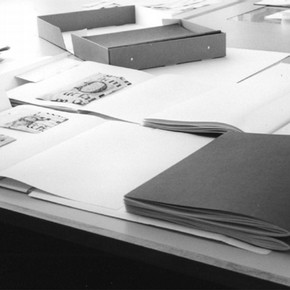 The gilded fragments with high relief were found attached, in most cases, to a paper secondary support or small paper mounts. As the parchment looked flat and well supported, the supports were left intact. Old hinges which concealed the image were removed. Some letters or initials illuminated with pigments and gold had areas which were abraded and tarnished in some places, and under the microscope, the gold relief was seen to be cracked.

Fragments that had losses or friable areas were consolidated using isinglass glue (inner membrane of the swim bladder of the Sturgeon fish), which has a low viscosity and adheres quickly. Tiny amounts of acetone were applied just beforehand to encourage the penetration of the isinglass. Successful re-adhesion of the flaky pigments was achieved, and the risk of loss of the image in the future was reduced.

These were then hinged into the two-flap folios using wheat starch paste and Japanese Kozo paper.  The heavier card support and the cover of the paper on top provided a comfortable cushion to the relief pigment on the often cockled parchment due to the weight of the media. The folios were placed in the trays, according to their size, and then in the storage boxes. The previously mounted illuminated borders, some of them up to 420mm in length, required the same treatment as the gilded letters.  These were also placed in larger paper folios (420 x 520mm) and trays, of a size (570 x 470mm) that could contain them conveniently. Many of the mounted objects were not fragments but whole pages taken from choir books, prayer books, the Bible, and other texts. The parchment was slightly cockled and discoloured at the edges, but the inks and the pigments were stable and in good condition.

They were unhinged from the acidic mounts, then cleaned and re-hinged into the bigger folios. Larger objects invariably weigh more and this required an increase in the number of hinges applied as well as the use of T-hinges to strengthen the attachment of the parchment to the paper and to allow safe turning of the page. The hinges were attached to the parchment at only a few points, so as not to restrict any movement of the parchment on its new support. Gelatine repairs (using parchment pared to the thickness of the original, and 10% gelatine in water) were carried out on four of the pages which were weakened by mould and losses. The whole collection is now house in four standard box-board boxes - one royal, one imperial and three half imperial Solander boxes.

Prior to this project, the collection had been stored in envelopes in piles in a plan chest and drawers in the NAL. This made it difficult to find a particular object, to monitor the condition of the fragments, as well as to study the historical and aesthetic  value of the collection. The collection was studied carefully beforehand, in order to plan and execute efficient and adaptable solutions to its preservation and storage.

As a whole, the results are satisfactory from both practical and aesthetic aspects. The fragments have been treated and are now arranged and numbered, hinged in proper enclosures and are to be catalogued soon. The collection is stored economically and safely and with improved access to the public. The boxes, when shelved, will take only a third of the space previously occupied. The beauty of the objects can be appreciated and their historical information can be studied.

1. Watson, Dr Rowan., Vandals and Enthusiasts: Views of Illumination in the 19th Century. Introduction to an exhibition in the V&A, January 1995

2. Lindsey, H. and Clarkson, C., Housing single-sheet materials - the development of the fascicule system at the Bodleian Library.  The Paper Conservator, Vol 18, 1994 pp.40-48

3.  jig: a wooden frame with metal sewing bar, made to the dimensions of the paper, see Lindsey, H. and Clarkson,C., ibid

4. Norman, D., The mounting of single leaf parchment and vellum objects for display and storage.  V&A Conservation Journal, no 9 October 1993

I am very grateful for the help and generous advice of my supervisor throughout this project - Merryl Huxtabe, and to the very supportive colleagues in the Paper Conservation studio.  Danny Norman and Clair Battisson in the Conservation Mounting studio.  Bridget Mitchell in the Book Conservation studio.  Dr Rowan Watson, Elizabeth McMurray and the staff in the National Art Library.  Bill Johnson and collegues, V&A Joiners for construction of the jig.