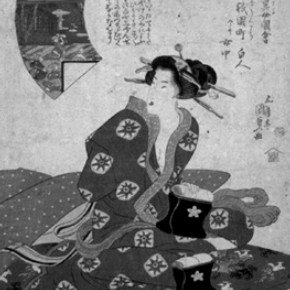 From autumn 1998 to summer 2000, as part of an MA in Paper Conservation, I studied traditional Japanese prints, known as ukiyo-e prints. These were mainly produced in Edo (central Tokyo today) and Osaka, between the seventeenth and nineteenth centuries. They show notable differences to other print productions, as initially they were mainly produced for publications or for private distribution, rather than as artworks. Their production was closely linked to Japanese crafts used at the time; for example, many of the materials used as colorants were introduced from ones used in dyeing processes. I undertook a survey of conservation treatments used on ukiyo-e prints and a technological study of the materials and techniques used in production.

While studying conservation treatments of ukiyo-e prints, I looked at the types of damage commonly found, possible treatment methods and how far these treatments could be applied. A frequent problem is a translucent stain in the support paper, caused by an additive in the papermaking. This additive is rice starch, which is ground with water into an opaque solution. When added into the fibre stock, the rice starch tends to aggregate and forms a lump between fibres. Because the lump has a smooth surface, it repels dirt and leaves it trapped/adhered between the fibres in other areas.

With the ageing of the support paper, the difference in appearance between the lump and other areas becomes visible and the lump shows as a stain, which is slightly whiter than surrounding areas. Such stains are very difficult to remove and their visibility may only be reduced by removing the dirt from surrounding areas. Rice starch, in its un-cooked state, is gelatinised by high temperatures ranging from 68 to 78 °C 1 . Heating above this temperature will cause damage to the support paper. This is considered to be the reason why Keyes restricts the application of heat in the conservation treatment of ukiyo-e prints. 2

The technological study of the materials and techniques used in print production was carried out as a major research subject. A book entitled Nishiki-e no Hori to Suri has been regarded as the most valuable source of information on the production of ukiyo-e prints 3 . From a conservator's point of view, however, it gives rise to many questions. A research trip to Japan helped answer some of these questions and uncovered other valuable information. I visited the few Japanese manufacturers still engaged in the production of tools and rare colorants and recorded the procedures at first hand.

Among the materials I surveyed were two colorants called dayflower blue and safflower red, which I investigated further as part of my final project. The aim of the project was to gain a deeper understanding of the history, the properties and the production of these two colorants. Samples of the colorants obtained during the research trip were printed on paper using the traditional printmaking techniques to show their original state before degradation/fading. The fresh colours in printed states are rarely seen today and will help conservators and historians in the assessment of those colours seen in ukiyo-e prints. 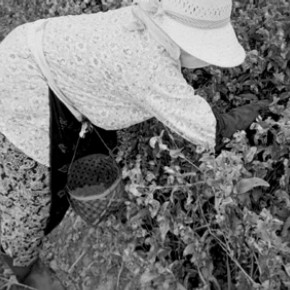 Dayflower blue (Commelina communis L.) is  one of the most fugitive colorants in the presence of the slightest moisture and light. Although the name is well recognised, the production of the colorant has not previously been studied in conservation. The earliest example of the use of dayflower blue can be found in the famous eighth century poems, Man'yôshû. Dayflower was described as a dyestuff by the name tsukikusa (literally meaning moon grass) and the unstable blue colour seen in dyed clothes was often cited to describe ephemeral love.

By the Edo period (1600 - 1868), the flower was also called tsuyukusa (literally dew grass) and bôshibana (literally hat flower). Although there were many dialect names for the flower, the name tsuyukusa was widely used. This is the reason why the blue colour produced by dayflower seen in ukiyo-e prints has often been called tsuyukusa. The name of tsuyukusa can be found in literature stating that it was used for dyeing in some areas until the beginning of the Meiji period (1868-1903). 4

There are a few people still involved in the production of the colour. The method of producing dayflower blue is fairly simple and does not appear to have changed since the Edo period. The detail of the techniques used in the production was extremely useful for understanding the colour. The colorant was obtained from petals of modified (plant breed improved) dayflower, aobana (literally blue flower). Collected petals are squeezed and then the blue liquid (colorant) is applied to a paper, which acts as a carrier for the colorant. This paper carrier is then called aobana-gami (aobana paper) or ai-gami (literally blue paper).

The properties of this colour are remarkable and this explains many of the differences between it and other colorants. One example is the colouring matter, which is exactly the same in both wild species and modified dayflower. It is called commelinin 5 and is unusual in that it is supramolecular, with the outside of the supramolecule surrounded by a number of hydroxide fragments. This explains why dayflower blue is extremely fugitive in contact with moisture. Most colours, although they bleed and smear in the presence of moisture, do not move completely and will usually stay in the paper once it has dried. The blue colorant of dayflower however is moved completely, rather than smeared, in the direction of the moisture, leaving no trace behind in the paper. This fugitiveness is frequently seen in ukiyo-e prints and makes optical identification of this colour easy.

Past descriptions of the use of dayflower as a dyestuff would seem to indicate that it can withstand a high temperature. The blue colour is also stable in its dried state. According to Coombs and Keyes, dayflower blue shows two different types of blue colours: greyish and clear blue. 6 The blue obtained from new paper carrier (aobana-gami) gives a clear blue colour, while an aged aobana-gami shows a shadowy blue colour, which resembles the greyish blue seen in ukiyo-e prints. Importantly, the clear blue colour is more light fast than the shadowy blue colour so the different appearance of the blue can be explained by the ageing of the paper carrier. 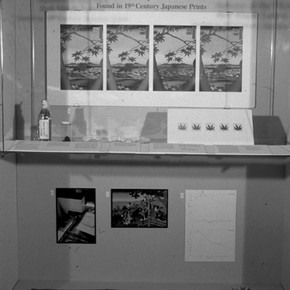 In addition to my final project, I conducted an investigation into other colorants. One of the projects was on red lead pigment, which often shows a characteristic lustrous discolouration, particularly in nineteenth century prints. Some genuine prints featuring red maple leaves were selected from the V&A collection and were examined technically and scientifically using Raman microscope and UV light. With reference to the study by Walsh et al., which presented experiments in the making of silvery discoloured lead pigments 7 , I demonstrated how discoloured red lead could be produced and employed in printmaking using the materials available at the time.

According to my survey, there is a suggestion that the lustrous discoloration can constitute evidence of an early date for editions of certain ukiyo-e prints. I made facsimiles of prints showing the discolouration and then compared them to four editions of Hiroshige prints, which also feature red maple leaves. The result illustrated the value of this research, which combined technical, scientific and historical investigation with the conservator's understanding of objects.

My research was displayed in a main entrance showcase at the V&A from 11th September to 30th October 2000 under the theme, 'Autumn at the V&A'. The display also introduced the audience to some aspects of Japanese culture by using the seasonal theme, which is so important in Japanese art and life. Through this project I am have been nominated for the Student Conservator of the Year Award by Re-source.

Since graduation, I have continued practical work and research at the V&A, on the conservation of ukiyo-e prints and I am hoping to contribute to the conservation, exhibition and storage of these wonderful artworks.

I wish to thank the craftsman and researchers who have given me their knowledge, based on their long-term experience. My research was generously supported by The Great Britain Sasakawa Foundation, The Daiwa Anglo-Japanese Foundation, Rio Tinto plc., and The Gen Foundation.