Chinese wallpapers in the British Galleries 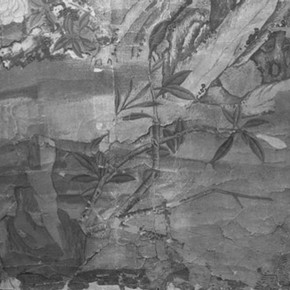 The V&A has one of the finest collections of Chinese wallpapers. The examples selected for the British Galleries aim to show the range of styles and subject matter of Chinese wallpapers rather than trying to recreate a room. They are all from the first half of the 18th century:

Like decorated porcelain and paintings, wallpapers were manufactured in production-line workshops. Working to a copied design and with labour divided according to skill, a team of painters would produce sets of wall papers to decorate entire rooms. There could be as many as forty rolls in a set, each roll measuring 3.5 x1 m, plus extra sheets of birds, butterflies and branches. Subject matter included floral sprays and arabesques; life-size flowering shrubs and trees with birds and insects; figures in architectural settings; panoramic landscapes with architectural details; figures depicting festivals, agricultural activities and trades.

Materials and techniques of Chinese wallpapers

Chinese wallpapers are made up from large sheets of paper (average 56 x 91cm) joined and laminated together with a starch-based adhesive. The papers are very thin and flexible. Research has identified Xuan paper fibres from the than tree (Pteroceltis tatarinowii maxim), paper mulberry bast fibres (Broussonetia papyrifer) and bamboo fibres (Bambusa sp. or Dendrocalamus sp .).

In many cases the support paper onto which the design is executed had been coated with white pigment bound in animal glue and alum and dusted or mixed with mica, which gave it a shimmering appearance like silk. This type of paper coating was developed in China in the fourth century to improve the paper’s smoothness, whiteness, opacity and uniformity and to reduce the hygroscopicity and ink absorption. A black carbon ink outline of the design was drawn onto the prepared sheet and then filled in with flat colour (organic and mineral pigments bound in animal glue). Details and glazes were added last. Where translucent colour was required – e.g. for faces – colour was sometimes applied to the back of the paper.

Other methods for executing the design or adding detail include the use of small printing blocks for repeating foliage texture, multiple brushes for grass, stencils, line block printing and decoupage. 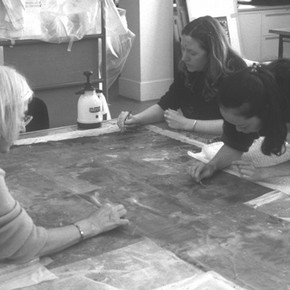 The joined and painted lengths of paper were often sized with alum, causing the binding media to harden and making the colours resistant to water. Backing papers were applied to the painted lengths, smoothing out wrinkles and distortions. After drying and flattening on boards, the wallpapers were trimmed, organised into sets and numbered in the sequence in which they were to be hung.

In historic houses wallpapers were often pasted to textile linings tacked onto wooden strainers secured to the unfinished walls with nails. The use of a textile support not only provided a flat surface but also enabled the wallpaper to be removed if the decorative scheme was changed.

(Figure.1). The design was drawn in black ink and filled in with colour. Small wood blocks had been used to create the texture of the foliage. Rocks, trailing branches, leaves, butterflies and birds had been cut out from other sheets of paper and pasted onto the wallpaper in order to make repairs, hide faults or enhance the paper. The sections conserved for the British Galleries had remains of two textile linings that had once held them to the wall of the dressing room at Eltham Lodge, Kent.

These were originally part of a series depicting Chinese figures and buildings in a rural landscape. This wallpaper is unusual in that the outlines were not drawn in ink but printed. Examination revealed information about the size and method of use of the printing blocks. Sheets of paper measuring 166 cm x 82 cm were joined and laid across the inked-up design. The design had then been coloured in by hand. Other, smaller wood blocks inked with colour, had been applied to areas where the image was repeated, such as leaves and grass.

Stylistically this wallpaper is very different to the other two. It shows a Chinese gentleman and lady in a rural setting surrounded by a shell cartouche. The catalogue entry suggests that the Chinese painter copied the ornamental framing from a print of 1710-1720 by Jean Antoine Watteau. To make up a complete length, fragments of the wallpaper, together with their original backing of bamboo paper and mulberry paper, had at some time in the past been lined with cream wove paper and textile and attached to a wooden board.

Condition of the wallpapers

All three wallpapers had suffered extensive damage. The paper that was originally white and shimmering with mica had become brown and brittle. What were once vivid colours were faded and dull, the subtle glazes having disappeared. De-lamination of the thin top layer of the Chinese paper was widespread; the paper was easily shattered and losses were severe. Losses had been previously patched and the excessive amounts of adhesive used were now discoloured and unsightly. Coarse, heavy European papers had been used as lining papers. The wallpapers were heavily soiled and had sustained some water damage. Past attempts to clean away disfiguring stains had resulted in an uneven and abraded surface. The papers had been patched and over-painted in attempts to hold them together and try to preserve what remained of their original beauty. E.51-1968 Fragment – Chinese Gentleman and Woman, showed evidence of mould damage with fine black spots throughout.

The aims of the conservation treatment were the consolidation of the fragile structures of the wallpapers, the selection of a mounting method appropriate for long-term display and to use the repairs to re-integrate the design, thereby minimising disfigurement and improving legibility. Conserving large paper objects on this scale requires good planning, adequate space and time. Experience and expertise in treating large wet sheets of degraded paper was also essential since they measure 285 x170 cm and are as thin and as delicate as cigarette paper! Knowledge of Japanese and Chinese mounting techniques has also contributed to an efficient and effective method of working with objects of this type and scale.

Treatment of the wallpapers involved:

Each procedure listed can be further broken down into numerous processes. Some of the more complex procedures will be outlined. 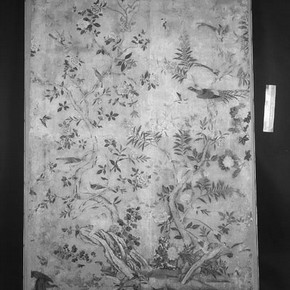 Removing the linings from degraded wallpapers is the most difficult and risk-laden procedure. It is only carried out as a last resort. It is essential that enough uninterrupted time is given to the process of removing linings and that it be followed immediately with re-lining.

E.2083-1914 Flowering Plants and Birds and E.412&413-1924 Scenes from Everyday Life both had their textile, and European papers removed. Only the buff-coloured Chinese bamboo paper was retained where possible as it was part of the original laminate. The wallpapers were first sprayed with water from the back and then on the front and then faced with Rayon paper for protection and cleaning. The Rayon paper held the de-laminating paper in place, helped to draw out discoloration and cushioned the surface of the paper.

The textile linings were removed dry; all other paper linings were removed after humidification. When the paper is wet it is almost transparent and it is difficult to distinguish between the painted paper substrate and the linings. At this stage the paper is extremely fragile and is easily damaged and if left to dry out it would fracture. For this reason, re-lining was carried out almost immediately while the papers were damp. The wallpapers were lined with sheets of Japanese handmade paper using wheat starch adhesive.

Mounting the wallpapers onto Hexalite

Hexalite was the chosen method of support for wallpapers and textiles in the British Galleries. It is made from an hexagonal aluminium core between fibre glass sheets. The board is considered to be chemically inert, is lightweight, rigid and dimensionally stable. Devising a system suitable for the conserved wallpaper and the display environment was time-consuming.

The Hexalite sheets were joined to make up panels of the required dimensions. The boards were first covered with Melinex and then with a woven polyester fabric. The nap of the polyester was raised to give a better key for the adhesion of the subsequent layers of paper. The textile was covered with a layer of soft, lightweight Japanese hand-made paper, brushed and tamped to achieve a good bond. The next paper layer is one traditionally used in the construction of Japanese screens. It is known as the ukekake from uke meaning floating and kake meaning to hang. These papers were applied as quarter sheets with the fibre direction running horizontally. They were pasted at the edges, each overlapping the last sheet by 6 to 10 cm, creating air pockets for cushioning and a separation layer that would enable the wallpaper to be removed from the panel if necessary in the future. The final layer, onto which the wallpaper was finally pasted, is called the ukeshibari, shibari meaning to fasten.

This was carried out in two stages. Cracks and abrasions were toned with watercolour to the buff background colour of the paper. Coloured Chinese Xuan paper was used to repair losses to the wallpapers. Each loss was traced and the repair was then cut from the dyed repair paper, pasted and fitted. Large areas of repair were made to the lower section of E.412&413-1924 Scenes from Everyday Life. The wallpaper E.51-1968 Fragment – Chinese Gentleman and Woman that, prior to the current conservation, had been lined with a cream European paper, was given more sympathetic in-fills of appropriate colour and texture. Final retouching was carried out with watercolour and Carbothelo pastel pencils to allow the design of the wallpapers to read more easily.

Special thanks to Victoria Button who worked with me on the project.