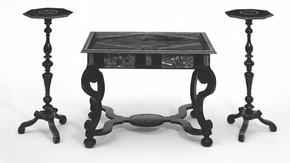 The Far East had an enormous impact on the decorative arts in Britain. Objects from the Far Eastern Collection are displayed in the British Galleries alongside the European objects whose design was inspired by them. The Althorp triad, now on display in the British Galleries, is a particularly fine example of furniture that incorporates both oriental lacquer and western japanning.

The term ‘triad’ is used by some historians to describe a set of furniture consisting of a table, looking glass and pair of stands. Such groups of furniture were used as a decorative focal point in grand rooms during the Baroque period. The Althorp triad (Figures 1 and 2) consists of a large mirror (W.74-1981), table (W.74A- 1981) and two candlestands (W.74B and C-1981). Whilst the mirror, table and one candlestand have been dated to c.1680, the second candlestand (W.81C-1981) is a reproduction made in 1981 to complete the set.

The 17th century witnessed a growing European fascination with decorative art from the Far East in general, and lacquerware in particular. The earliest lacquerware arrived in Europe via overland trade routes and later larger quantities were imported by ship by maritime nations such as Holland, Portugal and Britain. The prevailing ignorance of the Far East led to a promiscuous characterisation of all lacquer articles as ‘Indian’, regardless of their geographical origin. Lacquerware was known in Elizabeth I’s reign (1558- 1603) and ‘Jappan’ articles began appearing in inventories by the early 17th century 1 .

Oriental lacquer is produced in China, Korea, Japan, Vietnam, Thailand and Burma, from the sap of the local Rhus species of tree (family Anacardiaceae). Once processed, the sap can be used to create an extremely durable coating. The traditional production of good quality lacquerware was a time-consuming process. John Quin2 , who set out the materials and techniques used to produce lacquer in Japan at the end of the 19th century, described the thirty three stages necessary to produce a plain black lacquer background. Depending on the complexity of the decoration applied to this background, high quality articles of lacquer took many months to complete. The finished piece usually incorporated a background that combined lustre and a translucent quality. Contrast was provided by mother-of- pearl inlay and gold decoration that depicted both Japanese pictorial scenes (e.g. figures and pagodas), as well as floral and geometric designs.

Such was the 17th century enthusiasm for these exotic articles that demand soon outstripped supply. European craftsmen responded by imitating lacquer designs using Western materials, a technique known as japanning. They used pigmented spirit varnishes that dried rapidly and allowed the japanner to use multiple layers to create a translucent glossy background which could be decorated with chinoiserie designs. 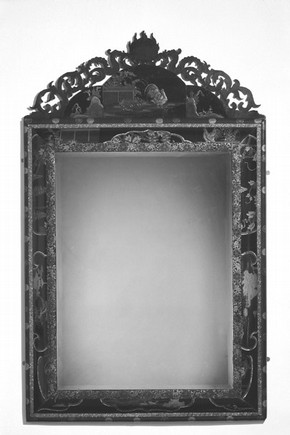 Lacquer objects imported into Europe could either be displayed intact (e.g. the Coromandel screen 130-1885, also on display in the V&A’s new British Galleries) or dismantled, cut up and incorporated into Western furniture forms. European cabinetmakers often employed both Eastern lacquer and Western japanned surfaces on a single piece of furniture. In many cases lacquer was used for the primary decorative elements whilst japanning was utilised for secondary elements (e.g. underframes or turned components).

Where lacquer was incorporated into a Western form, the European cabinetmaker was often primarily interested in the exotic decorative effect of the contrasting black and gold decoration and only marginally interested in the coherence of the original pictorial designs.

The original parts of the Althorp triad are a testimony to this decorative and material tradition. In common with similar objects of the period, the triad incorporates both Japanese lacquer and European japanning and is a good example of the fusion of Far Eastern influence and European design in the production of luxury goods. The Althorp triad incorporates lacquer from at least five (and probably more) different Japanese lacquer objects of varying styles and quality that were produced in Japan between c.1590 and 1660.

On the mirror frame, for example, several pictorial panels, probably originally part of a chest (or chests) have been cut into strips. Although the strips have been arranged symmetrically on the frame itself, the original design has been rendered meaningless. Similarly, lacquer has been used in the oval panel in the centre of the underframe of the table. Several strips of lacquer have been added to bring the oval to the required dimensions. Although all the lacquer used in the oval is in the same general namban style, the additional strips have been added without any particular regard for the original pictorial design.

The overall quality of the triad is very high. Several pieces of good quality lacquer were incorporated into the triad and the use of lacquer was not limited to the main decorative areas. Plain and decorated lacquer panels were used not only on the table top, for example, but also on the rails and drawer fronts. An unusual feature of the drawers is that the interiors were also constructed from lacquered components. Curiously, the components of the dovetail joints on the drawers appear to be to have been reversed, with the pins cut on the drawer sides and the tails cut on the drawer fronts. European japanning was limited to areas such as the scroll legs, parts of the stretcher and bun feet.

Long exposure to light causes lacquer surfaces that were originally lustrous and glossy to become dull and matte. In common with many other materials, light can also cause changes in the colour of lacquer. In the case of the Althorp triad, remnants of the original colour were found where overpaint was removed from the mouldings on the candlestand (W.74B-1981). These remnants suggest that the original appearance of the candlestand (and perhaps similar areas on the table top) was a rich and striking orange-red, rather than the present silver-grey.

Many objects have suffered repeated restoration over the years. Conservation treatment aimed to stabilise the original decoration. The triad is now displayed in a condition that honestly represents the passage of time.